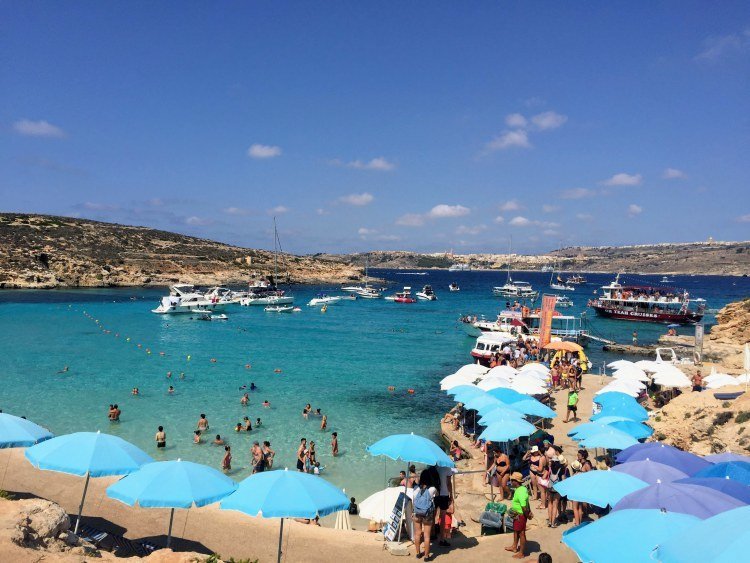 The Blue Lagoon with Kids, Malta

Your best bet to enjoy an uncrowded picturesque Blue Lagoon is to arrive early. This can be done by taking the ferry. Ferry rides cost about €10/per person. They run on a “regular” schedule. (Everything is on ‘Malta’ time, which is analogous to ‘island’ time.)

Departure times vary by season. You can check the Comino Ferries Co-Op page, but also confirm with someone at the dock . We boarded a 9:00am ferry that took us and some workers for the hotel on the island and headed over to the Blue Lagoon.

The ferry ride takes 20-25 min and is incredible scenic. The co-op runs a variety of boats depending on crowds and what else they are hauling. They are not all covered so be prepared for sun and wind on your ride over.

In order to enter the Blue Lagoon you have to sail through the one opening to the ocean. The only people that beat us into the lagoon were those with their own boats.

The Blue Lagoon tours leave later and therefore arrive later to the lagoon. Also the boats hold many more people than the ferries, so when you come ashore it is with your entire boat. You are also limited to how much time you spend on the island. Taking the ferry let us decide how much time we wanted to spend there.

We took advantage of the early arrival and had the place to ourselves for over an hour. There was plenty of space to swim and lots of fish floating around. The kids had an easy time in the water and we could easily see them and give them some freedom. Once the larger boats started to arrive the water was packed making the kids swimming more dangerous.

The sea also is calmest in the morning. We could easily swim around when we arrived at 9:30, but by noon the water was throwing people around and a large current had developed through the middle of the lagoon.

The First Beach is the Best for Kids

There are basically two places to enter the water at the Blue Lagoon. The first beach you encounter as you exit the boats is the best for kids. There is a gentle entrance here and the water is shallow.

If you walk a bit further on the beach, or come around the corner of the lagoon via the water there is another beach. This area, strangely, gets far more crowded. It is also not as gentle for the kids. As it is where the water passes through the lagoon it also develops a current.

The beaches get super crowded and there is not much room. We packed just the necessities, including floats for the kids, into one bag that we could have with us near the shore. If you have too much stuff it will really inhibit your ability to get around.

Every inch of the land is covered with chairs and umbrellas for rent. When you arrive early consider renting an umbrella and chairs if you think you are going to be there for a while. The closer you are to the beach the more your umbrella will cost.

When we arrived there was no one there so we just threw our things down by the beach. We had read the tip to rent an umbrella and chair early and ignored it. We didn’t anticipate we would make it very long with the kids anyway. The island quickly filled up and we didn’t have anywhere to sit.

When it came time for lunch we found a few little rocky spots to perch everyone, but were jealous of those who had a shady place to rest. It is certainly not a game-ender to not rent a chair, but it would have made our lives a bit easier.

Bring Your Own Float

If there is any chance you or your kids are going to want a float, buy it on the island and bring it with you. The markup is huge. We came prepared with floats for the kids and were glad to have them with us. We also made it clear that we wouldn’t be buying novelty floats since we had no way to get them back to the Netherlands with us.

Eat Lunch At The Blue Lagoon

Walk up the hill and you will find a ton of food trucks and vendors. We took a lap and found something everyone would like and enjoyed our treats sitting up on the rocks. We ate around 11:30 just as the tourist boats were arriving and avoided some crazy long lines.

When It Gets Crowded Leave

Once things start to get crowded it is not an enjoyable (or safe in my opinion) place to have kids. The narrow paths that run up and down the island get overcrowded with people drinking too much and not watching out for little people. The water also gets crowded and makes it more difficult to manage the kids.

As more and more private boaters arrived they parked closer and closer to the rope line for the swimmers. We saw so many people almost get hit by boats, it made me nervous to even be there.

We left mid day and all felt satisfied. Sure, if we had the place to ourselves we probably would have stayed all day playing in the shallow water. As the circumstances changed though we decided to leave.

We mostly packed up and sort of waited in the water near where the boats leave. When we saw one of the co-op ferry boats come around the corner we hopped out and went over to the dock.

The boat ride back was more crowded. Lots more people coming and going mid-day but still a pleasant, comfortable ride.

The hours we had nearly alone in the Blue Lagoon still seems magical. We now live near crystal clear beaches and this still stands out as an incredibly picturesque place to bring the kids. Don’t miss the Blue Lagoon just because you have kids. Plan accordingly and have a lovely time playing in the lagoon together.