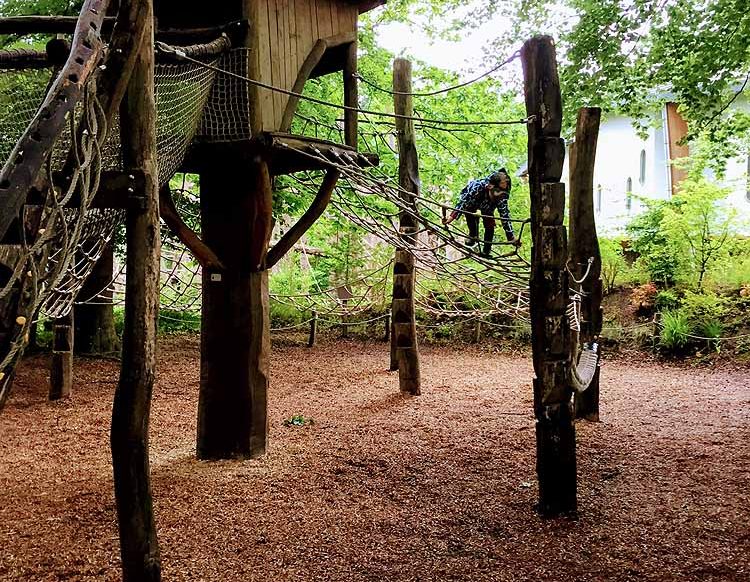 On a rainy Wednesday morning while my sister was visiting, I decided that when the kids got out of school (Wednesdays are half days) we would surprise them by driving to Apenheul in Apeldoorn. It had been on our Netherlands “to visit” list and today seemed like the day.

When you translate the Apenheul webpage to English, the first line reads, “A forest full of stray monkeys, that’s Apenheul!” This basically sums it up. Although Apenheul has other animals and some of the monkeys are in large outdoor enclosures, the vast majority are monkeys which are allowed to roam free through most of the zoo. I’m getting ahead of myself though. We parked in a large paid parking lot across from the Apenheul gates. I thought once we walked through these gates we would be there, particularly given that their was a photographer waiting on the other side. However, it is quite a walk (~8min) from the gate to the ticket counter. The walk is lovely and lined with trivia signs about animals. We purchased our tickets online the night before using an ANWB discount, with the kid’s packets were included in our ticket. These little fabric book bags included a hat, paper binoculars, an activity book map of the park, and a medal  that can be used to scratch off parts of the activity book. Completion of the book (or any attempt at it) is rewarded in the gift shop with a special pin. (My kids eat this sort of stuff up.)

Before you can enter the monkey area you have to make a stop and load everything you have into a “monkey proof bag.” These bags come in three sizes and are free for you to use. We took one of the larger ones and put everything inside before we crossed over the bridge into the “free roaming monkey” area. My sister and I sort of joked about the monkey proof bag. The lady at the entrance had warned us that, due to the rain, the animals might not be as active as usual. Then a little monkey jumped onto our stroller. I’m pretty sure he could smell the peanut butter sandwich my Middle Little had just finished before we entered the park. A crowd gathered as monkeys jumped onto the stroller. The Middle Little panicked a little bit. A helpful staff member shook some keys at the monkey and it hoped off the stroller. So, now would be a good time to acknowledge that although I knew the monkeys would be free range, I had no idea they would jump on us. These little guys at the beginning were the most curious about us, but plenty of other types approached us during our visit. The staff was always around and happy to answer questions. We needed quite a bit of help identifying which animal we were seeing to check it off in our activity book. In addition to the areas where the monkey’s are able to roam freely, there are plenty of open enclosures. In these areas, you are viewing the apes or monkeys on an island or other enclosure, but they are not able to reach you. In addition to primates, they also have a smattering of other animals from birds to goats to lemurs and coatis.

We were able to see plenty of animals out and moving around, despite being told it was a low activity day. There were whole areas we pushed through because of time constraints where we could have stayed longer. There were several areas we just skipped all together, not due to lack of interest, but based on giving the kids more playground time.

Apenheul also has feedings and presentations which we did not check out at all. Ok, so the animals are the main attraction, but what makes Apenheul a fun place to visit are all the other little things they have going on. At many of the exhibits are these displays with foot pumps that, when depressed, emit sounds from the animals you are viewing. The kids loved these. In several cases, the monkeys on exhibit would respond to the calls the box made, which the kids loved. When moving through the exhibits there are plenty of things for the kids to climb on, just like the monkeys. The paths were lined with rope bridges and fun balance beams that mimicked the pathways left for the animals. The interactive exhibits are scattered throughout the park and are top notch. The kids loved comparing themselves to the animals. My little monkeys tried to make all the different monkey faces. There were also interactive exhibits, like this one where the kids helped put out fires. Stick your head in the cutout photos are always a big hit with my kids. The Big Little in particular loves these! Apenheul also has these fun free photo booths scattered around. We used this particular one as a hideout from a bout of rain. The kids played on the ropes while we took funny photos. It was really the perfect rain spot. The two others we encountered were not as cute, but still fun. There are also a ton of amazing playgrounds. Some of them are hidden in trees. This particular one was the Big Little’s favorite, as you had to climb several rope bridges to get to the huge slide. There is a smaller slide and play area to the right that was more accessible to my Middle Little. This playground was another huge hit. The kids liked it because it looks just like what was in the monkey enclosures. My Middle Little managed to get up there, but then had to be rescued since he couldn’t lower himself down. There were so many rope bridges that the boys were just in heaven. Each playground looked like an amazing tree house. I was a bit jealous that I couldn’t join them! The park ends with another great playground and a jungle themed carousel. Just past the carousel there are tables so you can unpack and return your monkey bag. You’re then funneled through the gift shop and out of the park. You can pay for your parking in the gift shop and get the €8 all day Apenheul rate.

On your walk back to the parking lot you go the short way through the park, basically completing a circle around the lake. You will pass another great looking playground. My kids were exhausted and it had started raining again so we did not really check it out. There also appeared to be a restaurant in the park with lovely views of the lake.

Although we did a half day visit, you could certainly make this a full day adventure.