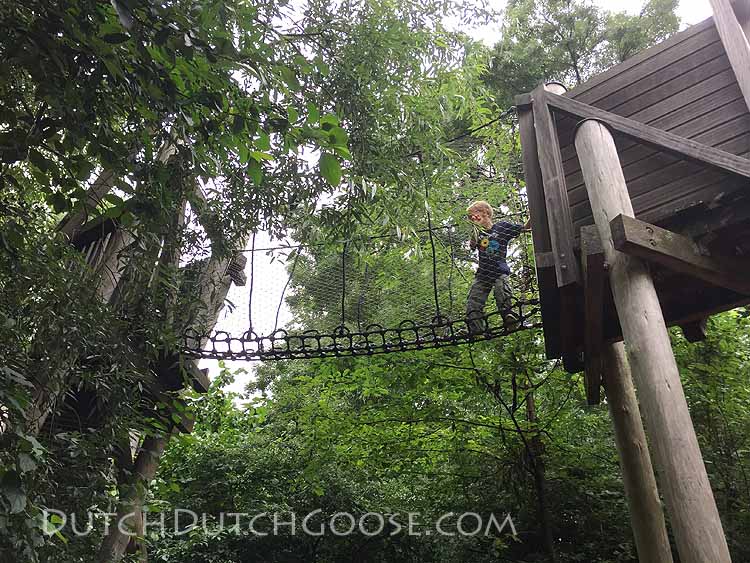 The Great Outdoors of Amsterdam – Vondelpark

One of the highlights of any Amsterdam trip with kids should be Vondelpark. This city park is large enough to explore for half a day. Combine that with a few things just outside the park’s border (like Rijksmuseum or the Van Gogh Museum) and you have a wonderful day in the heart of the city. We arrived at the park by train. We opted to stay outside of the city at the Droompark Spaarnwoude so we had more space and kid-friendly amenities. The pool, playground, kids club house and restaurant made the stay more kid-friendly. We took the train into the city, an easy 15-minute ride. We had a typically Dutch rainy day the day we explored Vondelpark. We’ve grown quite used to it, so we had umbrellas and raincoats and just dodged storms by taking shelter in cafes in the park. Vondelpark would be the perfect place to go with rented bicycles, but since we bike daily we explored the park on foot. Our first stop was this crazy playground near the Amstelveensweg park entrance. This playground is for the big kids, although there is a huge sand pit and a few other items for little ones. The main feature is this giant climbing structure and slide. The climbing portion is for good climbers. It is a series of ropes and nets that you have to climb up like a little monkey. The Big Little had no trouble and loved zooming down the big slide. The Middle Little was not even close to being able to make this climb. The big little scrambled up there a bunch though and loved looking down on us. Just next door to this playground is a little cafe, De Vondeltuin. This is a great place to seek refuge from the rain or grab a morning coffee. We meandered toward the center of the park until we ran into another amazing playground. This one is completely up in the trees. It’s mostly hidden from view. There is a walking path that runs under it for parents to be able to supervise the kids up top. The two big boys (5 & 3) had a blast on this playground. They could see the surrounding park and loved the netted obstacles between the tree forts. At one point we did have to ask them to come down when there was a bit of thunder, but the storm passed and back up into the trees they went. Just beyond this park we popped into the rose garden. There were still quite a few in bloom and plenty of big fuzzy bees buzzing around. The boys ran around like wild between the hexagonal patches of roses. They enjoyed some silly snuggles too while Jeff and I looked for our next playground. In the center of the park is a large playground. The playground is completely fenced in, although, being a Sunday morning workout groups were on every open patch of grass in the playground. This is quite common in the Netherlands – workout groups take over playgrounds and yield very little to children wanting to play. We ventured behind the standard playground equipment and into the woods. There are wooden forts and paths here for kids to play with. The big boys rearranged sticks to make a path to one of the forts.

There is a lovely little paddling pond in this area of the park as well. It was not warm enough for the boys to pop in during our visit, but on a hot day this would be the perfect place to play. There is even a lillypad stone path across the paddling pool.

There are public restrooms and a water fountain here as well. The Kinderkookkafe is just outside the park at the Kattenlaan entrance. At this cafe kids make their own meals. We’ve never been anywhere quite like this and found it well worth a visit and an extremely good value. Everything at the cafe is arranged at the kids’ level and with pictures. You pick up a tray and grab all the ingredients for what you want to make. We opted to make a whole bunch of things! We found a seat and set to work. They are of course all set up for kids so there are taller chairs for the kids and everything is extremely kid-friendly. Our Middle Little wanted to make a pizza. He had fun cutting all the vegetables and putting them on his pizza. Once you have it all ready you take it over to the kitchen and they put it in the oven for you. They bring it out to your table when everything is ready. The Middle Little was pretty excited about his pizza! The Big Little made some wrapped hotdogs and some kaas stengels (Dutch cheese sticks). His were both delicious and he was able to do the entire thing on his own! Coffee for adults is self serve as well. When you’re ready to leave you just tell the cashier what you had. It was raining during our visit but there is an outside play space with some bikes and a sandbox. There is a book corner inside too if you get bored waiting for your food. Our kids took to the small slide on the entrance stairs and did laps while waiting. It was super clever. Adults walk down the stairs to enter the cafe while kids use the slide. We explored the park a bit more before dodging the next rain storm at the Big Milk House. We ordered some actual food for the adults and let the little ones get ice cream. There were plenty of umbrellas pushed together so we stayed dry. The Big Mill House has a huge playground but I didn’t even venture over there though. The kids played happily while we ate and returned when they were ready for their treat! In good weather there is nearly always something going on in the park. We headed over to the amphitheater to catch a bit of the summer stage performance. The boys sat happily and listened to this singer until her set ended. Then we helped pack up the chairs and went on our way. You can find a schedule of performances online.

All in all it was a perfect half day out in Amsterdam with kids. We had thought about popping over to one of the museums, but instead found another small playground on our way out of the park. It was pretty wet though so we headed straight to the train, opting for the pool at the Droompark.