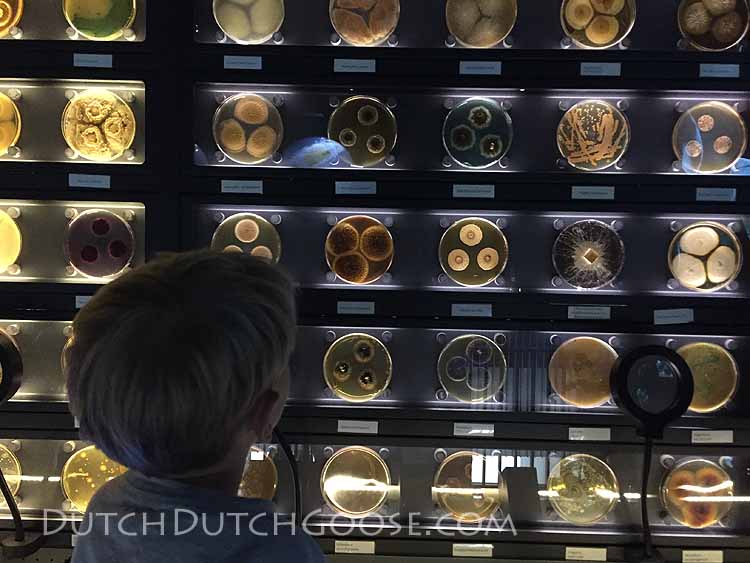 Over the summer we decided to do a small staycation in Amsterdam. We typically make the 45 min commute to do an event or activity and then head back to Delft. This time we decided to get a house for a few nights at a holiday park, Droompark Spaarnwoude, and spent four days enjoying Amsterdam’s outdoor attractions.

The Artis Zoo has been on our radar since we moved here, but since the Rotterdam Zoo is so close we always just head there. In summer, the Amsterdam Zoo has weekend evening concerts and events. We opted for an afternoon visit to the zoo and neighboring Micropia to take part in the evening festivities.

Parking was a bit of a mess. Due to bad weather we got lucky and found an open spot in the zoo’s paid parking lot. Had the weather been nice we likely would have been out of luck. We started our visit at Micropia. This ‘zoo for microbes’ is covered as part of the museumkaart program, or you can purchase a combo zoo-Microbia ticket. If you have a stroller with you, as we did, you will need assistance getting into the Microbia exhibits as you are loaded into a corral to take the elevator up into the exhibit space. Microbia is dark and relatively quiet. There are microscopes to peer into, videos to watch, and plenty of things in terrariums. I could have learned a lot here if left to explore without little ones. We picked out the stuff that moved a lot or was super gross to point out to the kids. Everyone gets a little packet that you stamp as you move through the exhibit. The kids loved looking for these stamps. At the end you get to see how many stamps you found using a big projection screen. The kids’ favorite part was watching the lady in the lab. If we had known this we would have timed our visit to a lab demonstration. Instead though they just watched a scientist go through her duties watching through the lab window. All in all this was a great introduction to microbes. We stayed about an hour. Jeff’s favorite part was near the end (ground floor) where the museum has put various foods into jars and listed their introduction dates. You get to see various stages of mold. When we were done at Microbia we simply walked out the door and into the zoo. The zoo is literally across the street. I purchased tickets in advance so we did not have to deal with the lines. The zoo is well laid out and the cooling effect of the rain meant that all the animals were out and about. The zoo has a bunch of babies. We watched this mama carry her baby across this rope back into their nesting boxes. There are several free roaming areas. (We experienced this at Apenhaul.) The little guys were just laying all around enjoying the patches of sun. The Africa area of the zoo is so lovely. I had a sleeping Little and was happy to walk this path that cuts through the exhibits and parallels the canal. There is, of course, an amazing playground colocated with one of the zoo’s great looking cafes. The boys had a great time playing here before we wrangled them so we could head over to the summer evening programs. The staff had spread giant bean bags all over the amphitheater lawn. We claimed a few for our family and relaxed a bit. The Big and Middle Littles ran over to join the yoga class when it started. The Big is fluent and had no trouble. The Middle Little however just sort of tried to copy his brother. I only stayed to watch a bit before returning to our bean bags where we could just see their little heads bopping around. The Little Little enjoyed some quality parenting time climbing around while the big boys worked on their yoga poses. I came back over during Shavassana to check on them. I found my two on top of each other in the middle of the pile. They got bracelets for participating, which they loved and wore for several weeks after this trip. As soon as yoga was over the next activity started. They rolled over a cart of edible garden stuff. The kids were all invited up to participate. My Dutch isn’t great but the Big and Middle Little kept bringing us stuff back from the cart. We ended up with a carrot, a potato and an onion. Meanwhile the kids tasted all sorts of herbs. While that was going on Jeff headed over to the food carts and picked up some food. The pizza was our favorite, you could even top it with some herbs from a little cart. After the presentation the kids were all invited over to plant their own little garden! (Good thing we had the stroller since we went home with tons of goodies!) We passed a poffertjes cart and had to stop… twice… because we just can’t get enough of these delicious little pancakes coated in butter and sugar. With bellies full we popped into the planetarium show.

I think we assumed it would be a kids show of some sorts, but it was a straight up guy explaining the night sky, planets and the universe in Dutch. I looked over and the Big Little had fallen asleep. We gathered our things and popped out of the theater. (Always sit by the exit at things like that when you have little ones! Especially if you don’t speak the language.)

It was pouring rain so we just decided to run for the car. We were soaked but happy when we got back to our cabin for the night. We all went straight to bed! We couldn’t have asked for a better summer evening as a family in Amsterdam!