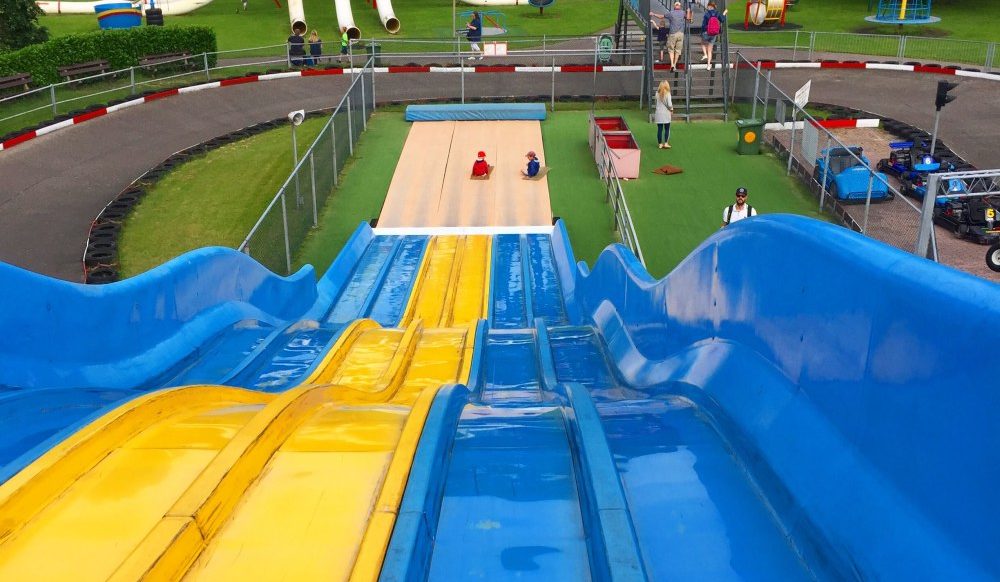 We drove from Delft, 40 minutes north to Linnaeushof. We arrived just a tad before opening and were able to grab some of the coveted free street parking (Sundays only). There is also a paid lot available (6 EUR). The park is well signed from both the street parking and paid parking. Our big error was not purchasing our tickets online. We had a bit of a wait to get in and we paid a one extra Euro per person compared to the online price.

The best way for me to show you Europe’s Largest Playground though is through pictures and videos. I’ve tried my best to explain what you will encounter here, but it truly is a unique experience. I was nervous that the park would get crowded on a sunny weekend. With 350 play structures though lines never built up. Plus, most attractions don’t require a line.

Hopping on the train is a great way to get a view of the entire park. It doesn’t move very quickly but you can see most of the park as it makes a circle (departs every 15 mins, from 11am). You can really see how much this place has to offer. The kids spent the whole ride discussing what we wanted to do next. Linnaeushof has been around for 50 years. It truly is a playground and not an amusement park. With only a handfull of exceptions the equipment is all self powered. Children are encouraged to play and explore. Our kids gravitated toward these large crawling pipes and kept coming back to them over and over. There are a huge variety of play structures. Some are more challenging (and dangerous) than others. The larger attractions all feel like a bit of a workout for parents and kids alike. We spent quite a bit of time in Toddler Land where we could let the Little Little play with a bit more freedom. Here a small city is set up and perfect for role play of all ages. The police station has pretend computers and even a jail cell with rubber bars. The Big and Middle Littles took to the bikes. You can bike around the whole city. There is a bike-through restaurant where some kids were taking orders, a gas station and plenty of intersections to explore. The fire station at the city was also a huge hit. Here you can climb through the station and slide down. The Little Little also loved driving the pretend fire truck. This section of the park got the most crowded as the day went on so we were glad to have played here first. There are benches all around the perimeter. The toddler area has some “light” versions of the play equipment found elsewhere in the park. This daddy-propelled carousel with bumper cars on it was fun for all three of our littles. I could hardly watch it go round and round though. The fun at the swings only came to an end because Jeff decided that twenty minutes of pushing was enough. Later in the day we realized how tame his ride had been after watching other parents really give their kids a wicked ride. Jeff took a break and made the big kids do the work on this pedal carousel. The Big and Middle Little peddled to make the carousel go round. The Little Little happily rocked back and forth under the power of his older brothers. The back part of the toddler section was made up of all sorts of fun slides. The boys had a go at each one like little ducks all in a row.

The rest of the park had much bigger challenges for the kids. I took fewer photos on this side of the park because I was constantly watching the kids, worried about their safety. This Dutch hands-off parenting can be hard for an American at heart. (I’m learning though!) This see-saw allowed you to run on it until it tilted the other way, bouncing everyone on the platform when it hit the ground. The Middle and Little thought this was hysterical! Meanwhile, the Big Little ventured over the large bridge to the playground on the island on his own. He used some of those talking tubes to call back to us as we played on a large pirate ship. The big little also took on a ninja warrior course that included a timer and everything. He needed no assistance and was quite proud of himself. The Middle Little loved these elevated pedal cards. This was the only attraction that legitimately had a line. We waited about five minutes for our car to come around. The seats in the car adjust so that both you and your little can pedal. It was slow going but gave us a great view of the park. This tower was another big hit. You have an assisted pulley to pull yourself up the tower. You can drop down and go back up again a few times. There was a never ending supply of things to jump on and climb on. The boys didn’t stop moving the whole time we were here. A bicycle propelled Ferris wheel. Sure. Why not.

There were a few things with age restrictions like the sky chairs. The Big Little was a bit nervous to ride but eventually rode it over and over.

There is a cafe at Linnaeushof, but it serves standard hamburgers and fries. We packed a lunch and supplemented with some french fries. This is also what we saw most other Dutch people doing. There are several places to fill up your water bottle out in the open, so bring a bottle or two to stay hydrated.

Linnaeushof also has a water playground that is open on warm days. It was warm enough the day we visited, but the wind picked up and we decided not to chance it. The water playground was full of waterslides and fun splash park type attractions.

There is also an Indoor Playground with a few attractions like bumper cars that we didn’t try out. The boys were so interested in running and climbing on everything we bypassed the indoor area altogether. Most everything is included but there is an extra charge for the go-carts and mini golf.

Visiting Linnaeushof is a very European experience and a good addition to any itinerary with kids. There are similar parks around though if you can’t fit this one into your plan. Look into Plaswijckpark or Efteling for other quintessential Dutch experiences in other parts of the country.