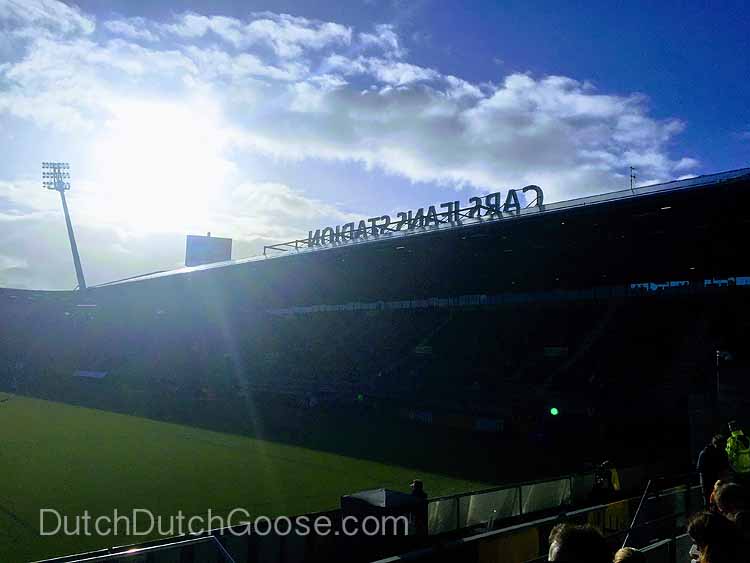 Soccer in the Netherlands – a Kickin’ Good Time

The Dutch take their voetbal (soccer) quite seriously so it took a couple of years before we felt it was a good idea to take our oldest to a soccer match. There is a small history of violence at some soccer matches in the Netherlands due to hooligans in the stands, but we felt perfectly safe. Our local team in The Hague is called Alles Door Oefening Den Haag, which is commonly abbreviated as ADO Den Haag. The stadium is quite close to our house so on a blustery November afternoon, we took H to see his first match. There’s an other-worldly feeling to showing up at a professional sports venue on bicycle, having cycled just 15 minutes from our house. It felt more intimate having avoided traffic and paying to park. ADO’s competition on this Sunday afternoon was Heracles, a team hailing from Almelo, nearly 200 kilometers to the east of Den Haag. Almelo is a rather rural area of the Netherlands close to the German border so we have not yet visited that area. ADO players hail from the Netherlands and beyond – it’s a true multinational squad. Dressed in their characteristic green and yellow vertical stripes, the ADO players started the match on the defensive. Heracles put on quite a show during the first half. It wasn’t until the second half that ADO kicked it up, driving home a 4-1 win. With such a high-scoring contest it was fun to feel like we were part of the action. The ADO stadium is not huge so we could see everything on the field. Of course our five-year-old was ecstatic. The whole experience was positive for him. ADO Den Haag sells “family section” tickets which are above one of the goals. This section was chock-a-block with families. The stadium provided loaner green and yellow flags for the kids to waive, making every moment of the game more exciting. I never felt like our kid was in the way since there were kids all over our section. My fears about hooligans and violence at the game were quelled when I recognized all of the systematic elements of security. The stadium is sectioned off using transparent, plastic walls. These strong walls keep spectators from crossing into other sections – or to keep a fight from spreading. Every spectator enters through their specified gate, meaning that you can’t wander around the stadium. Each section has its own toilets and concessions. Further, the hooligans were in their own protective plastic box – a whole section of rowdiness sequestered in the corner. They were loud. I mean, really loud. To prevent spectators from entering the field, there is a dry moat between the grandstands and the field. If you were an Olympian with a running head-start, you might be able to jump the gap, but it’s enough of a deterrent. I heard a rumor that there used to be barbed wire between the stands and the field, back in the day. Taking our oldest kid to a European soccer match turned out to be a great idea. We play soccer with him at our neighborhood soccer field but having him see the real deal helped him understand why his parents are always so excited about the sport. Bicycle parking was free. The match lasted on the short side of two hours, so it was the perfect length for a youngster. Best of all, our boy loved the snacks at the stadium (think typical Dutch treats). For sure we’ll try to catch other European soccer matches. It was a great family activity – safe, affordable and with just the right dose of excitement.