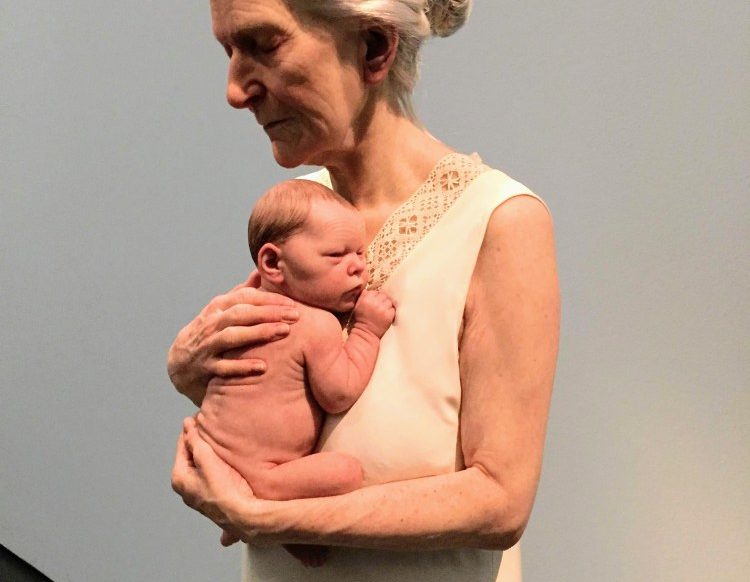 The Kunsthal Museum in Rotterdam

The Kunsthal Museum in Rotterdam sits on the museumpark and has rotating exhibits of modern art. A neighbor told us that we should not miss the current exhibition of hyper realism so we made plans to head to Rotterdam one morning while the kids were in school. We have been extremely lucky to have a neighborhood school that embraces the Montessori and Charlotte Mason principles of teaching. I’ve been able to have the Big and Middle Little in school, freeing me up to do some museum going with the Little Little. Rotterdam is close enough that I can head there after school drop off and be home in time for lunch pickup. I drove to Rotterdam and parked in the museumpark underground parking lot (around 2.75 EUR per hour). Just make sure you park near the stairs that head up to the museum park or you’ll end up on the ‘other side of town’ near the hospital. Kunsthal opens at 10am on weekdays and is part of the Museumkaart program. I arrived a bit early and walked a few blocks to Koekela, a cute little cafe known for their cookies and coffee. Instead of cookies we ended up partaking in their savory scones and clotted cream. You do have to store your stroller on the main floor due to fire code, while most of the seating is upstairs. They have high chairs available and a small kids play table that the Little Little enjoyed. Koekela was a great way to start our museum morning. I popped in next door to Jordy’s Bakery to pick up some bread for dinner. Jordy’s has an amazing selection and you can even watch the bakers hard at work downstairs. Then we headed over to Kunsthal, arriving just a bit after opening. The Kunsthal Museum itself is a work of modern art, and thus hard to navigate once you are inside. We accessed the hyperrealism exhibit by passing through a full auditorium. It’s best to ask for directions if you’re trying to access a particular exhibit. We found ourselves lost quite a few times during our visit. Hyperrealism captures the human form in ways that blur the lines between reality and sculpture. The Kunsthal exhibit is made up of a variety of sculptures by different artists pushing the boundaries of  hyperrealism. Upon entering the exhibit you encounter this woman looking through the wall. At first glance you wonder if you should get in line to peer through the wall as well, until you realize she isn’t real. She is part of the exhibit. Other pieces of art in the exhibit capture perfectly the human experience. This old woman holding a newborn was one of my favorite pieces in the exhibit. It is so meticulously crafted that you expect the baby to cry out at any moment. I was in awe at the folds of the baby’s skin created by the pressure of the old woman’s hands. Other hyperrealism artists play with the scale of the human figure. A giant baby girl dominates one of the rooms (She’s 5 meters long!). As you walk around her you see all the tell tale signs of a newborn, as if you have just witnessed the birth of this giant baby. The baby’s feet are just a little puckered from nine months in amniotic fluid and blood still rests on the baby’s skin. The Little Little chatted away to this giant emerging from the floor. He was lifelike enough that I wonder if the Little Little even knew he wasn’t real. The only clue for most would have been the scale. A large part of the exhibit covers nudes. The human form has always been the subject of exploration by artists. Hyperrealism confronts the beauty and disgust we have with our own bodies. It is fascinating to look at these figures, but that also brings feelings of awkwardness. You feel as if you are staring at a real person.

One series of nudes contains a sign asking for no photos to protect the model. This led to a lengthy discussion over dinner with the friend who suggested we see visit Kunsthal. Is this sign part of the installation designed to make us think about the reality of the art. Why would a model who sat for these intimate sculptures not want photos circulating? Is seeing the sculpture in a gallery fundamentally different than having it displayed on social media. Some hyper realists have adapted the medium with a pop culture feel. The human figure replaces everyday objects or is slightly altered to fit a particular scene. I was particularly moved by this whole exhibition and the way it makes you feel about the human body. It is an amazing way to confront the reality of the home we’ve been given and its beauty. I honestly thought we would be on our way after the hyperrealism exhibition, but a few dresses visible through the window near the exit caught my eye. I inquired and found out there was also a display of Dutch haute couture designers Viktor & Rolf on display. I’m not a huge fan of runway shows, but seeing the pieces in an art gallery is an entirely different experience. I know people argue that at a runway show you can see the clothing move. I though much prefer to be able to study the design and really take the incredible details in. I think this is particularly true of haute couture which pushes the bounds of current clothing design. The Kunsthal exhibit features some of Viktor & Rolf’s most famous pieces. It also features antique dolls dressed in replicas of these pieces. The complete Russian Nesting Doll collection from their 1999 runway show is on display. A model was dressed in each of these layers on top of each other. There is a video of the show, but you barely have time to look at each piece. The exhibit features them all in a line from base layer to top coat. The forms all rotate so you can take in the incredible detail of each piece. I tend to be quite practical. I look at clothing and think about its ability to perform as a protective layer and complement the human form. You can’t imagine anyone outside of Hollywood wearing any of these pieces. However, when viewed as wearable works of art I started to really appreciate the human form as the canvas. (Perhaps this revelation came as a result of having just spent an hour looking at human bodies in the hyperrealism exhibit.) My favorite piece in the whole collection though was the wedding dress designed for Dutch Princess Mabel (Mabel is the sister of the current King). She wanted a three dimensional train and they delivered. The Kunsthal Lab (kids area) has been transformed into an atelier. Children are encouraged to try their hand at designing dresses of their own using the provided materials. There are some staff members on hand to help you out. Children between 6-12 can pick up a “look and do” guide at the entrance to the museum. This guide has activities for them to complete in each of the museum’s current exhibitions.

The Kunsthal Rotterdam has rotating exhibitions so these two won’t be there forever. Check online to see what is on before heading there. If you’re local I really recommend going to check these two exhibitions out before they are gone.

We get asked a lot how we get the kids to behave in museums. The simple answer is we take them a lot and they don’t always behave, but it gets a little easier each time. The Little Little screamed a few times at Kunsthal, but I pointed out colors, found pieces of art he liked and even just carried him around for a bit. (If you’re alone just ditch your stroller in the corner of the exhibit and pick it up at the end or ask a staff member to help you.) When he had clearly had enough I left. The more you take them to the better. For more ideas about taking your littles to museums you can read about my trip to the Amsterdam Museumplein with the Little Little.