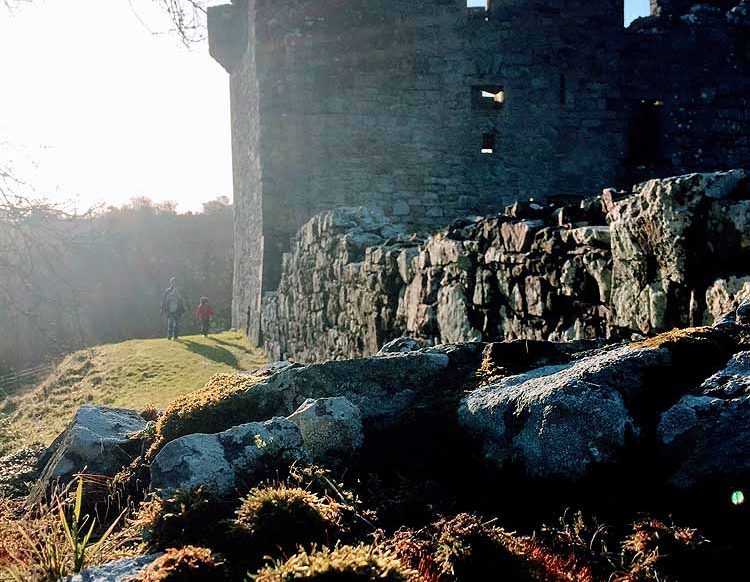 We ended up in Enniskillen at the end of our Northern Ireland trip because we were staying at the Manor House Country Hotel for a bit of a rest at the end of the trip. We had been on the go for most of the winter holidays and wanted to take it easy before we returned to work and school schedules. Although we spent quite a bit of time at the hotel we still wanted to see a few things in and around Enniskillen. The Manor House Country Hotel was a wonderful jumping off point for exploring the area. They also run a 90-minute cruise on Loch Erne that wasn’t running during our visit but looked like a great outing.

We spent our time exploring old castle ruins dotted around the loch. This is one of our favorite activities. The boys love to run around castle ruins and pretend they are knights. We love seeing these stunning buildings. We had most of these places to ourselves during the visit. As always during these castle explorations we were glad to have the Middle and Little in the carrier for the hike inside the castle. We let them out to run safely in the fields. We explored Tully Castle first (free). This fortified manor house was attacked and burnt to the ground on Christmas Eve of 1641. You can explore the exterior of the castle. It sits up on a hill looking over the wooded countryside. The visitors center, closed during our visit, is located in the farm house in the field below. We followed the trails down to the house and had a look around. In the summer months when the visitors center is open you can learn about the legends surrounding the castle. Next we stopped at Monea Castle, built in 1618. Monea Castle is more what we’ve come to expect from ruins. We were able to explore the interior and climb through the building. It is free to visit and open year-round by passing through a cattle guard. The castle was abandoned sometime in the 18th century. It stood at the corner of a walled area. The wall has mostly disappeared but the castle remains. I love how the moss overtakes these ruins. I think it creates such a magical quality. You can peek up to the sky through several places in the castle. The Middle Little wanted to stay snug in the carrier. I think he was a bit cold! The Big Little though has an adventurous spirit and wanted to see the view from every window he could reach. We found quite a few for him to enjoy. This one was close enough to the ground we helped him exit the castle through the window. The perfect escape route. We ventured on a small path that took us around the outside of the wall thinking maybe we could follow the path for a bit through the pastures. Instead we found ourselves right back in the castle grounds. We headed into Enniskillen proper to grab some lunch and see the town. We stopped to enjoy a final castle – Enniskillen Castle. It now houses several history museums. It was originally built to defend the town and sits right on the water’s edge. Just behind the castle, across a large parking lot is a huge playground. I’m talking HUGE. We made a stop here to let the kids run around. Despite the large slide complex the kids spent most of their time crawling on the “spider web.”

We popped into town for some lunch. There looked to be quite a few options but we went with the safe bet of Little Wing Pizza. They have a great lunch deal of a pizza and salad. We ordered three, but should have ordered four because they were quite small and our guys were quite hungry.

If you have more time there is plenty more to explore in Enniskillen. The Sheelin Lace Shop and Museum looked like something I would have enjoyed, but we had a tea reservation back at the hotel. There is also a barber shop & railway museum advertised, but I had a hard time finding more information. It looked small and quite an odd combination.

In warmer months there are also plenty of activities related to the Loch and many more castles to explore. We were happy with our brief stop here but encourage you to spend more time exploring.