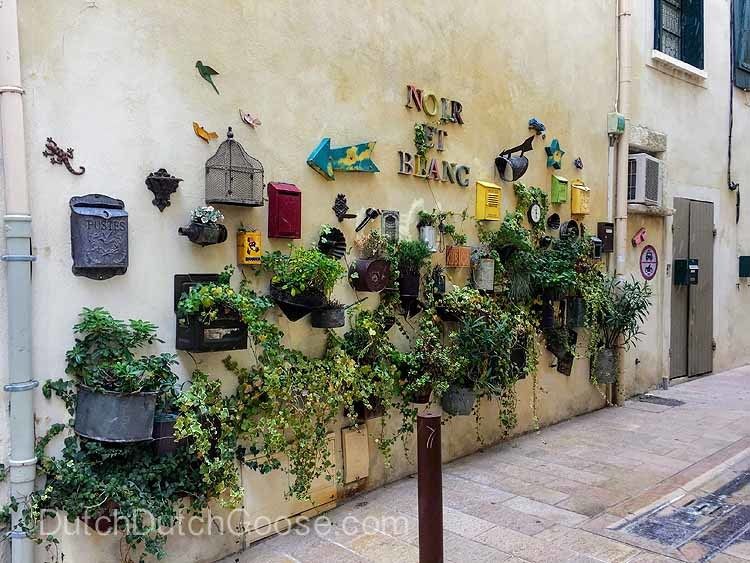 With a little but of sunshine warming the otherwise cold day we headed into nearby Saint Rémy to check out what it had to offer. In our experience you can’t go wrong popping into Provence’s small towns and exploring by foot. We headed into Saint Rémy with some French friends who grew up in the area. They were our local guides for the day. We took some street parking on the outskirts of the city center. You pay at a kiosk estimating the time you need for parking. Then you wind your way through the adorable side streets. The kids were so excited to be reunited with their friends. They ran down the streets in a pack speaking in a mix of French, English and Dutch. It’s always nice to see how easily they slip back into old friendships. We wandered a bit through the streets and finally popped out at the market. The cold and the rain made the market mostly disappointing. We’ve become accustomed to rather robust markets in our hometown, so the small Saint Rémy market didn’t impress. (Here is info on St. Rémy’s markets, which are typically more exciting.) Since the rain was holding off we decided to follow the Saint Rémy Vincent Van Gogh Path through town. Little markers in the ground lead you to sign boards featuring his paintings. Vincent Van Gogh spent a year at a facility in Saint Rémy and made many of his famous paintings here. He would wander the city painting its trees and pathways. The Saint Rémy walk is less well laid out than the one in Arles. The sign boards feature passages from Van Gogh in French but do not explain where the picture was painted or other context. They all face the same direction on the path so it was hard to see exactly what still existed today from the painting. Nonetheless it is a pleasant walk and you get to see some of Van Gogh’s most famous paintings. We followed the Vincent Van Gogh walk out of Saint Rémy and into Glanum. You reach the Triumphal Arch and Mausoleum first. These are free to visit. They were built outside the northern gate of the city. They are extremely well preserved. We somehow didn’t get the entire arch in a photo, but here we are standing under it with the gaggle of children. The neighboring Mausoleum of the Juli was built around 40 BCE and is one of the best preserved in all of Europe. A bit farther up the road you reach the archaeological sight of Glanum. This area requires a paid entrance fee. It is one of the best preserved laid out Roman cities we have had the pleasure of visiting. Enough of each building foundation is left that you can see the city’s layout and understand why everything was built where it was. You can even see how they brought in fresh water and how they attempted to get rid of wastewater. A short hike up the hill (500m) gives you a perfect perspective of the city’s layout. They are really strict about the kids not climbing on anything so you’ll need to keep a close watch on the kids. One of my favorite ruins was this villa. The two or three story building would have used the roof line to collect water and drop it into a basin in the center of the house. Some of the buildings are so well preserved that mosaic tiles still exist in their original location. We had the stroller with us for the walk, but abandoned it at the visitors center. The stairs and gravel paths made it nearly impossible to use it. We were enjoying our visit until all of a sudden our French friends realized it was almost one o’clock. You see in Provence everything closes between one and three for lunch. We literally ran back down the road into town. We were hoping to find anything open where we could pick up lunch. However, when we arrived back in Saint Rémy we found the market packed up and the stores all closed. Only one bakery was open. They were nearly sold out of everything. We bought their last loaves of bread, a few pastries and opted to make the short drive home to have lunch. Stores being open for lunch would continue to be a problem for us, so it’s best to keep your eye on the clock and eat early!

Saint Rémy has much more to offer that we did not explore. There are many small museums to see. We spent the rest of our afternoon playing at the Airbnb, eating bread and cheese and enjoying each other’s company.