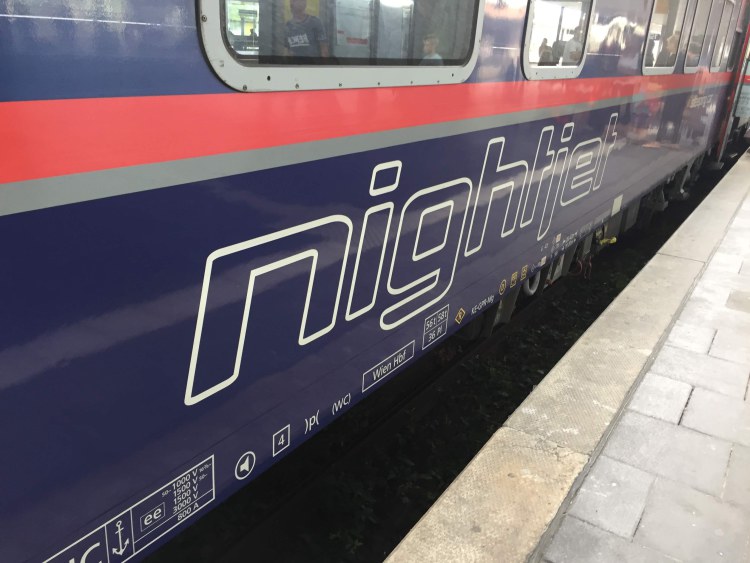 Everything you need to know about taking the overnight nightjet train with your car.

When I heard about an overnight nightjet train for you and your car from Innsbruck, Austria to Dusseldorf, Germany I couldn’t wait to plan a trip. Although we had previously taken a city trip to Vienna the mountains of Austria were calling us. Nightjet train service gave us the convenience and flexibility of having our own car and car seats without the pressure of the twelve-hour drive home from Austria.

We structured our trip to drive from Delft to Innsbruck, driving just a few hours each day.  The road trip made lots of stops for fun, off-the-beaten-path attractions. We saw a few friends along the way too. Instead of a drive looming at the end of our trip we had an overnight train to deliver us a few hours from home.

The NightJet train service between Innsbruck and Dusseldorf departs in the evening. This gave us a full day in the city before we needed to be at the train station. We had two tickets, one for our car and one for our family. We popped into the OBB (Austrian Rail Company) office at the train station to ask all our questions, although it all turned out to be rather self explanatory. Austria is a very organized country.

Jeff dropped the littles and I off at the front of the Innsbruck station. Then he followed the blue signs featuring a rail car with a car on it’s top to the nightjet train car drop location. Workers there directed him to drive the car directly onto the rail car. It’s an extremely tight fit (even for our Civic) so they suggest just the driver goes to drop the car. An underground walkway joins the car drop area to the main station with a two-minute walk.

There is an hour gap between the car drop time and the the train boarding time. A shunter moved the vehicle transport rail cars to the front of our track and thirty minutes before the departure time the sleeping cars were at the platform.

There are three types of seats on the Nightjet train. There are regular seats, couchettes and sleeper cars. We booked a family couchette car. We had the entire car to ourselves. It consisted of six flip-down bunks. Bathrooms and a sink are located down the hall. There are no showers in the couchette cars. In the couchette rooms you are given sheets, blankets and a pillow but you’ll need to make your own bed.

The water onboard is not potable. In the sink room you will find bottled water to brush your teeth with. We also asked for a few extra bottles for the room to keep everyone hydrated.

Two 230 volt electrical outlets are available in the room. They are under the table near the window. We had a bit of trouble finding them in the dark. There is no Wifi in the train, but we did have Wifi in all the Austrian stations.

We also poked our heads into a sleeper car. There are only two beds in a sleeper car but your washbasin is inside the room. Your beds are already made and have mattresses, as opposed to the futon you get in the couchette car.  There are bathrooms and showers down the hall. We couldn’t get the showers to work though.

It was so late by the time we left Innsbruck we easily got the kids to sleep. I brought a portable crib to use with the Little Little, but ended up just letting him sleep on the bottom bunk. He did just fine there and slept through the night.

The only big issue was the heat. Temperatures during the day hit the 90’s and we poured sweat as we tried to get everyone settled for the night. The train A/C just couldn’t get the car cool. The window doesn’t open much either. The car did eventually cool down a bit, but we were warm for most of the journey.

Despite the heat everyone slept pretty well. The Big & Little were up around 6am so we used the blankets to build a tent around the Middle’s bed so he could keep sleeping. Jeff went down the hall to ask the steward for breakfast. She brought our breakfast (included) right to our room.

The included breakfast in the couchette car was two  bread rolls, butter and jam. OBB calls it a Viennese Breakfast. I had a coffee with mine, Jeff had a tea and the boys each got a chocolate milk. It was more than sufficient. The sleeper car breakfasts included cheese and ham.

We enjoyed the last hour of our train ride looking outside the window and watching Germany roll by. The boys did a bit of school work and before we knew it, we were in Dusseldorf just a few hours from home.

Retrieving the car in Dusseldorf was easy, but lengthy. Expect it to take nearly an hour. The train stays in the station until its evening return trip, so there is no rush to depart the train. (We even left a bag on the train, under the bed. Jeff was able to get our car attendant to let us back into our room to retrieve it an hour after arriving.) The car attendants are also the employees who clean the rail cars and prep them for the next journey. They even help with vehicle loading/unloading, so it was fun to chat and hear all about the job.

Once you depart the train in Dusseldorf, follow the sigs with the car on the train carrier. It takes you under the tracks to an empty parking lot. You will wait here until they are ready to unload all the cars. Then you proceed to your car and drive it the length of the car carriers and down a ramp. Only the driver is allowed to go on the train to retrieve the car. We waited in the parking lot and loaded our bags into the car there.

There was enough time for the Big and I to venture into Dusseldorf station to pick up some coffee and pastries. This helped pass our waiting time.

While we do wish that the train sleepers were more modern (like the ones we had in Norway on the Santa Express) the overnight train is comfortable enough. The NightJet is an excellent and efficient way to cover some mileage while you sleep.