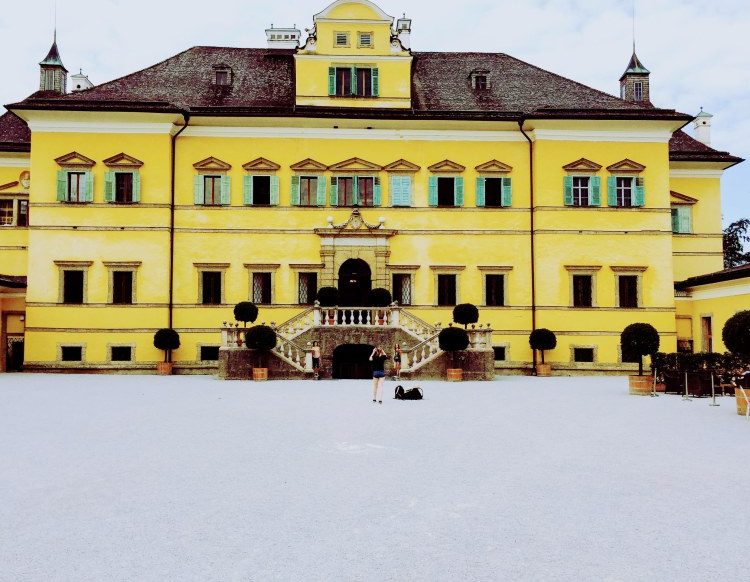 As palaces go, Schloss Hellbrunn in Salzburg packs an unexpected punch in terms of attractions. Visiting Schloss Hellbrunn can easily eat up a day of your Salzburg itinerary. We enjoyed strolling the grounds, visiting the castle museum, taking the hidden fountain tour, playing on the phenomenal playground and taking photos in front of the Sound of Music Gazebo. See! I told you Schloss Hellbrunn has it all.

Hands down one of the best tours we have been on with the kiddos! The tours run April through October. It’s best to make an advanced reservation as the fountains are extremely popular and only viewable on a guided tour.

The tour takes you through the gardens of Markus Sittikus, the prince-archbishop of Salzburg. He had the gardens designed to amaze his visitors and also make them soaking wet for entertainment.

He would invite his guests to tour the gardens with him, while his servants waited near the control pipes. At his signal he would soak all the guests, much to his amusement. At this table you’ll notice that the head seat remains dry.

As we toured the grottos and gardens the tour guide sprang the fountains to life, often soaking our whole group.

The boys of course thought this was brilliant! On a hot summer day this is really the perfect tour. The rest of our tour group was less than pleased, which only seemed to make the tour guide want to soak them more. Why go on a trick fountains tour if you don’t want to be tricked?

The boys became quite good at finding some of the hidden nozzles before they even went off.

In some of the grottos the water is on display running robots, raising golden cones and imitating bird sounds.

An entire miniature theater is run by a paddle wheel.

Always be on your toes because the water literally comes from everywhere. Here the stag sculptures drenched us all!

The tours are crowded and the grottos are small so make sure to push your littles up front to get a great view.

The gardens of Schloss Hellbrunn are lovely and manicured. You are free to roam them without a ticket. We saw plenty of people spending the day and bringing a picnic.

We of course spent most of our garden time at the large playground. This playground has it all. There were plenty of challenging climbing structures as well as smaller structures for the kids to enjoy. It was crowded with both tourists and locals enjoying the shade of the trees.

Admission to the palace is included with the trick fountain tickets so we popped inside, but didn’t stay for long. Audio tours are included, but we opted to not get them.

The pleasure palace theme continues inside the house. The room full of oddities was the boys’ favorite. Here, things were made to look like real mythical creatures.

The archbishop never spent the night here, it was used just to entertain, so there are no bedrooms. Just a series of large entertainment rooms.

One of the main reasons for visiting Schloss Hellbrunn, for me, was to see the gazebo from The Sound of Music. It was moved here to accommodate more visitors. You can no longer enter the gazebo, but it is still just as fun to run around and pretend you are 16 going on 17.

No ticket is required to visit the gazebo and gardens.

If you are heading to Salzburg I highly recommend you add Schloss Hellbrunn to your itinerary.