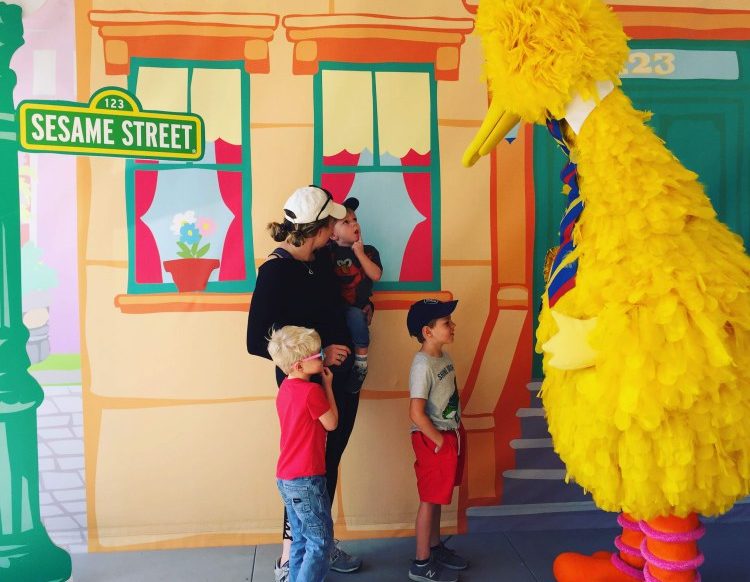 The single biggest question we’ve been asked since coming back from spring break in Tampa is if visiting Busch Gardens Tampa Bay with kids was worth it.

As a military family our tickets to Busch Gardens were free. (You get one set of tickets each year from the Sea World park collection throughthis link.) We were in Tampa so that was a good use of our free ticket.

We didn’t feel that Busch Gardens had a ton to offer our kids. (We much preferred the Tampa Children’s Museum.) That being said, we enjoyed our time at the park.

Here are a few things to help you plan your trip:

When you come into the park and pay for parking $25) let them know that you have a stroller with you. There is an entire lot, right out front, designated for stroller parking. The other lots all require a trolley ride, which is hard with a stroller.

The parking attendant will give you a slip for your car and then you will follow one of the painted lines on the road. The lines are not super clear, so we just asked each time cars were choosing a way to go and were directed to the appropriate lot.

We were at the park with a 6, 4, 2 and 1 year old. The animals were probably the best part. There are a variety of planned and unplanned interactions that happen with the animals throughout the day. The kids enjoyed catching quite a few feedings and interactions.

The bird aviary is one of the highlights to get up close with the animals. You can pay for nectar to attract the birds to land on you. We opted to just walk through and get a close-up look of these brightly colored birds.

Busch Gardens does an excellent job of making sure you get a great view of the animals. The kids loved the unique views and interactions they were able to witness during our visit.

We timed a few of the demonstrations just right. We watched the cheetah run at top speed! The big little can’t stop talking about it. You’ll want to pick up a flyer at the front with all the demonstration times on it to make the most of these experiences.

We just got lucky a few times too. We were walking by the lions and the keepers were tossing them meatballs. The staff member told us the large predators are fed randomly so that they don’t develop an eating schedule.

The elephant demonstration was well attended and hard to miss as keepers threw whole bails of hay and new toys to the elephants.

The Train and the Sky Ride take you through the large African Safari exhibit providing views you won’t want to miss. The big problem is that neither of these rides allow you to take the stroller with you, even if it folds.

Our plan was to catch the sky ride right when we arrived so we could ride it round trip without having to wait in a line. Unfortunately the sky ride wasn’t opening till noon. Instead the boys and I hopped on the first train of the day and rode it to the back of the park. Jeff took the stroller and walked to the station to meet us.

The train goes right through the Savannah giving you an up close view of the animals. You’ll want to hold on to your little ones though as there are no doors on the train and the animals are not at all frightened! The train waits at each station for a little bit of time. To see the full savannah you will need to take the train round trip.

Jeff and the boys took the sky ride back later in the afternoon while I walked back. They were able to see many of the animals from up above. The sky ride and the train were some of the highlights of the boys’ visit.

Many of the rides at Busch Gardens are large rollercoasters. When looking for things for the little ones to do your best bet is Sesame Place, a children’s themed area toward the back of the park.

We also attended the Sesame Street Show. The kids really enjoyed it. I thought a few of the costumes needed a refresh and the characters approached the kids A LOT. They liked it though and it was a nice way to get everyone to sit down in the shade.

You’ll want to arrive early though as the show does fill up fast!

We also took advantage of the rides available for the little kids. Only a few of the rides let you ride with your kid, so real little ones may have some trouble if they won’t sit alone. The Big and Middle though loved all the rides…except the Grover roller coaster. They rode it but said it went too fast around the corners.

There is also a huge playground in this area that Jeff and the big boys explored while the Little Little rested in the carrier. He just got overwhelmed with everything, so putting him in the carrier was a good way to let him calm down a bit.

There are a variety of little play areas scattered throughout the park. We found plenty of places to let the little ones play. We walked past some of the larger play areas too because we were short on time.

It’s not well advertised but you still get to do a free beer tasting. You head into the Safari Restaurant (large white building across from the sky ride) and you can grab two small sample beers. It’s not much but it was a nice little free treat. Jeff and I remember doing this a decade ago on our last visit to the park.

Three out of four kids agree it was a fun visit. Ha! It was like going to a large zoo that also had a bunch of rides. It’s great value on a Military Ticket! There were plenty more shows and demonstrations we could have attended but attempted to leave before we had total meltdowns. Of course if you love big rollercoasters then Busch Gardens has even more to offer. If we were paying full price you might be better served just going to the much beloved Tampa Zoo.