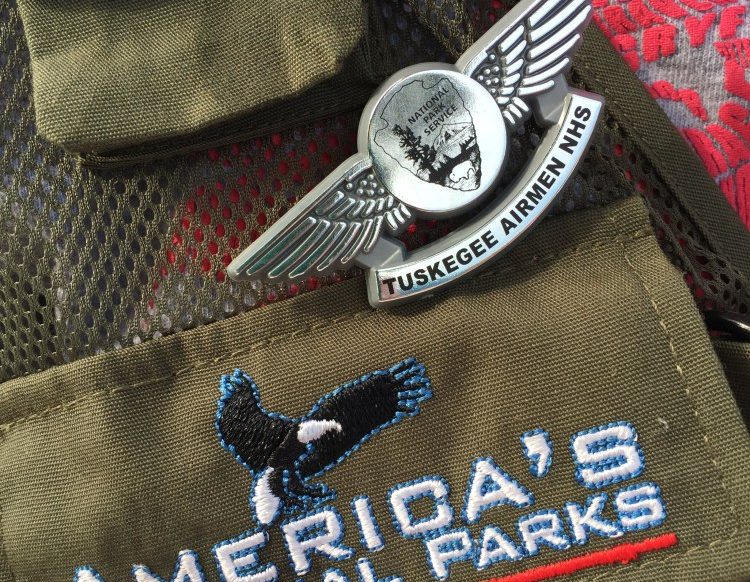 On the dull drive between Montgomery and Atlanta the Tuskegee Airmen National Historic Site stands out as a well curated, family friendly, free stop. You could easily spend several hours here reading all the displays or just pop by for a rest on your drive along I-85. Either way you are sure to learn something new and be glad to break up the highway monotony.

The Tuskegee Airmen National Historic Site is easy enough to find – follow the brown signs just one mile off the highway to Moton Field and surrounding buildings. They have two old hangars, a control tower and several other outlying buildings that have been restored as part of the historic site.

The Tuskegee Airmen were a group of African-American pilots who trained and fought during World War II to see if black Americans could be productive as members of the Army Air Force. They formed an entirely African American unit based at Moton Field. This group would be given the least desirable flying missions and excel. The museum recounts the challenges faced by a marginalized group who fought for the country that was oppressing them. Further, it celebrates the amazing achievements of the airmen and doors opened for African Americans as a result.

The Tuskegee Airmen National Historic Site presents such a compelling story (complete with airplanes) for children. The perfect jumping off point for conversations about race in the United States and our country’s complicated racial history.

As you enter the first building check in with the ranger and ask for your free Junior Ranger activity booklet. We got one for all three boys to share. The booklet is broken up by age for the activities, but the Big Little just did as many as he could do, with his little brothers helping of course.

At the end of your visit, if you have completed the packet, you can become an honorary Tuskegee Airman. Each child received a patch as well as National Park wings.

There is a 30 min orientation film that will set up your visit to Moton Field. The museum exhibitions tell about life on Moton Field. The little kids were not particularly interested in the film when there is so much fun stuff to do in the museum.

The main museum building is full of exhibition boards, touch video screens and hands-on exhibits. The large airplane hanging from the ceiling is also a huge draw. There are so many interesting deep dives into the airmens’ lives, specific acts of racist policy and battles won that you could spend several hours reading.

With kids however there are a few easy to focus on areas. The back left, near the entrance to the tower, has a hands-on exhibition of the signaling used at the time for the aircraft. The boys took turns signaling to the aircraft when it was safe to land and when they needed to fly around. Jeff called this “light gun signals” and said it’s still how pilots get a clearance to land if their radios fail. In this same area is a complete trunk from a Tuskegee Airman used during training. The boys loved looking at all the required items.

The large aircraft suspended from the ceiling calls to the kids. Flight paths are painted underneath and our littles loved running on these. Then off to the right, opposite the bookstore, are boards highlighting African Americans in present day who benefited from the doors opened by the Tuskegee Airmen. A space suit and cool sneakers drew the kids in. Modern stories of space exploration kept them in awe.

While you are in this area of the building pop into the bookstore. Here in the back corner you will find the National Parks Cancellation Stamp. You don’t have to have a National Parks Passport Book to get stamps – it is available for anyone to use. These books are some of our favorite activities though.

The littles all have the Jr. Ranger passport books (a gift from grandma for Christmas). These can be purchased at any National Park Bookstore or through the e-parks webpage. Jeff and I share a classic National Park Passport book which we have used since we were engaged. There is also a free companion app.

At the back end of building one you can head up into the control tower. It is important to keep kids with you here as the railings are small and there is a platform with a hole that goes all the way to the ground. As you climb the tower peer into the windows to see the parachute drying area. The tower also provides sweeping views over the airfield.

Upon exiting the tower we headed outside to walk over to the other hangar building. As you walk between the two hangers there is an amazing echo. The boys loved hearing their voices reverberate between the two metal hangar doors. No one else was around so we experimented with moving between the hangers and listening to the echo.

More hands-on fun and airplanes await you in the second hangar. The rooms here have audio tours that click on when you walk in and walk you through a day in the life of a Tuskegee Airman.

A small wooden aircraft body simulates a trainer. The boys had fun climbing in and out and pretending to fly.

This section of the museum is beautifully decorated with artifacts set out all over the rooms. I loved the parachutes dangling around the hangar.

Several rooms around the back of the building are also open – just pull hard on the doors. The boys’ favorite was the lunchette which is stocked full of period appropriate gear the boys got a chuckle out of seeing. (Is that a fridge?)

We ended our visit with a picnic dinner on the lawn. There is plenty of space to have your picnic and on a busy day you might even get to watch planes take off and leave from the airfield. We may stop back here in the future on our drives because it has such a lovely picnic space.

I’m always looking for ways to reinforce the activities from our travels. Here are a few books that will help reinforce (or prepare for) your visit. You’ll also find some of these in the Tuskegee Airmen National Historic Site Bookstore.