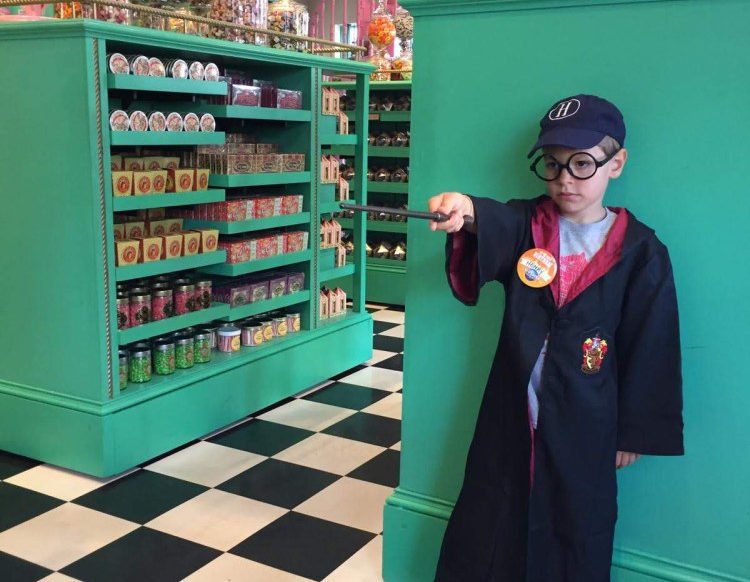 I honestly had no idea if we could do just the Harry Potter things and if that would leave us time to take in any of the other parks. My Big Little is not a fan of roller coasters and is not familiar with many of the characters related to the other parts of Universal Studios Orlando or Islands of Adventure.

With the help of the extra hour from staying on property and a few birthday boosts to the front of the line we had plenty of time to explore both parks. We did venture outside of the Wizarding World of Harry Potter, but only briefly.

Staying at the Cabana Bay Beach Resort gave us early entrance into the park. We were in line at 7:45 for an 8am early open (9am regular open). They started letting people in right at 8am and the whole group headed all the way through the park and into Diagon Alley.

As you walk through parts of London – Kings Cross Station and Grimwald Place – a brick wall on your left marks the entrance to Diagon Alley.

Inside witch and wizard cast members lined the alley ready to help all the visitors. We headed past all the wizarding shops directly to Gringotts for the Escape from Gringotts ride.

We are not really roller-coaster people, but knew we had to try this ride. You need to store all your things in the provided lockers. The small lockers are free for two hours.

The walk through to the ride itself is incredible. You will see all the goblins at work in the bank, and as you head down to the vaults check the desks to see wizarding newspapers complete with moving pictures. You may also get a glimpse of some of your favorite Harry Potter characters behind some of the office doors.

The ride is worth the wait. It is part roller-coaster and part 3D movie. The Big Little and I were both fine on the ride, despite not liking roller-coasters.

Then we headed to Olivander’s so the Big Little could get his wand. We were not chosen during the show, instead a lovely witch on the sales floor helped us out. She spent time having the Big Little try all the different wands until he found one that was just right for him. (The interactive wands cost $50.)

The wand includes a map showing you all the places to practice your spells and also what spell to perform. This is pretty much all he wanted to do for the rest of the visit.

All around the park are markers on the ground that show you what motion to make with the wand, what incantation to say and also where to point the wand.

It can be a bit tricky at first. Luckily. there are wizards and witches near most of the locations to help. Our big problem was making the motions too big – the whole motion should be made in the size of one window pane.

The next thing the Big Little wanted to do was check out all his pet options, so we headed over to the pet store. They have everything you could imagine and we gave them all a try to see what would be his best fit.

We didn’t actually buy anything, but if you do purchase a pygmy puff the staff will hold a cute little naming ceremony for you! We had fun looking at all our options and discussing why they would make good pets.

The Shops of Diagon Alley

We spent the rest of our extra hour browsing the store windows inside of Diagon Alley. The Big Little wanted to stop at each one and pretend to pick up his books, potion supplies and some sweets for the train!

Although it was still quite early, the Big Little really wanted to try three (of the six) butter beer varieties during our visit (frozen, cold and ice cream). We chose frozen first and had a seat outside to enjoy it. It was delicious!

We took a turn through Knockturn Alley, but the Big Little was a little freaked out. They have done a good job of making it seem very off limits. He was not willing to venture back there.

Around 9:30am, Diagon Alley was getting packed and the Big Little was dying to ride the Hogwarts Express. So we headed out from Diagon Alley towards Kings Cross Station.

Just outside of the exit was the Knight Bus, with absolutely no line. The Big Little ran over and enjoyed a few minutes of chatting with the driver and the Dre Head (who also talks to you!)

The phone booth in front of Kings Cross Station was also empty. We popped in and dialed the Ministry of Magic! I can’t tell you what it said, but you should make sure you stop by and get your message.

Then we headed into Kings Cross Station.

The Hogwarts Express was The Big Little’s favorite ride. In order to ride the Hogwarts Express you need a two-park ticket. The ride actually takes you between Kings Cross at Universal and Hogsmeade at Islands of Adventure. We ended up riding it quite a few times. The show is different in each direction and filled with details, so the more you ride the more you notice.

At King’s Cross Station the line magically passes through the brick wall between platforms 9 and 10. You round a corner and are at platform nine and three-quarters.

On the Hogwarts Express you are loaded into a compartment where both windows are really video screens. As the train moves between the parks videos showing familiar places and scenes play on the screens. Chocolate frogs escape their package and stick to the compartment door while outside you pass through the forbidden forest.

Once you arrive at Hogsmeade station you have a chance to meet the driver. The Big Little loved these meet and greets. The cast members made him feel so special and had him in stitches with their silly jokes.

I may have teared up a bit as the Big Little ran from the train station into Hogsmeade. He was so excited to finally be at Hogwarts.

Hogsmeade has lots of places to practice your spell work. We found and tried most of them.

Then we made up a few spells ourselves and pretended to conjure a snowman and other little details in the village.

We popped into the Owl Post where you can send a letter stamped in Hogsmeade. You can also purchase a real howler.

The town is full of so many little details to love. We just wandered around taking it all in.

At the edge of the town, Hogwarts rises from a craggy cliff. The ride inside of Hogwarts is an intense roller-coaster ride. I was not interested in riding it but the Big Little was too short. Instead we asked to “ride the line” so we could see the incredible theme of the line itself.

The line wraps through Hogwarts and the rooms come to life. There was hardly a line so we easily stepped into empty queue spaces to enjoy the rooms.

Some of the rooms even have little shows that go on. We watched all of these and then told the staff we were ready to leave. They jumped us in the line and took us out through a door that put us with the exiting riders.

The other ride in this area is the Flight of the Hippogriff, which appeared to be a tame roller-coaster. The Big Little was not interested, but we certainly could have handled it.

We also caught a quick show on the stage outside of Hogwarts. Over the course of our visit we saw all the offerings, but the Hogwarts Choir, with their singing bullfrogs, was one of our favorites.

The Big Little really wanted to go to The Leaky Cauldron for lunch, which is back in Hogsmeade. However, before boarding the train he wanted to load up on some sweets from Honeydukes for later.

We perused all the offerings and decided we would return at the end of our visit to get something for the car ride. (We ended up choosing chocolate frogs!)

Luckily the Hogwarts Express had no line so we quickly boarded back to Hogsmeade. The “ticket stop” at the train station will help you convert your ticket to a two-park ticket if you had not done so already.

The line for lunch at the Leaky Cauldron was quite long. (It was lunch time.) I pulled out some Harry Potter “Would you Rather” cards that I had printed and laminated to pass the time. (Get your Printable from Get Away Today.) We also printed out the Sorting Hat game.

At the Leaky Cauldron you order at the counter and then they deliver the meal to the table. They serve traditional pub food. We ordered a fish and chips and a butterbeer to share. To our surprise they brought the Big Little his own butterbeer, free of charge, as a birthday treat. We easily split the fish and chips. We’ve certainly had better food, but the atmosphere made lunch a special experience.

This really concluded our visit. We actually stayed in the park until 5pm though. We caught a few more shows and made loops around both Universal and Islands of Adventure. We only rode a few things and caught a few shows but wanted to take advantage of being there.

One Day for the Wizarding World is Plenty

In our experience one day to do the Harry Potter stuff is plenty. Even if you wanted to ride all four Harry Potter rides, there is plenty of time in the day. Particularly if you stay on property and get an extra hour with less crowds.

We got lucky with low crowds and had a chance to check out a few other things. The Big Little really wanted to just hang out in the Wizarding World though, and we had plenty of time to do that.