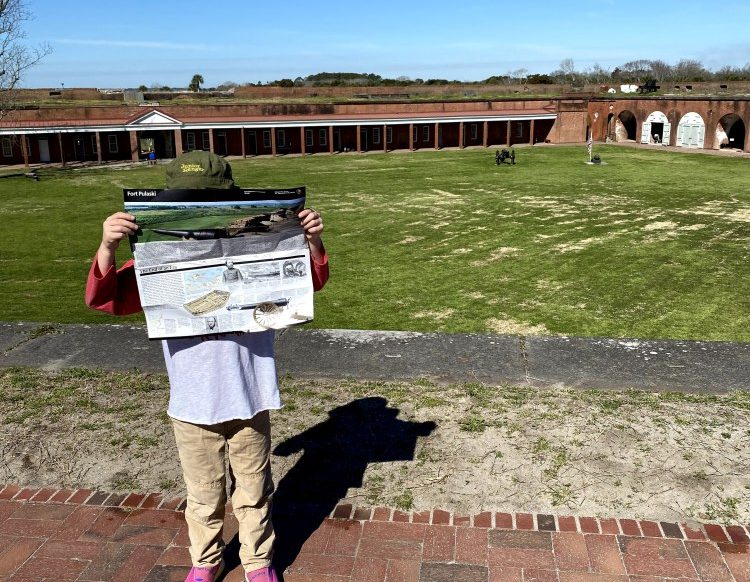 Fort Pulaski National Monument is a must see if you are in the Savannah, GA area. It was high on our list of coastal forts to visit. Fort Pulaski was built to protect the USA from overseas invaders, but the Civil War demonstrated that new technology had overcome these mason fortresses. Fort Pulaski also became part of the underground railroad, once it became a union stronghold. So, it is a wonderful place to visit to demonstrate the complexity of any one place in the history of the United States.

Fort Pulaski is part of the National Park Service. There is a fee to enter, but it is covered by a National Parks Pass. (National Parks are also free for all Fourth Graders and their families through the Every Kid Outdoors Initiative.) The Visitors Center is located outside of the fort. Make sure you stop in to pick up a Jr. Ranger packet as well as a map of the fort. The public restrooms are also located in this building.

When we visited, parts of the fort were under construction. This did cut off parts of our visit, but I still found it worthwhile. The kids of course thought the wooden construction bridges were great.

We worked our way around the fort following the questions in the Jr. Ranger packet. This keep everything relevant for the kids. I think if I had tried to do anything more in depth I may have lost their interest. Part of the ramparts were open so we ventured up there for a view. There are no guard rails up here, so you do have to be careful with the kids.

Construction on the fort began in 1829 and it was in use through the end of the Civil War. Different parts of the fort are designed to demonstrate different uses during different time periods. For example, they have reconstructed the leaning wooden timbers used to protect the interior from damage. These leaning wooden beams were placed against all the walls, fully enclosing this part of the fort.

The interior rooms feature some period furniture. The boys really liked seeing this chess set. The fort served not only as a defensive fort but after it was claimed by the Union Army, Fort Pulaski was a Prisoner of War camp and a stop on the Underground Railroad.

There are plenty of sign posts and a detailed map help create a nice visit. The boys lasted about an hour in the fort. This was plenty of time to finish the Jr. Ranger packet and see all the rooms.

I had also intended to take the kids on the lighthouse trail to see the Cockspur Lighthouse. However the trails were closed during our visit and are slated to remain closed into the spring of 2021.

Fort Pulaski is a very manageable outing with kids. It is on the way out to Tybee Island. A nice day plan would be a morning at Fort Pulaski with an afternoon visiting the Tybee Island lighthouse, some beach time and enjoying some fish on the island for an early dinner before returning home for the evening.