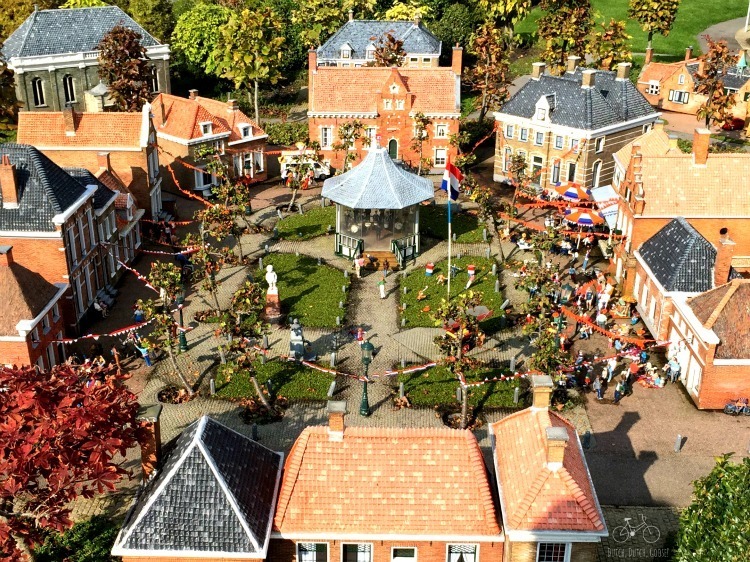 Madurodam: The Netherlands in Miniature

Today we saw every famous thing the Netherlands has to offer, in one afternoon, in 1/25th scale, 20 min away from our house. I know it sounds weird but it was a lovely outing! The kids loved it. We thought we would be at Madurodam an hour tops, but we could have stayed all day. Madurodam is in the Scheveningen area of The Hague. Madurodam opened in the early 1950’s, but has recently undergone a renovation. We drove there. Parking is 7.5 Euro, but the deck is across the street from the park. (There was parking under the highway that appeared to be free, but we were too scared, and our Dutch was too poor to chance it.) You can rent a little cart there for 2 Euro, which you get back when you return the cart and reattach the lock. You will need a 2 Euro coin to rent the stroller. We let both boys walk, and other than my fear of little O falling into the water our kids were glad to be right on the same level as the exhibits. The boys are obsessed with vehicles. The running trains, boats and planes were the highlights. The boys were happy to sit and watch the different types of trains go by giving me plenty of time to enjoy some the buildings. Walking around the miniature Netherlands grew the list of places I wanted to go see in person. It was amazing to see some of the places we have already been. I started to feel like a local when I recognized the miniature Delft. The museum also has plenty of interactive elements. When you get into the park you get a card that you scan at different stations. There is an English option at these stations. Most seemed to just run a video, a few did other things like take a family photo or allow you to mix a track (seriously). These “experiences” are then e-mailed to you. We did not try many of these stations as the boys did not want to wait or wanted to go watch more trains. Several of the exhibits have areas where you can put a coin in to operate a specific thing in the miniature world. We found many of these to be broken, so we did not give any of them a try.

There are some free hands-on activities. In the water area you can play with boats in a canal system that has bridges that need to be moved and locks to pass through. H loved this area. He could have played here all day. In the area with shipping container boats the boys were stacking shipping containers onto the boats. A Dutch family had built a huge tower in the water and when their little boy knocked over the tower a wall of water hit little O, who instantly burst into tears. A strange American-Dutch interaction then occurred. The Dutch father and child continued to play as if nothing had happened. H also continued to play. Jeff and I tried to calm O, finally taking his soaked shirt off and loaded him into the carrier. Once he was calm the Dutch mother approached me and asked if I wanted her daughter’s shirt since O’s shirt was wet. I immediately tried to put her at ease, assuring her we were fine. She then said “sorry you were inconvenienced” and walked away. Meanwhile our kids played on happily together. The park also has two great playgrounds. One is a more traditional playground which we saw from afar but did not venture over to see. The other is an amazing ship-themed playground. As I find with all Dutch playgrounds, in America this would be an adventure course. We are clearly getting used to this as both my children bounded off and I pushed Jeff to follow. Jeff is usually the only parent supervising inside the play structures, but we are ok with this. H is really mastering all the rope ladder climbing structures and O thinks he can follow along. I am sure we will be back!