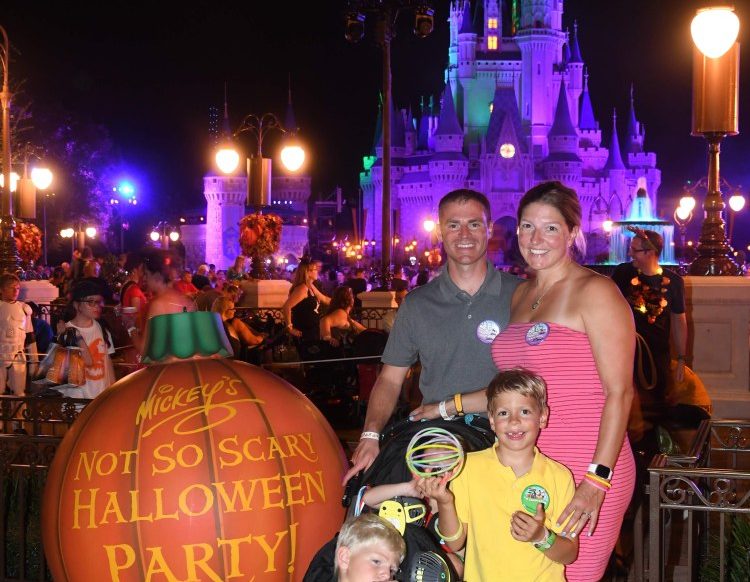 Mickey’s Not So Scary Halloween Party with Little Kids

Our late August visit to Disney World overlapped with one of the first ays of Mickey’s Not So Scary Halloween Party. I jumped at the chance to add this special experience to our trip. As it drew closer I read every report about the party that I could find. I worried that our kids, ages 7, 5, and 2, wouldn’t benefit from a party that didn’t start till 7pm, which is around our typical bedtime. Turns out, I was wrong! We kept the kids up late and had a great time.

We defied all the articles out there about Mickey’s Not So Scary Halloween Party. We didn’t wait in lines to meet characters. We didn’t grab our parade spot hours in advance. We rode rides non-stop. We left before the 10pm fireworks. We did dress up, go trick-or-treating around Disney World and generally spent a wonderful evening together as a family. Amazingly, we even left the park before anyone melted down.

The Littles really wanted to dress up as the characters from Winnie the Pooh. I found most of the elements for everyone’s costumes on Thread Up (a second hand online store) and Primary (solid basics for kids).

About half the people in the park were dressed in a costume. We were glad we went more of the route of “Disney bounding” and hinted at the characters. Everyone was comfortable in their costume and able to enjoy being at the park. Plus, everyone still knew who we were.

We were staying at Port Orleans – Riverside and took Disney Transportation to the park (i.e. the bus). The bus was crazy packed. We should have planned to leave on the bus 25 min earlier for a less hectic and less crowded ride. It was nice though to pull right up to the Magic Kingdom. If we had driven from the resort we would have needed to take the monorail or boat from the Ticket and Transportation Center.

Tickets to Mickey’s Not So Scary Halloween Party allow you to enter the Magic Kingdom at 4pm. Our Disney Planner made sure we had Fast Passes for 4pm and 5pm to really maximize the time before the party started at 7pm.

We made sure to get photos taken in costume before it got dark. I was glad we purchased the Military Memory Maker, because I really didn’t take a ton of photos. I just made sure we stopped by every photographer we saw.

We also picked up our treat bags and party wrist bands from one of the well marked Halloween party stations. I have one son who has some food sensitivities so he and my husband did the allergy friendly trick-or-treating. The rest of us did the regular candy. Honestly, we should have all done the allergy option just to keep things simple.

Trick-or-treating doesn’t start till 7pm so we hit the rides hard before the treat stops popped up.

We had a Fast Pass to Buzz Lightyear, but also walked onto the ride a few more times that evening. It is just a favorite with my kids. As there are five of us we rode as a group of two and a group of three.

We also hopped right onto the people mover. All five of us fit into one car.

Winnie the Pooh was another ride we were able to just walk onto. The boys loved the queue here so much that we had to let a bunch of people pass us in line so we could play a bit more.

The ride itself was also a huge hit. We all fit in one honeypot! The boys giggled with delight when the pot bounced like Tigger.

The Haunted Mansion was also a huge hit with the kids – who would have thought! The boys wanted to ride it a few times, but we saved subsequent rides for another Magic Kingdom day. Again this is a ride with a great interactive queue so our short wait was not a problem.

We also walked right onto Dumbo a few times. This is one of the few rides we ended up splitting up for. Jeff and I each rode with one of the Littles and the Big Little rode on his own elephant.

Once the trick-or-treating stations opened this was all the boys wanted to do. We went from station to station collecting treats. The distribution of treats was completely uneven. The Little would get a handful of candy, while the Big would get one coin. Coins are exchanged for one piece of allergy-free candy. At the end of the night though everyone went home with enough candy to keep them happy.

I thought we would spend some time meeting some of the special characters who attend the party. However, character lines were hours long. We hopped on rides instead of waiting for photo opportunities. We did end up meeting a few characters walking through Magic Kingdom who stopped to chat with the Little Little. Sometimes he is too cute for even Disney villains to ignore.

We did hold out for the incredible Halloween parade. We found a spot a few rows back outside one of the allergy locations where you exchange coins for candy/toys/crafts. The Little and Middle were in the stroller and the Big Little found a spot on the ground. They ate some candy and played with some glow sticks until the parade started.

The parade featured all their favorite characters plus a bunch of the Disney villains. The boys were so into it….and let’s not lie, so was I!

Post parade we opted to head out of the park for the evening. We actually hit the parade a few times so it blocked our exit. We noticed that there was hardly anyone by the Fire Station and Town Hall. This would have been a great place to watch the parade.

Since we couldn’t exit until the parade was over, the Big Little and I were able to dash across the road to the fire station to pick up the special Sorcerers of the Magic Kingdom card that is only given out at the party.

We left before fireworks. This is my only regret. Jeff actually caught the show on Thursday night with some friends at a DVC property. We should have just stayed near the exit and tried to hold out for the show. Oh well, instead we caught an easy bus ride home and had everyone in bed at Port Orleans before 11.

The littles are still talking about trick-or-treating at Disney World. That, plus all the rides we were able to ride made the special party ticket worth it. (Plus we hadn’t used a park ticket that day!)

This post contains affiliate links. If you purchase through one of our links, Dutch, Dutch Goose gets a small payment at no cost to you. As always all opinions are our own.