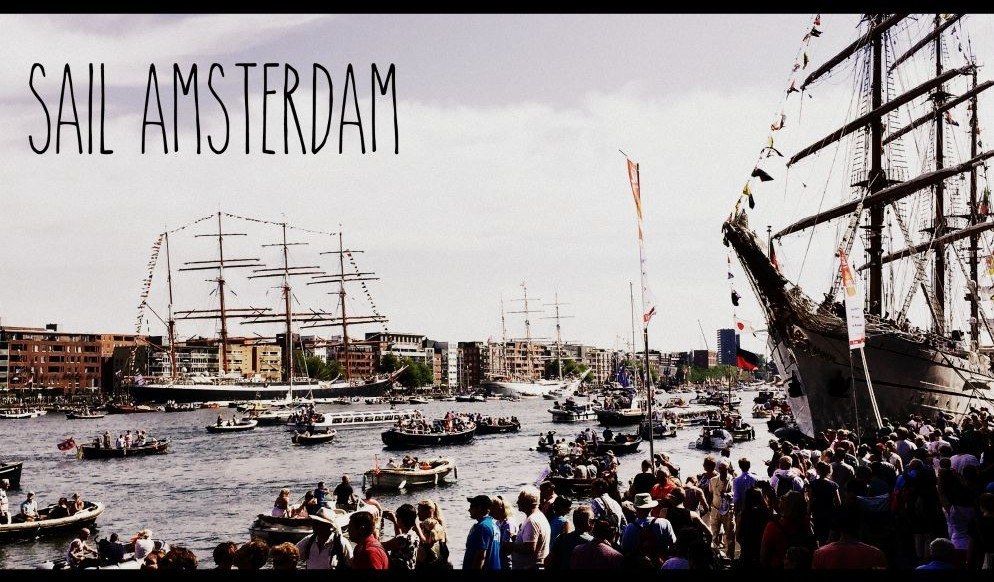 Sail Amsterdam (SAIL) happens once every five years. It is one of the largest tall ship festivals in the world. The 2015 date happened to fall on our first full week in the Netherlands. We couldn’t resist the chance to see it because we won’t be living here the next time it comes to town in 2020.

If we had our whits about us we would have tried to go to SAIL on a weekday. There are tons of ships you can board and explore for free. We heard that on weekdays you can walk on and off many of them with limited to no wait. Having just arrived in the country, we were still unpacking our household goods. So we missed this chance and instead went up on Saturday.

The crowds were crazy.  The lines for all the ships were crazy long. The littles were not interested in waiting in line or even boarding the ships, so we just observed them from the dock. Lots of people enjoying the boats at SAIL 2015.

The other recommendation I would make is to book a boat tour in advance. These ships are best seen from the water. There were lots of tour and lunch options that would have been amazing. Our spontaneous approach worked fine though. Getting to SAIL was easy because it’s just a five minute walk from Amsterdam Central Station.

We biked from our house to the Delft train station, planning to get on a train to Amsterdam. Unfortunately there was a line interruption between Delft and Den Haag. Due to a disruption on the tracks we had to catch the tram to the Hague.

We headed across the train station parking lot to the tram station and caught a tram to the Den Haag Central station. We easily caught a train from there to Amsterdam. The interruption set us back about 35 min.

Once in Amsterdam the SAIL information booths and large maps were set out everywhere. We were free to walk around and see the boats. There are set walking paths to keep everyone moving in the same direction that helped with crowd control. It was a real treat to see this Dutch efficiency. We spent the day enjoying the boats, music and food. So many boats on display, and even more enjoying the boats from the water.

As for food we mostly just tried as many dutch treats as we could find. Early on we found amazing seats right on the water so we grabbed a few new treats to try. We tried some smoked salmon and fried shrimp both served on rolls.

Later we found a french fry stand we just had to try. They had ketchup for us,  which Jeff insists on. The kids and I are coming around the mayonnaise, or even better the mustard/mayonnaise combo that tastes exactly like Chick-Fil-A sauce! The french fry truck we just had to try. Noah’s Arq Gastropub is the perfect place for a snack.

We learned early on to never get on the train hungry. So we stopped at the Noah’s Arq Gastropub. It has great outdoor seating, good beer and some delicious toasties. We even got to watch a bridge over a canal open, one the kids favorite things to watch. They did not have high chairs.  We just parked O in the stroller next to our picnic table to eat. Remembering where you parked your bike is the hardest part of the trip.

Our only other hiccup of the day was upon arrival back at the Delft train station. In the bicycle parking garage, we discovered Jeff’s rear tire was completely flat. Luckily, there is a bike store in the train station. They were able to patch our tire while we waited. The bike shop is open 24 hours per day, 7 days per week. The repair was reasonably priced and the repairman even installed a rack harness for us.

Having the two hiccups (train delay and flat tire) on a weekend when we weren’t in a hurry was a blessing. We learned how to ride the trams and how to fix a bike early in our time in Delft so it was a hugely beneficial day.