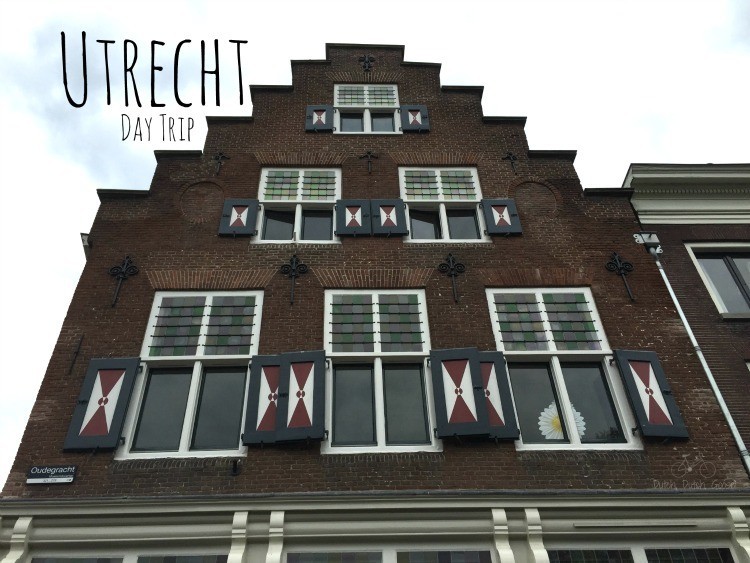 Its Open Monuments Weekend, which means that about 4000 monuments all over the Netherlands are open to the public for free. Some of the places can be visited year round for a fee and others are private and only viewable for this one weekend. My aunt had just sent me this great article from EuroChepo’s Budget Travel blog on Utrecht. We were overwhelmed with all the possibilities but decided Utrecht was the perfect place to spend our Saturday. We were not disappointed. Utrecht is an easy 45-minute train ride from Delft. We biked to the Ypenburg Den Haag train station and easily transferred trains in Gouda to arrive in the Utrecht Central Station.  Utrecht Central is the busiest train station in the country and is currently under construction. We took a few wrong turns in the train station. We soon found our way through the large mall and into central Utrecht.

Utrecht, like much of the Netherlands, is full of beautiful buildings. We love to stroll from place to place and take in as much of the town as we can.

We grabbed a few treats from the bakery set up as part of the Saturday Market for everyone to nosh, while we headed to our first “open monument.” At the St. Catherine’s Church, a bit outside of the center, we were given a personal tour since all the materials were written in Dutch. Our guide pointed out where excavation revealed ornate paintings and fonts from the Catholic Church housed here before they were covered over during the Reformation.

They were offering organ tours a few times on Saturday, but with a half-hour to wait for the next tour we pressed on.   Our next stop was the Buurkerkhof tower, which we were able to climb. The round spiral stairs were steep but our three-year-old managed to climb each one on his own. The tour was completely in Dutch. Half-way through the tour our guide, realizing we spoke no dutch, let us climb up to the observation area on our own to enjoy the view while he finished the Dutch tour.  We had an amazing view of the Dom tower, the highest bell tower in the Netherlands.

We caught him on the way down just in time to watch him demonstrate ringing one of the tower bells. The climb down was steep and harrowing. We soon discovered that every other building was open as part of the open monuments weekend and started just popping our heads in wherever we saw the special banner. A pottery studio in an old cellar, a hidden Mennonite church and a music repair shop were all open for viewing. We popped in and out of as many monuments as we could find. The kids were surprisingly engaged. We never spent very long in any one location. Some places offered English tour brochures but at some places, we were left to piece things together using Google Translate. The Graffe Floris Cafe is known for its apple ball. Everyone sitting outside was enjoying an apple ball as well as a coffee. We stopped and ordered our coffee, bubbly water, two apple balls and a toasti for the kids and rested a bit. Now, the apple ball was delicious. It was just an apple coated in a puff pastry, baked and drizzled with delicious cinnamon and sugar. We wanted to see the Sonnenborgh Museum on the other side of town so we headed that way after our break. At the bastion turned into an observatory we  touched a meteorite, looked through solar telescopes and ventured into the basement where they have exposed part of the bastion. We found a small playground and let the kids out to run around for a bit until everyone was hungry again. Lunch was at a cafe (‘T Oude Pothuys) on the river. The food was nothing special but we enjoyed our kriek (cherry) beer and the view of boats on the canal. If you do stop here venture inside, as the cafe is built into one of the old storage areas that runs under the street. They also have quite the musical lineup and is probably pretty popular in the evenings.

The plan was to head back to the train station but we were lured into a Protestant church by the “open monuments” sign. There we met a tour guide who encouraged us to venture over to the Catholic Church to compare its ornate decoration to the stark white walls of the church we were in. The walk meant passing through the Saturday Flower Market, one of my favorite activities here. Somewhere on the walk back to the car we noticed the littles had fallen asleep. We spent the train ride home with a sleeping three-year-old and a happy one-year-old, planning our return visit to Utrecht. If your looking for more information on Utrecht hop over to A Flamingo in Utrecht for beautiful pictures and great travel tips.