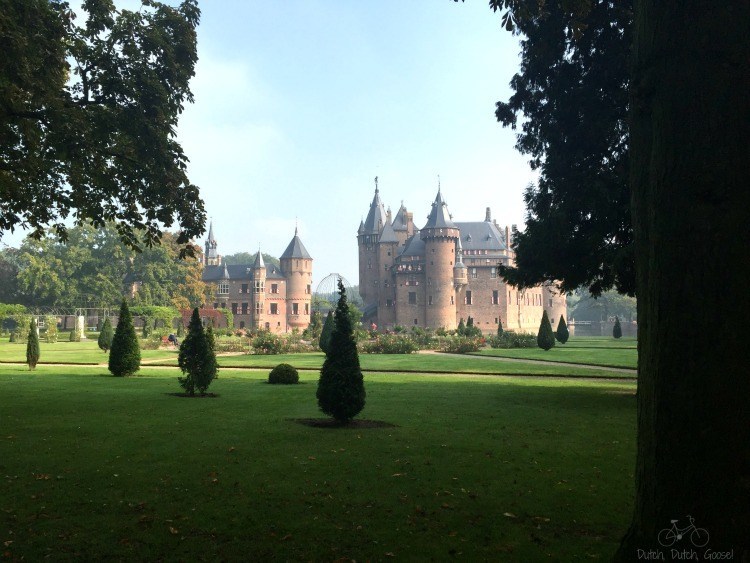 Sunday morning we all woke up a little bit sluggish. The cold weather has come in and the cool evenings are leaving us a bit drained. Jeff rescued the morning and made French Toast. We were sitting around the breakfast table chatting when it dawned on me that we only have 150 weekends in country, so we better get our act together. Previously we had discussed visiting Kasteel De Haar in Utrecht. Jeff made a quick phone call to make a reservation for the 1:15pm English tour. Reservations are recommended but not required.

Utrecht is an easy hour drive from Delft. The castle has plenty of car parking (€4) and even more bike parking. Our only setback was that our Museumkaart had not arrived yet, so we had to pay admission. H was instantly in love. He is big into pretending and even wore his prince sash from Disney World. H was in awe before we ever got through the castle gates. I was in awe as we turned the corner into the formal gardens. I felt as though I had stepped into a storybook The Castle is spectacular. It is a bit of a “fake” castle as it was restored in the early 1900s on the ruins of the original castle. The architect in charge of the 20-year project is the same one who did the Amsterdam Central Station. The re-designed castle served as a place the family could entertain guests and family in the summers. The family donated the castle to the foundation, which runs the tours, but the family retains the right to stay and entertain there periodically. We arrived around noon with a packed picnic in hand. Jeff made the most amazing walnut, honey and brie sandwiches. There is a picnic area behind the castle (#10 on their map). There are a few picnic tables. We brought a picnic blanket, had a lovely lunch and enjoyed the view of the castle. There are also a few cafes – one inside the admissions area and one near the bike parking. The grounds are extensive, so plan plenty of time to explore. You can also venture into the town, designed by the same architect to house the landowners displaced by the construction of the castle grounds. The kids loved running around, but we were glad to have brought the stroller. The deer park, a Dutch necessity it seems, was a big hit with the kids. The bucks were running around after each other and chestnuts to feed the deer were plentiful. (So plentiful a few families had brought bags to collect them for themselves.) The real labyrinth was also a huge hit! The kids loved running around in the Harry Potter and the Goblet of Fire-esque maze. Jeff actually got lost with little O for a bit, he kept hitting dead ends. We discovered a variety of birds and wildlife on the property. The recent rain also meant discovering lots of “fairy mushrooms,” as H calls them. The layout of the surrounding grounds relies heavily on water features. The Grand Canal is one of the most stunning and is home to several swan families, Continuing to walk around Kasteel De Haar you discover numerous new views of the castle, from bridges and across the water. The castle appears different from every angle. Our favorite though was through the formal garden and across the widest part of the moat. If you want to see inside the castle you have to go on a tour. There are no pictures allowed inside the house. We opted for the English tour over the children’s tour in Dutch. Our kids typically do well on tours and we are able to keep them entertained by pointing things out and making up little games. There were a few other kids on our tour as well. You cannot bring a stroller on the tour, but it can be parked inside the castle. There are quite a few stairs heading into the castle, so be prepared to unload. There are lockers for storing bags. Anything larger then a small handbag is not allowed on the tour. Tours start in the basement of the castle where there is a bathroom available. I did manage to sneak one photo before the tour started (and technically before we knew pictures were not allowed.) Our tour guide was giving her first English tour, which was evident. Her English was excellent but her pacing was so slow. The kids were fine for the first 10 minuets in each room and then lost complete interest. We made it through the tour without disturbing the group too much – far less then the other kids on the tour so we will count that as a win.

The tour covers the kitchen, main lobby, dance hall, knights hall, male guest room, the Baroness’s room and the Baron’s room. My favorite room was the Baroness’s room. That room was actually designed by a separate architect to look like her childhood room in Paris. The kids loved the kitchen which had a full set of copper-ware and the old coal-fired stoves. (The new modern kitchen is not part of the tour.) After the tour we poked around the gardens for a bit longer. The weather was perfect. The kids loved strolling around the gardens. With blood sugars tanking we headed for the cafe in the stable area, near the entrance. I had a seat with O in the stroller and ordered some cake and coffee. H and Jeff played ball in the grass while we waited for everything to arrive at the table.

The boys were exhausted from our trip and both fell asleep on our drive home having enjoyed their day at the castle. We would love to go back if they had any special events going on, although I’m not sure the kids are up for another house tour. Farrah over at The Three Under has a wonderful review of her visit to Kasteel De Haar with her boys. They took the kid-friendly tour in Dutch. You can read her trip review here.