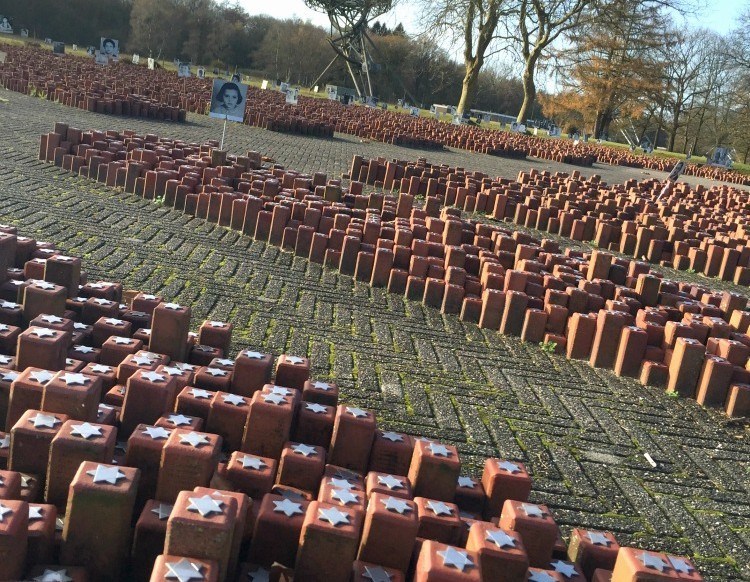 (Otherwise known as the time we took our toddlers to a WWII deportation camp.)

One of the challenges of family travel is balancing kid and adult interests. Typically, we do a great job of hitting highlights for Jeff and me while keeping the kids engaged. This is not one of those trips.

I take some responsibility. I failed to review the itinerary prior to our arrival at Westerbork. Upon arrival Jeff showed such enthusiasm  (and some confusion) over the events of WWII that, against my better judgement, I said we could stay. A visit to Westerbork is divided into two stages. The museum, adjacent to the parking lot and a visit to the actual camp site.

The Museum covers the history of Westerbork through pictures and multimedia presentations. There is an English book you can request at the front desk that explains all the exhibits.

Westerbork was an assembly and detention point for Jews and other Natzi opposition before their transport to concentration camps.  Anne Frank and her family were deported out of Westerbork on the first of the three final trains to leave, in response to the advancing allied troops. The camp was liberated by the Canadians in 1945. Somewhere mid-museum Jeff realized that bringing a three-year-old to a Holocaust museum may be a bit too intense. The museum is so well done, but the imagery is tough. Our parenting style is to always answer the kids’ questions honestly but at an appropriate level. Even without much context H’s observations were astute.

“Why are people being loaded into boxcars? Boxcars are for animals.”

“Some of the people have stars on them just like the Sneeches?”  (See Sneeches on Beaches.)

We calmly explained a grossly simplified version of WWII history but hurried our visit through the museum.

The end of the museum has information on Westerbork’s other uses. Post World War II, it was repurposed as a penalty camp for Nazi collaborators. Then it was used to host Dutch Nationals who were fleeing the former Dutch East Indies, now known as Indonesia. Finally, from 1950 through 1970 it was used to house refugees from Muluku Islands. In the late 1970’s all camp structures were demolished . After you are done in the museum, you hop on a bus to head out to the camp location. The bus runs every 20 min.  There are a variety of large array radio telescopes there now so you cannot drive your personal vehicle. The drive is amazingly scenic. The bus drops you off in front of the camp commander’s house, which is now encased in glass to preserve it.

The camp has a few restored buildings and several artistic memorials. It is a somber place, but  more abstract. I could feel us all relax. There is a beautiful monument with an individual stone representing each person who died in a concentration camp after being transported from Westerbork. We ended our visit with a stop in the cafe for lunch. There is a small selection of sandwiches, cakes and coffee but all well made with fresh ingredients.

I would highly recommend this as a stop for anyone interested in WWII or Dutch history and those with slightly older children who can handle the mature subject matter. I’m always thankful we have been able to introduce so much history to the kids but I do not want them to be scared of the world.

Just outside of Westerbork is the city of Amen, Netherlands. Nothing particularly special about Amen. We just love cities with fun names. Westerbork was part of a road trip that included stops at Westerbork, Borger,  A Star Fort and Groningen.