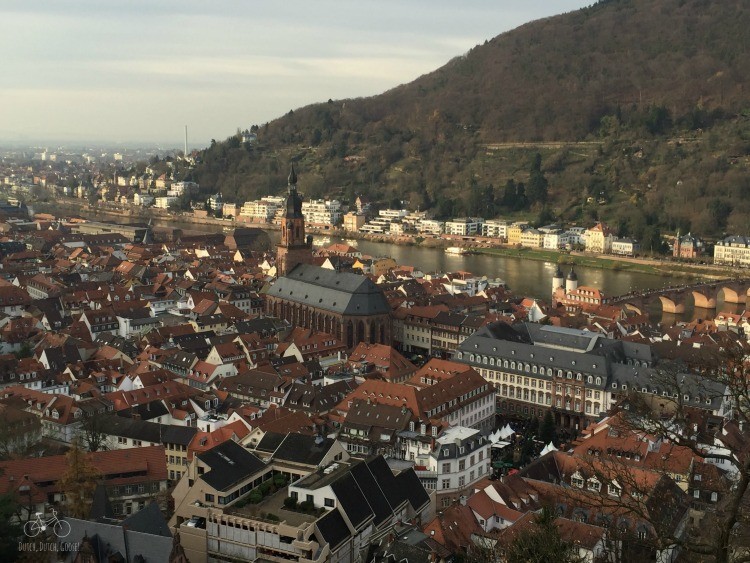 We typically get an earlier start than most of Europe. Thinking we needed a stop before arriving at the Heidelberg Christmas Markets we drove to a nearby town to check out a castle ruin. The castle is seated on top of a vineyard. The Internet wrongly informed us we would be hiking through the vineyard to reach the castle. We followed the directions and parked directly behind the castle. The castle’s crest is unfortunately, for us, was an arrow pointing to the left. Seeing the crest on top of the castle we mistakenly interpreted it as a sign to walk around to the front. Ha! This little jaunt did provide us with breathtaking views of the town below and of the castle through the vineyard. We  decided just to try the small door in the large gate. It was open. We wandered inside and found absolutely no one there. There was an amazing view of the city from the courtyard. The Internet had also misinformed us that we could climb the tower for a small fee. When a man appeared at the door Jeff inquired and we were informed it is no longer safe to climb the tower. The space is now an event space, but they did let us in to have a look around! The plan was to arrive in Heidelberg around noon, just as the markets were opening. This was a huge mistake. Parking was a complete nightmare. The police were closing off roads and no one knew exactly where to send anyone for open parking spaces. We retreated to the farthest parking deck we could find, which had plenty of spaces.

The city was crazy with people checking out the markets. When the crowds became too much we jogged up or down a block, choosing the empty city streets over the market stalls. Heidelberg has six separate markets spread across the city. We chose to head to the market in the Heidelberg Palace. We took the funicular railroad up to the top. The line was long but moved quickly and the kids loved the ride. The funicular railway combination ticket includes entry into the palace.  The railway is mostly covered so your only view is of a brick tunnel. The market had amazing views of Heidelberg. The overlook was a popular spot to stop and enjoy a mug of warm, mulled Gluhwein. We tried out some sweets and did a little Christmas shopping. My biggest regret was not trying the salmon that was smoking over an open fire. It smelled divine. My second regret is not even stopping to snap a photo of it. We walked through the market toward the castle. I did find these adorable bug houses that I’m hoping Jeff will make for us in the summer. H was chomping at the bit to explore Heidelberg Castle. We ran around the courtyards investigating the years of renovations that have left a mishmash of architectural styles.  To see inside the palace you will need to book a guided tour. The kids were certainly not in the mood for that so we enjoyed the views and exterior. The German Pharmacy Museum is also housed in the castle and included in your castle ticket, but we did not venture inside. We did pop inside to see the Heidelberg Tun, the largest wine cask in the world. You can walk all the way around it. They have built a dance floor on the top so H of course took a turn and can now say he danced on top of a wine barrel. The line to ride the funicular railway down was out the door. We opted instead to walk the 315 steps back down. The stairs are lined with grand houses and each step is marked with descending numbers. H enjoyed reading the numbers as we grew closer to the bottom. We wanted to make a quick stop at the Jesuit Church in Heidelberg. Holy Spirit Jesuit Church has the most stunning white interior, standing in stark contrast to its pink exterior. Although you can view the steeple from any high point in town, wandering the narrow streets of Heidelberg you feel as if you’ve made a discovery, rounding the corner to come upon this church. Our final stop was the Heidelberg Carousel in the kids area of the Christmas Market. Who can resist a ride on one of these adorable carousels?