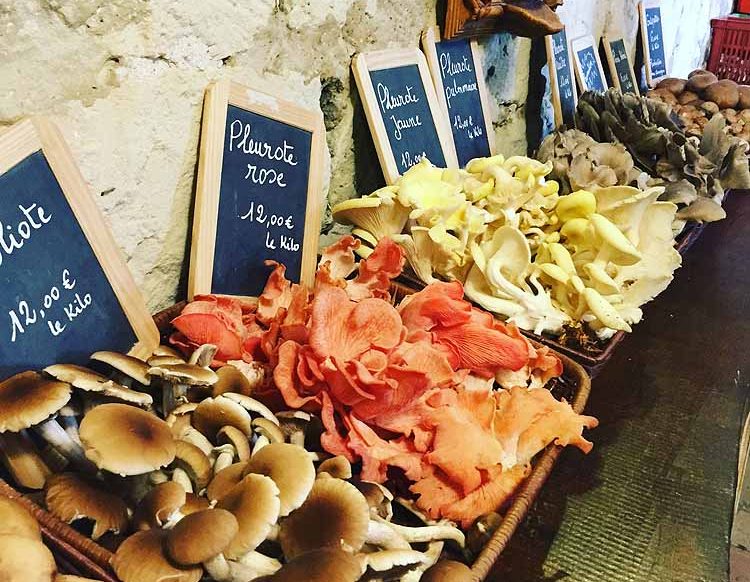 “Champpignons Delalande” or as we called them, The Mushroom Caves, is one of those strange stops that you have to make when traveling around a country in an RV. We actually almost didn’t make it here. As we approached the bridge, a large warning sign said large vehicles should use caution. We were close to the height requirement on the bridge. We waited patiently until the bridge was clear and headed over. Then the worst thing happened: a truck pulling a camper car entered the bridge facing us. We slowed to a stop and so did they. Neither of us wanted to be the one to pass. Due to the trailer, they could not reverse off the bridge and we were too far over to reverse.

Instead, I got out – as did the passenger of the other vehicle – and we inched the two cars passed each other. There were literally millimeters between the two cars and between the side of the bridge and the top of the RV. Jeff and I were both a bit shaken when we got to the other end. I wish I had a photo to show you just how tight the whole thing was, but I was so focused on getting us off that bridge, I failed to take a photo! Luckily, just over the bridge were the mushroom caves. The caves were created when the stone was excavated to build the Châteaus of the Loire Valley. In 1893, they started growing mushrooms in the cave to meet the demand from Paris. In 1930, they modernized the mushroom growing in the caves. At this point the caves could produce 200 tons of Mushrooms per month.  In 1991, they ended this type of cultivation, switching instead to growing high-end mushrooms and opening the caves to tourists. The entrance to the caves is through the shop. Once you pay admission, you are given a little guide to help you navigate the caves. Arrows are painted on the wall to help you find your way as well. There are so many different types of mushrooms growing. I actually did not even know mushrooms came in so many colors and shapes. In addition to all these amazing mushrooms, there is a bit of a museum set up as well. They have the largest mushroom they’ve ever grown in the cave and a collection of poisonous mushrooms. There was also an art gallery of sorts. Mostly, though, we were just amazed by the variety and quantity of mushrooms. My Middle Little is not a huge fan of caves and quickly lost interest. Jeff carried him and he stuck with it, but was not crazy about staying any longer then necessary. I enjoyed looking at the picked mushrooms in the shop. We were able to find all of these actively growing in the cave, which was fun. There is also a restaurant which people were flocking too. You need reservations as it is inside the cave and quite small. The shop has mushroom caps you can purchase to eat if your just looking for a snack. There are regular and mushroom shaped picnic tables out front. We had left the food down in the RV, so just spread our blanket down there. We had no idea that not far down the road was a whole little town full of restaurants. If I were redoing this visit, I would have just walked or taken the bikes from this parking lot into the town for lunch.

This was such a fun little stop. If your in the area, it is worth popping in to see the variety of mushrooms, but don’t go out of your way unless you’re a mushroom enthusiast.