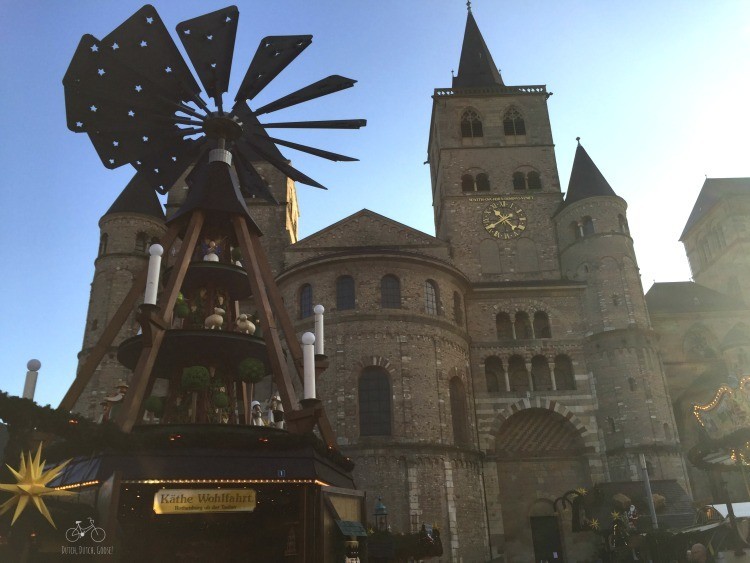 Our German Christmas fun just kept going! We made a stop into Trier, Germany for a morning of fun before driving back to the Netherlands.

Trier is Germany’s oldest city. Roman ruins dot the city and we wanted to check them out. We parked a block from Porta Nigra. This city gate dates to A.D. 180. There are guided tours inside the gate, but we opted to enjoy the view by walking through it. At 9am, we had the place to ourselves. The kids loved running through the gate and looking up to see where the wooden doors would have been. Next we stopped at the pink Electoral Palace. The gardens were impressive, even in winter, and the boys ran wild down the gravel paths lining the reflecting pool. Then the kids spotted the huge playground just east of the Electoral Palace. As usual the playground was intense! We of course had to go give it a try. The Imperial Baths are just a bit farther down the path at the far end of the palace gardens (south). There is a €3 fee to enter the baths but well worth it. The bath houses were a huge part of Roman culture and were central to their cities. H enjoyed leading the tour through the old service tunnels, which are mostly lit by skylights. There are a few dark corners, but we felt safe. There was quite a bit of restoration going on leaving much of the Imperial Baths covered in scaffolding. It took a bit away from the majesty of the sight but did not hinder our ability to explore. I’m still baffled at walking next to walls originally built by the Romans. The amazing part about the Imperial Baths is how you can wander through the ruins on your own. The marked paths take you over, under and through. We had plenty of time to notice all the small details in the construction of the baths. The classic Roman arches are the most stunning and reminded me that we were standing in the center of life in this Roman city. There is no shortage of churches to be explored in Trier and they made up the remainder of our visit. There are so many churches in Trier that we actually became confused which church we were entering. Jeff was referencing a Rick Steves travel guide and we still walked into the wrong church. The Basilica of Constantine (Evangelical Lutheran) was originally built as Roman Emperor Constantine’s thrown room. The building was destroyed in WWII and restored as a shell with a modern ceiling. The Cathedral of Trier (The Dom) is the oldest cathedral in Germany. The Cathedral is constructed on the foundations of Roman buildings. It has been destroyed and rebuilt numerous times in its history. A guided tour of The Dom is available seasonally. The Cathedral is home to several relics. The robe Jesus was wearing before his crucifixion being the most notable. It is kept in an annex and is rarely on view to the public. We took the opportunity to pray in front of the annex chapel. The Cathedral also has one of the holy nails from The Cross. The Church of Our Lady, was my favorite. We wandered in by accident thinking it was the entrance to the Dom.  It is the oldest Gothic church in Germany and is shaped like a Greek Rose. When we entered the light was illuminating the altar though the stained glass. There are extensive Roman ruins under the church. There is a small section of excavated area that is lit (when you pay €0.50) to see the Roman ruins beneath the church. Never forget to look up in European churches. The ceilings are all so different, but incredibly beautiful. The Christmas Markets were hopping when our impromptu church tours were over. The Cathedral Square held many of the 95 Christmas Market booths. Although Trier’s market was the smallest of the trip it was one of our favorites. Instead of a proper lunch we grabbed a few treats from the vendors while we perused the shops. Langos, from a Hungarian booth, consist of a deep fried flat bread placed in front of us on a paper towel. We had the choice of covering it in garlic or chili – we chose garlic. It was then covered with cheese and a swirl of sour cream. Delicious! Potato pancakes were served with a side of apple sauce or tzatziki. These delicious treats were a hit with the whole family. Traditional gingerbread is decorated with icing and well wishes and can be hung on the tree. Street pizza is always a hit with these boys. There were a variety of toppings to choose from, but my guys both chose types of sausage. Missing is a picture of me with my huge German pretzel.  I had to ask specifically for a warm one and it tasted fantastic.

We like to let the kids determine our pace when we can, but there are a variety of city tours available if you are looking for something a bit more structured. There are a few Roman ruins that we missed on our trip. The bathrooms at the TI near the Porta Nigra are clean and convenient (€0.50). They opened the family restroom for me to go in with the two little boys, which is always a huge help.

We were exhausted from our Christmas Market road trip, but also excited to see a few more markets next year. I’m loving how they all have their own character.