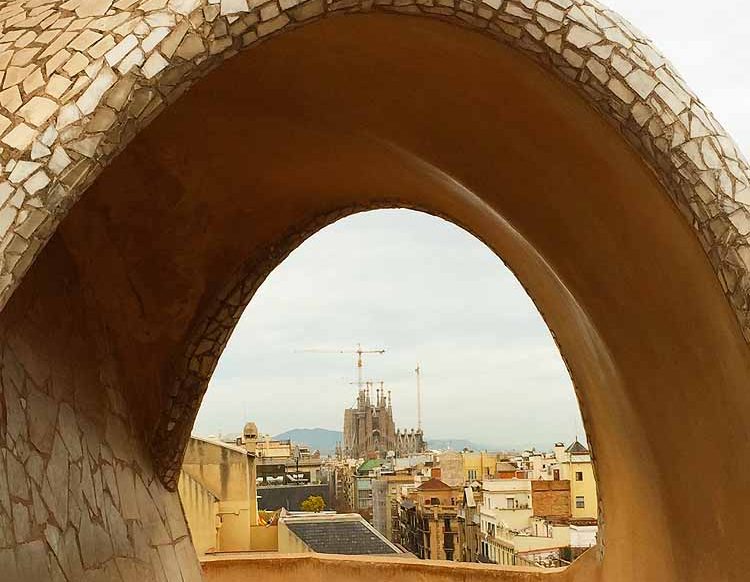 Barcelona is a beautiful city positioned right on the coast which is probably one of the reasons it is overflowing with tourists. Another issue is its status as a cruise port and gateway to the Mediterranean – which is exactly how we ended up in Barcelona. We booked a 12 night Mediterranean cruise with MSC and planned to get on the boat in Barcelona. (More on that later.) In order to make sure we made it on the boat on time we planned to spend a few days before the cruise in Barcelona.

As a result of Barcelona’s popularity, tourist attractions are expensive and almost all require advanced booking. We picked a few of our favorites and made arrangements before our arrival. Barcelona is large, so it takes time to get from place to place. We recommend taking your time here if you’re planning to see a lot. Or just take it slowly, like we uncharacteristically did, and pick a few must sees.

The Barcelona Airport is large but has plenty of family services. We had to walk quite a bit from our gate to the bag check, but found our bags waiting on the belt when we arrived. There are bathrooms at the baggage check which is always perfect for us to get everyone settled before we head into town. The Barcelona airport has a few small playgrounds scattered throughout the airport. They are just large enough to let the kids get a bit of energy out. The Priority Pass lounge in Barcelona had plenty of space for us to stretch out. Although they don’t have a specific kids area all the families had gathered in the back room. We unpacked some toys and let the kids just play on the floor while we unwound a bit from the trip. We opted to take a bus into the city, although a train is also available. The fly bus is well marked and tickets are purchased on board. There is plenty of space for luggage. It takes about 20 min to reach the square where we transferred to a local bus, that dropped us off near our hotel. This second bus was crowded and we found it more difficult to navigate with our luggage.

We relied heavily on public transportation in Barcelona. You will absolutely want a stroller as the city is spread out. Strollers easily go on buses, but there are not elevators in many of the Metro stops. We had to carry the stroller down the stairs at nearly every station. Tickets can be purchased in machines at any of the stations. We found the 10 pass card the best option. It can be used for multiple riders. When you purchase the 10 pass rides you get a slight discount. Overall the public transport was clean and easy to maneuver. There is no shortage of good food in Barcelona. We saw so many great options everywhere we looked. We however stuck mostly to quick service places. We grabbed our first lunch in the airport when we arrived at a sandwich bar. We picked up noodles for dinner along with a smoothie and a few things from the grocery store and ate back at our apartment. Breakfast was with our hotel room, although we did hit a few bakeries for treats and coffee as we came across them during the day. We had dinner and breakfast at the Majestic Hotel bar thanks to a food and beverage credit. So we really cannot provide much advice about food options in Barcelona except to say that there are plenty.

As I mentioned before almost every big attraction in Barcelona requires a timed ticket. If you make your reservations in advance you will avoid long lines and quite a bit of headache.

We had a 4pm reservation at the Picasso Museum for the whole family on our day of arrival. We arrived to find a large line at the ticket counter but we were able to walk right in. We opted not to do the audio tour with the kids. The museum is stroller friendly although you will need to ask for access to the lift. The museum covers several periods of Picasso’s paintings. It was interesting to see all the drawings he did of particular compositions displayed together. You can really see how he was playing with cubism and color. The Big Little really enjoyed the museum. It took a bit more to get the Middle Little interested. Jeff asked for my chew beads necklace and had our Middle Little find the colors in the painting on the necklace. The boys also loved the movie showing a recreation of the sets and costumes Picasso did for the Ballet in Barcelona. We had 9am (first entrance) tickets to Gaudi’s Sagrada Familia Cathedral. Again we arrived to find the line for tickets quite backed up. We were sent to the stroller and handicapped “accessible” entrance. It was the first day of this entrance being opened and after waiting for 15 min for the security equipment to be ready we were just let in. We had to walk all the way around to reach the ramp. It may have been better to just carry the stroller up the stairs.

The Cathedral is breathtaking. The boys have seen so many churches in Europe but even they were blown away by the use of colors. Gaudi’s designs are accessible since they mimic the forms in nature. The kids instantly noticed how the pillars of the Cathedral look just like trees reaching up to the sky. The Cathedral is still under construction and we didn’t opt for the tickets that allow you to go into the tower. Instead we spent a bit of time in the museum that lets you see into the workshop and also gives you a peek at Gaudi’s tomb. The rainbow stained glass windows made the largest impression on the kids. The Big Little is still producing doodles of the windows and their magical colors. I was also taken with the carvings on the front of the church depicting the birth of Jesus. As we came through the handicapped entrance we nearly missed seeing this up close. We had to double back to see it. Every detail is included and it’s just stunning.

We tried to have a bit of park time after this but were thwarted by hordes of school children using the playgrounds. The playgrounds we saw were small with just one small piece of equipment. They would have been perfect for a family or two to enjoy, but with a whole school our kids were overwhelmed. We also had afternoon tickets to see Gaudi’s La Pedrera. These tickets included an audio tour. The Big Little loved the tour but the Middle Little was quite distracted and couldn’t keep his earphones on. Jeff ended up sort of doing his own thing with him. The apartment building has an incredible roof that both kids loved climbing around. One of the arches on the roof perfectly frames Gaudi’s Sagrada Familia. It is a view you don’t want to miss. The audio tour is full of short descriptions as well as classical music so it is really accessible to kids 5 and up. The tour covers the roof, a museum in the attic and then you get to see one of the apartments as it would have been designed by Gaudi. The tour is not stroller accessible. We had to fold and store the stroller for the tour. We also booked a 30 min Flamenco show at Los Tarantos. This show was the perfect length for kids. Many of the Flamenco options are longer and include dinner. We knew the kids would likely not make it through a long late show so found this half hour option as a perfect compromise. The adults enjoyed some Sangria and the children were enthralled by the music and the dancers. My Little Little was so into it. He kept clapping along with the music and dancing. It was a perfect introduction for young kids.

You can enjoy this little clip to get a feel for the show. You won’t want to miss the quick stop at the Temple of Augustus in the Gothic quarter. These 2,000 year old Roman columns are now hidden between some buildings. It’s incredible to see these ancient ruins standing with the modern buildings. We were largely underwhelmed by Barcelona’s playgrounds and parks. We did enjoy the fountains and grass space in Parc de la Ciutadella. There were a lot of people hanging out and trying to sell things in the park, which I don’t love. However we were able to enjoy some time running around and on the sparse playground equipment. Since we were in Barcelona for the Holiday Season we had a chance to experience some of the special Holiday traditions. We walked through the Christmas Markets as we encountered them throughout the city. The largest one is in the Gothic Quarter. We noticed that most of the stands either sold pieces for a nativity or Christmas decorations. Christmas markets are one of my favorite thing to do in Europe and Barcelona did not disappoint. My largest regret was not tracking down the cone of churros I saw everyone munching on. We also had the chance to learn abut the Pooping Log, a Catalonian Holiday Tradition. This log is fed sweets from December 8th through the 24th. On Christmas Eve kids beat it with a stick. The next morning it will have pooped out gifts and sweets for everyone to enjoy. (Shortly after I posted our encounter with the Pooping Log on Facebook someone sent me this piece from NPR on the tradition.) Our boys became obsessed with this idea. We acquired our own little pooping log from one of the Christmas Markets to take home. Jeff really wanted to buy one because they’re made of cork wood, which grows in the region. So the log is a bit squishy to the touch. (It did in fact poop out a few gifts for the kids on Christmas Day!)

Barcelona has so many options for kids. Had it been a bit warmer we would have found ourselves at some of the larger parks or at the beach. Overall we felt we had a good introduction to the city.