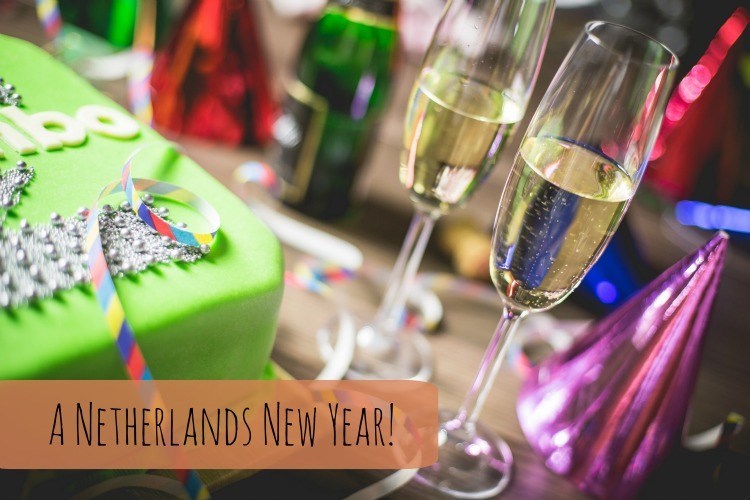 New Years in the Netherlands

Jeff and I have rung in the New Year in quite a few places. In Hawaii we watched lava flows instead of fireworks. We spent a random New Years in Canada at an Irish Pub near some glowing oil refineries. (It was more romantic than it sounds.) Last year we were in the middle of Rocky Mountain National Park in a quiet cabin with friends. Living on the West Coast of the U.S. we took to celebrating “New York New Years” at a reasonable hour. Then once we had kids we moved that to Noon Years Eve. Ha!

Our Netherlands New Year takes the cake for craziest.

We thought we would go into the Delft market center to see the fireworks, but by 4pm the sun was almost set and fireworks were going off everywhere. We decided that watching from home might be the best plan. At 6pm when we were sitting down for dinner, things were really starting to get crazy. The neighbors brought out their Christmas tree, put it in their front yard, stuffed it in a barrel and lit it on fire. The fireworks continued all around us. Neighbor kids started throwing firecrackers down the sewer grates. It sounded like we were under attack.

We bundled everyone up and headed up to our roof porch and watched the chaos from there. I had to put noise headphones on our little ones as real fireworks exploded directly overhead. The one-year-old was thrilled. The three-year-old not so much. I was shocked when we got them both to bed.

We saw a bonfire flaring up down the street and thought we might take a walk to check it out and greet the neighbors. I got a block from the house and immediately regretted my decision. Kids were throwing firecrackers everywhere, but kudos to the Dutch for putting safety glasses on their kids. Adults were setting off the big fireworks. I quickly retreated back to the house, my husband and a glass of bubbly on the roof.

Although we didn’t make it all the way to see the neighborhood tree bonfire my friend Karen lives in the next neighborhood over and snapped a picture of their bonfire. At some point the neighbor with the burning tree yelled out “Is it like this in the States?”

“Wait till midnight,” he yelled.

Jeff and I headed to bed but woke at 11:30 and headed back upstairs. Sure enough, at midnight fireworks erupted from every corner of the city. Everyone in the whole country appeared to be setting off fireworks and we could see them from every angle of our porch. IT WAS AMAZING. (See the YouTube video.)

Since we had not had enough crazy we decided to head to the beach at Scheveningen on New Years Day to run into the North Sea. (Sign up is day of and costs €3 which gets you a ticket to run, a hat and a can of pea soup. The tents are heated and have space to leave your towel and a change of clothing.)

My dad, Jeff and one of our Dutch friends suited up and ran down the beach and into the freezing cold North Sea to ring in the new year. The kids and I cheered from the sidelines and captured it all on this video. Scheveningen is the largest North Sea Dive location, but there are many more around the country. I almost forgot to mention the New Years treat – Oliebollen!  Yes (Megan) it does translate into Oily Balls. In reality they are delicious fried balls of dough. You can get them filled with cream, rolled in sugar or drizzled with chocolate. Free standing carts went up all over town starting in November for Sinterklass but they really hit their peak at New Years. I’ve eaten my fair share this year. Yummy!