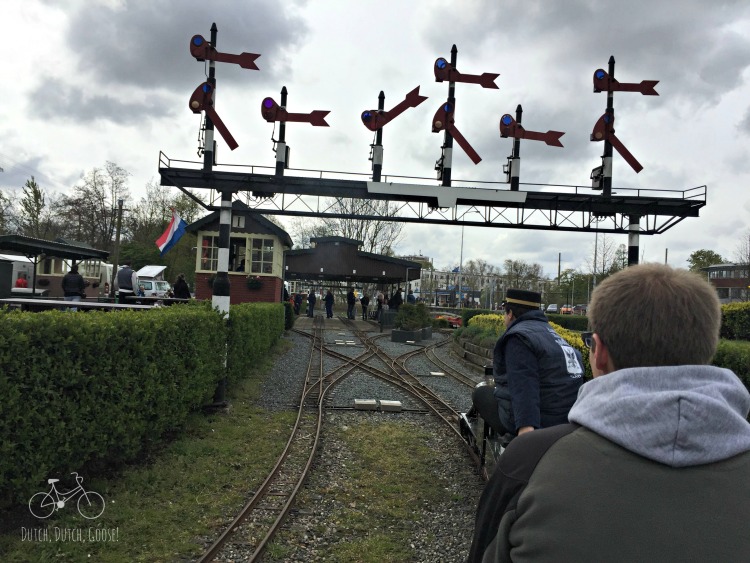 This morning we headed to Zuiderpark in Den Haag to check out International Steam Days.

This model railroad showcase is something to be seen due to its amazing location in Zuiderpark. The park hosts an incredible model train club that has railroad tracks in all sizes. The largest set of tracks holds trains capable of carrying passengers. €1 will buy you a ride on one of the trains (kids are: €0.80). On Steam Days the rides are “extended” into the park, but even a little ride around the track is thrilling. There is a real working switch house with crossings and many other trains out on the track. And let me be perfectly clear: these are 5-minute rides on miniature steam trains run on small pellets of coal. How cool! The smaller set of raised tracks also provided rides for those working on their trains. The children were amazed at the small trains pulling people around the raised track. There are also plenty of tracks for your more typical “model trains.” (Let me draw your attention to the guy working on his train and smoking, something you would never see in U.S. at a train festival. The smoking here is one of our few complaints!)  A few model boat enthusiasts even joined the fun, running an “agility” course in a small demonstration pond. The boys really could not get enough of the fun. You don’t have to wait for Steam Days to come around. The club is open every Wednesday from 1-4:30  and on Sundays from 11:30 -4:30 for the enjoyment of train lovers. (Sundays at 12:30 they run the long route through the entire park, including several street crossings.)

The rest of the park is worth exploring as well. We found three great playgrounds for the kids to enjoy, scattered around a perfectly appointed park. There are plenty of jogging trails and workout areas for adults as well. One of the playgrounds is built into the natural landscape . The boys loved playing in the wooden fort on the hill before clambering over the water features on rocks and logs to reach the tunnels that run through the hills. The more traditional playground had swings, a large sandbox, a slide and a large fort for play. It was crowded by mid-day. A bit further along is a huge climbing pirate ship. O stuck to the lower levels but H climbed his way into the mast and over the crows nest.

We packed a picnic and enjoyed it at one of the picnic tables that are throughout the park. It was a perfect spring afternoon outing. The park is easily reached by car or Tram 5. We parked at the large parking lot inside Zuiderpark, next to the model train club.