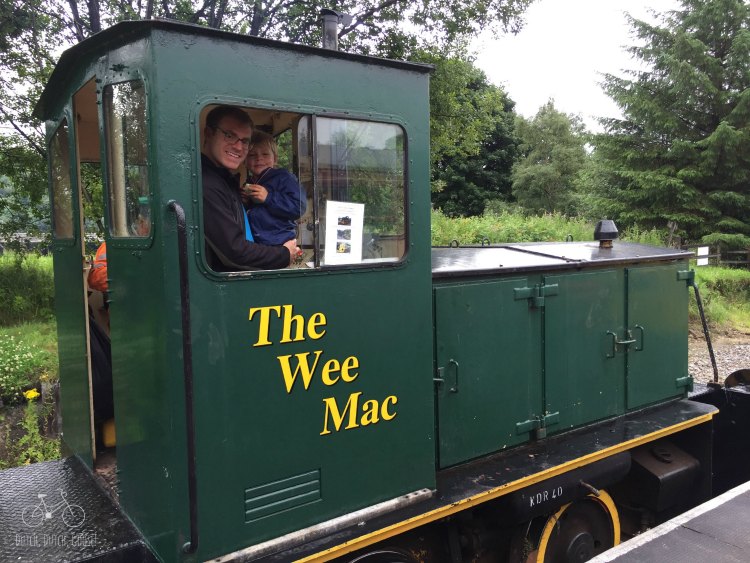 We arrived in Alford in the late afternoon and started the “train” portion of our journey. Our boys love trains, but we try to target smaller journeys as they also have short attention spans. This particular part of Scotland had two great train journeys for our kids. A better plan, if the timing works out, is to park in Alford and take the train to the park to play or picnic for a bit before taking it back. The train runs right through a golf course and adjacent to a sheep farm. The kids thought it was perfect and we were able to switch cars at the turn around point, and choosing a new seat is always fun. There is a little train playground at the train station as well as a kids room full of books in the station, so if you arrive early go on in. You pay for your tickets on the train. Our hotel, the Haughton Arms Hotel, is walking distance from the train station. It has plenty of parking in both the front and the back. The ground floor has a restaurant and bar. The bar has a beer garden out front that the kids loved running around in. The hotel has a family room on the top floor that was perfect. We had so much space, the beds were comfy and we had a great night’s sleep. The hotel does cook to order breakfast in the restaurant in the morning. The chef literally came out and asked what we wanted to eat. Jeff asked for a menu but the chef said, “anything.”

There are not many options for dinner in Alford, but The Alford Bistro was a huge win. We were able to get an early dinner reservation and the food was excellent. The only funny thing was that they sat the first five parties into the restaurant, including us, in the very back small room. It was so funny to have this small room full and the front of the restaurant empty. Since we are up early with the kids we were first to arrive at  Balvanie Castle. The lady running the castle was so sweet, she even let H take the giant key to open up the front door. He was in heaven! The castle was under a major reconstruction while we were visiting so several of the rooms were off limits, but there was still plenty to explore. Because of the restrictions, the ticket price was lowered. Our visit lasted about 45 min and when we left the parking lot was full. We were early to the train station which was perfect because they have a cute little restaurant in an old train car. I got a coffee to go, so that I wouldn’t be rushed, and we got a few scones to enjoy before boarding. The Keith and Dufftown Railway is known as “The Whisky Line.”  Most everyone else got off the train to tour a whisky distillery in Keith, however that is not an option with kids. We were informed that on a Sunday not much in Keith is open. We instead took the train roundtrip. We did hop out in Keith and enjoyed some of the messier items in our picnic lunch on the station grounds, we returned to the train for the ride back and enjoyed the view and our sandwiches. There is plenty for the kids to see on the ride and it turned out to be the perfect way to enjoy a rainy day. There are English guides available in addition to a conductor who passes through the train to answer any questions you may have. The real treat came when we arrived back in Dufftown. The volunteer railroad operators offered to let us drive the shunter for 10 GBP! We jumped at the chance to let H drive a train. The whole family rode along with him, but he was in control of the brake and speed. The engineer gave him a full briefing (and had his own set of controls) and then let H do much of the work. Little O got to blow the horn a few times too! (If you want to see a four year old drive a train, check out our videos here and here.) If that were not cool enough the boys each got a certificate signed by the Engineer and the Station Master confirming them as certified train drivers! The kids both instantly fell asleep when we got back into the car. I assume they were both dreaming of trains! Jeff and I decided to pull off the road a few times to investigate some interesting sights such as whisky barrels piled outside of a cooperage and a few other brown historical signs that led us down small roads to old rock formations and cemeteries. It was a nice way to break up the journey as we headed to Loch Ness.

Visit Scotland provided us with an AVSA press pass waiving admission at some attractions in exchange for this review. All opinions are our own.