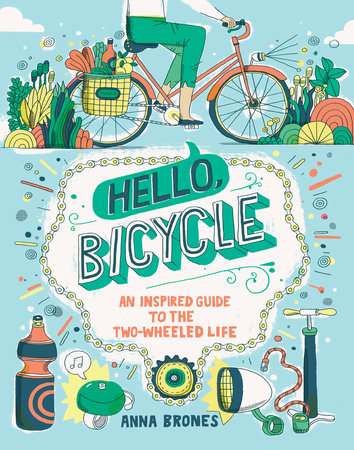 I never thought I would be someone who was obsessed with bikes. . .but, then we moved to the Netherlands. My anniversary gift, two days after we moved to Delft, was a new bicycle. In late November I received another bicycle, a cargo bike, as an early Christmas gift. Our bike fleet at the house grew from two bikes to eight as we added bikes for guests, children’s bikes and push bikes. Recently our oldest has had his training wheels removed! I’ve even become obsessed with all bike accessories from kids seats to panniers.

A year into this crazy expat adventure I love my bikes but I really know nothing about them. I’ve been lucky that most of the bike maintenance issues have been with my husband’s bike. When I found Hello, Bicycle: An Inspired Guide to the Two Wheeled Life I had to check it out. This book bills itself as a practical guide to bike ownership, a handbook of sorts for bike owners at all stages in their bike obsession.

Hello, Bicycle is a quick, fun read about all things bicycle. Anna Brones starts out by telling the reader why biking is so amazing. If I had not already been obsessed with biking it would have been enough to get me outside to give bicycling another chance.

Personally, Chapter 3 “Taking Care of your Bicycle” and Chapter 5 “Essential Provisions” were where the book became a reference manual for me.  Anna gives easy to follow instructions on bike maintenance tasks as simple as cleaning your bike or changing a flat. She encourages you to find a local bike shop you can trust for more intense maintenance. She also provides a list of what commuter bikers, like me, should be checking each month and how to do it!

The book is very approachable and dare I say “girly” as it is full of fun pull-out lists from bicycle terms to myths about bicycling. My beloved “cargobike” even gets a full page and a half toward the end of the book, so that’s a win!

For those interested in bicycle nutrition, the author included some recipes in Chapter 5 that are sure to get your taste buds turning. I think the handy bike foods (granola bars and breakfast goodies, mostly) are a really clever addition to the book. This section made me feel like this book is the whole package – a great book to buy as a gift for a friend.

In summation, this is a great book for anyone who loves or wants to ride their bike casually. It may be too simple for someone already heavily immersed in bike culture. It’s a book I will keep on the shelf as a reference because it’s cute and about something that has become such a part of my life!

I received this book for free from Blogging for Books in exchange for this review. All opinions are my own.