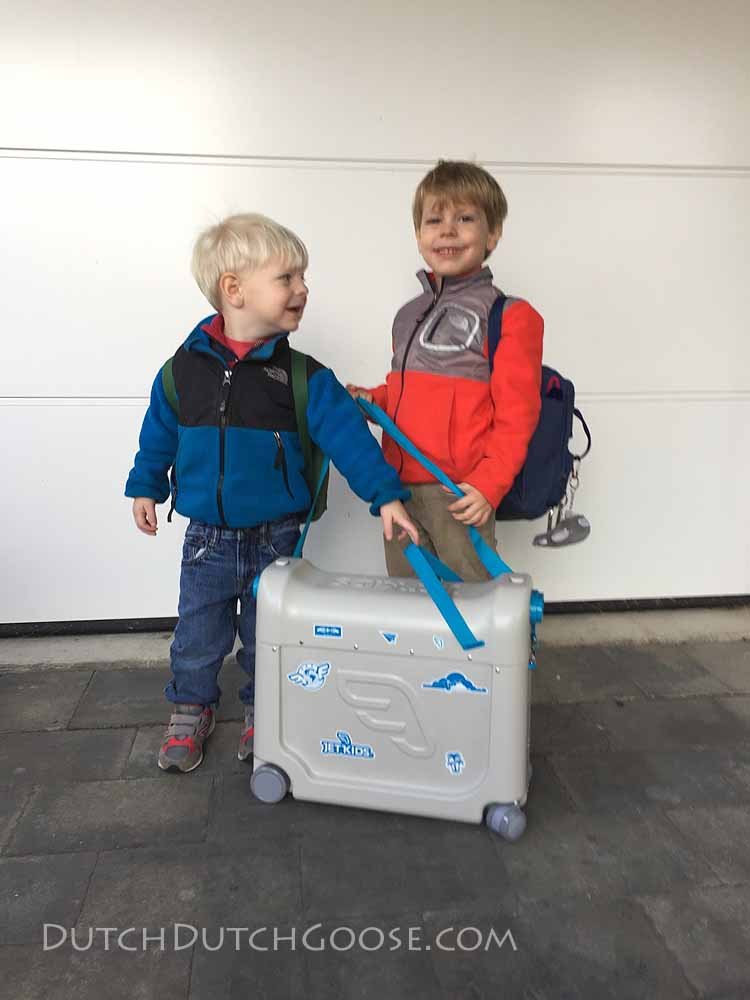 Bed Box from JetKids combines a ride-on suitcase with an in-flight leg rest all in one lightweight package. We fly a lot and I’m always looking for ways to make the most out of the limited space we have. I’m clearly not the only one worrying about this, as discussion of how to make your kids comfortable on the BeBe Voyage boards is always full of suggestions.

On our most recent flight to Portugal we gave the Bed Box from JetKids a try. The big question was, would it provide enough advantage to justify taking an extra piece of luggage with us on the trip? The JetKids arrived packaged up as cute as could be. My kids were so excited to unbox it and take a look. It comes completely assembled. We did play around with it a bit at home just so I could familiarize myself with how it works. It also comes with stickers so your little ones can decorate the box themselves. My kids had a blast decorating the box. I got involved a bit in order to keep it looking nice, but I’m a micromanager like that. There are three pieces with the JetKids Bed Box: the box, the lid and the mattress. The lid flips over in flight to become the bed frame. The mattress takes up about half the box so there is some space left to store a few items for the kids. My largest concern for the JetKids bed box was if it would be a hassle to tote around when we were on the ground. I knew once we got in the air I was likely to like its functionality. We typically take the train to the airport. The four year old was easily able to pull the box behind him while carrying his backpack. We had stuffed a few little things in the box as well to take advantage of the extra space. The hooks on the sides of the JetKids allow you to change the strap from a pull behind to a shoulder carry. Our four year old was able to make this change so that once we boarded the train we could carry it for him until it was convenient to roll again. The clips are quite tight, so I had trouble trying to change the straps quickly. Once we got to the airport the JetKids became a ride-on for the oldest. He loved this and so did we. The extra thing we were carrying around was a great way to keep him from complaining about walking. It even served as entertainment for him. He loved riding it on his own and when space allowed, he enjoyed “doing tricks.” As groups approached he was easily able to rejoin us and hook back up. We even slid the handle over the stroller handle so that I could test out walking with all three kids without assistance. It worked out great. Our two year old also took some rides on it but needed to be towed and was a much less reliable rider. The person pulling really had to pay attention to him on the box. There is a little strap on the front for the rider to hold on to while being pulled that really helped him hang on. Once on board the JetKids stowed under the seat in front of us without trouble. It was impossible to access the inside of the box without pulling the whole box out, so keep that in mind when you are getting settled.

The bed rest portion can only be used during the “cruise” portion of the flight. These are the same regulations that govern the use of similar products and things like the airline provided bassinet. You may be asked to stop using the bed rest during extreme turbulence. It is always up to the crew to determine if and when it can be used. Once we were at our cruising altitude we easily set up the Bed Box. I lifted the lid to remove the mattress. I flipped the lid and clicked it to the right height. I also used the strap to connect the box itself to the seat in front of us. This prevented it from rolling or shifting. In order to install the mattress I did have to have my two year old get up. It rolled out easily and he sat back down. I fastened his seatbelt, gave him the iPad and he stretched out for the remainder of the flight. The big advantage for us was being able to lay the baby down with the two year old. Using this unusable space to be able to set down the lap infant freed us up quite a bit. I was actually able to read a book while the baby slept and the big boys were on the iPads. We were disappointed with the side flaps on the mattress because they Velcro into place and we tried them both against the arm rest, as well as down by the tray table. I could prop them upright but they always ended up flopping over. I think we may just leave them behind next time.

The tray table is still usable when the Bed Box is in use. We actually put the tray table down over the sleeping baby for a bit to help us with the bathroom shuffle. Without the baby there the two year old was able to put the iPad up on the try table and lay back and watch with his legs underneath the tray table.

We had no trouble packing the Bed Box up for landing. We were able to offload it quickly and get the kids back on to it to make our way through the airport. It was also fun for the boys to play with while we waited for luggage and the rental car. It easily stored in the trunk of the rental car and later in the closet of the hotel waiting to be used on the return flight. What I can say with 100% certainty is that using that space between your seat and the one in front is so nice on a flight. It creates more room and prevents toys from falling. We loved how the bed was also a ride-on which is fun for the kids. We wish there was more internal volume in the suitcase not taken up by the mattress, but there just isn’t. We will likely get better at packing this free space as we go.

In the future, this will be accompanying us on longer flights whenever we have the space.

We received this product in return for an honest review. All opinions are our own and our review is based upon our experience using the product.