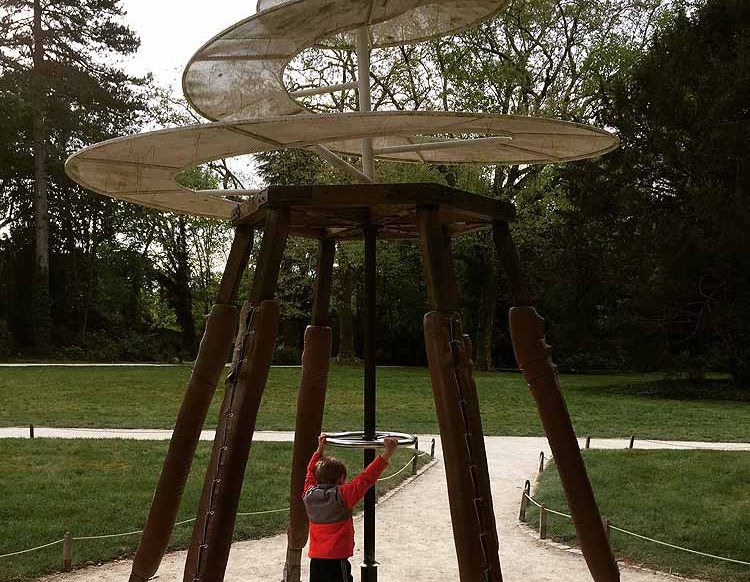 As part of our France Passion RV road trip, we ended up at Chateau de Nitray for our overnight. We were looking forward to touring the property and tasting some of the wines. When we arrived, we could’t find anyone in the Chateau. We walked around a bit and left a note, as is the custom for France Passion. It was pretty clear that we were to park in the back lawn, and when we pulled back there we found another RV there for the night. The sign seemed to indicate that they were open. We spread our our blanket and made our dinner. The boys played in the fields until it got dark. Every half hour or so, Jeff would run across the street to check if someone was at the vineyard, mostly because we really wanted to pick up some of the wine! We never found anyone though. We did enjoy a wonderful night out in the fields. The two Bigs fell asleep almost right away, but the Little Little was up quite a bit enjoying the evening air. The next morning we were up early to make the push to Clos Luce Parc, a house once occupied by Leonardo De Vinci and now dedicated to his work. Jeff and I had been here when I was pregnant with our Big Little and were excited to bring the little ones along.

The ride through the town in our RV was harrowing! We made a few turns that took us down some narrow roads, but eventually we ended up in the Clos Luce parking lot. Had we not arrived early we would not have had parking. Also, when we came back to our RV, people had parked every which way, making it very difficult to get the RV out of the space. Had we known we would have parked in a way that would make it easer to get out…with our nose in the exit! Knowing that bad weather was on its way, we skipped the indoor stuff and went right out into the gardens. We had them to ourselves while the weather was good. Many of Leonardo’s inventions are built in full scale in the garden and available for the kids to play on. The kids loved trying out the tank and spinning around. The kids were endlessly entertained by these inventions. Meanwhile, we were able to listen to the audio information which plays in several languages. There is also a great playground for bigger kids. Our Middle Little did become trapped in one of the towers when he couldn’t climb back down the ladder easily, but regardless both kids enjoyed the visit. When the rain set in hard, we headed inside and toured the house. The line seems really long but tour groups impede movement; once you get around a group, you will have plenty of room to explore. There were a few rooms the kids loved. The basement is full of models of Leonardo’s inventions, but you  are not suppose to touch them, so it was not ideal for the kids.

We also popped into the creperie to get a bite to eat. The inside is quite small: they depend on nice weather and outdoor seating. Despite being cramped, the food was good and they had children’s menus with activities to entertain the kids.

There is an app to download to help with your visit of  Clos De Luc. We did not do this as we had been before and were more focused on the kids getting some exploration time. The rain was really coming down when we left. Jeff found a lovely looking campground in neighboring Amboise. They dropped me off in town to get some groceries before all the stores closed for the labor day holiday. Meanwhile, they continued to the campground to get registered. The local campground is the perfect location for these adventures. We could have even parked here and biked to Leonardo’s garden. We enjoyed a rainy afternoon in our RV. The downtime was much needed. The boys watched a movie on the iPad, while Jeff and I had time for reading and planning. We took advantage of laundry facilities at the campground to get some laundry done. (The machine broke with our clothing in it and we had to ask for additional drying coins as our stuff was sopping!) When the rain let up a bit we walked into town for dinner. There are many restaurants in Ambrose that all look equally as touristy. We ended up at Restaurant Anne De Bretaga and had a great meal. We even ordered a desert crepe to share as a family! We walked back along the river and stopped to check out some of the statues. The next morning the onsite bakery sold out of goods immediately. Jeff was there a few minutes before it opened but they wouldn’t let him in. He went to check on the laundry and before he got back, they were all sold out! Instead, we hit the playground at the campground for a bit and then pressed on to our next stop. The Ambrose campground was a huge win. I think this is a great stop if you’re in an RV. The facilities are great and being able to walk into town adds so much value to the parking spot!