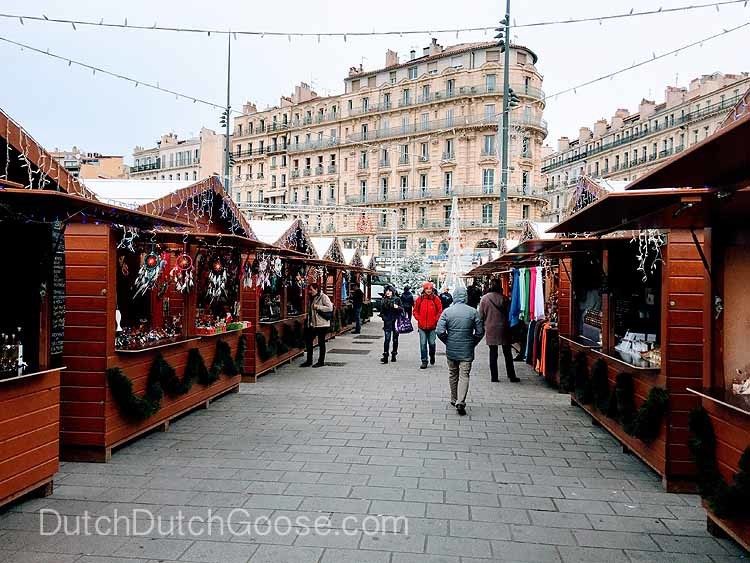 Marseille, France was the last stop for us on our MSC cruise through the Mediterranean. Marseille is France’s oldest city and second largest. It has lots to offer. It was far less touristy than other stops and we felt at home with stores we recognized. It’s not shiny like the other stops. In fact, it’s a pretty gritty city but it offers plenty of diversions to explore. We mostly spent time dodging the rain and leisurely following the Rick Steves Walking Tour.

The boat dock is well outside of the city center. My parents and sister bought tickets on the MSC transfer bus into the city. A taxi to the city center ended up being cheaper for our family. The driver dropped us off right on the waterfront of the old port. There are tons of small boats moored here and it is incredibly picturesque. This used to be the main port but it is not revived as a tourist center of sorts with the cruise and port traffic moved to the new port a bit outside the city. There is a taxi stand here and this is also the best place to pick up a cab heading back. The kids were immediately attracted to the Mirror Roof that stands on the Old Port. We let them lay on the ground and look up at themselves and got an obligatory selfie standing under the roof. The fishing boats were still there selling their catch of the day. The boys always love seeing the live catch and plenty of locals were there buying the fish. The fish market is set up on the east side of the old port every morning. Local restaurateurs are said to pick up everything they need here for the local bouillabaisse. Standing at the fish market the city feels quintessentially Mediterranean. The Christmas Market was still set up and just opening as we arrived. We visited many Christmas Markets in Europe but this one had many more hand crafted stalls, so it was fun to browse. As the first visitors of the day to many of the stalls they were all handing out samples and were eager to chat. The candied fruit and vegetable lady was so charming so we purchased a bunch to try. She kept throwing in other freebies for being her first customer of the day. We also found stall upon stall of tiny figures for the elaborate nativities we had been seeing throughout the Mediterranean. Across the street a church was hosting a large nativity scene. We popped in to check it out. The boys love how detailed these scenes are. You can always find elements of the local culture in them. A few blocks further and we found a carousel. As usual, we were happy to let the boys take a ride. This was the longest carousel ride ever though. When it finally ended the kids were actually ready to get off and my parents had walked miles ahead of us! We headed into the city following the Rick Steves’ tour. We visited the bustling Marche Capucins (the African market) with its collection of African spices and food. We made an error by not grabbing food here. Everything smelled delicious,  but I was quite overwhelmed by the sheer mass of people doing business here. Next we headed up the hill to the MuCEM. The MuCEM complex is made up of several buildings and attractions including a fort. We did little more than pass through them. We crossed the footbridge over into Fort Saint-Jean and walked its ramparts. You don’t have to pay for this walk but an entrance fee is required to see any of the exhibits. We crossed a second bridge that brings you to the newer buildings of MuCEM that sit on the J4 Pier. Just in the nick of time we spotted a modern playground on the pier. This was the perfect place for the littles to run off some energy. We stayed here until the skies opened up and then we made a break for the Marseille Cathedral. Inside we poked around until the rain let up.

We walked a bit through the old town enjoying the quieter, narrower streets lined with colorful buildings. There are several walking tours that spend time just in this area that I would love to come back and try. (See a complete list of walking tours here.) There are so many great murals here I would love to have a chance to enjoy them. We were trying to avoid getting soaked though so we didn’t give this area the time it deserved. Our final stop was the incredible Centre de la Vieille Charite. It was built as an almshouse to house the poor and homeless in the city. The building in the center served as a chapel. It is now a museum space. We did not venture into the exhibits, because…well…kids. We did however enjoy walking around this stunning building. We had to walk around a bit to find a cab back to the port. We were wet and tired. Although there was much left to do in Marseille we went back for some downtime on the boat. On our search for a cab though we passed many cute stores and areas worth exploring.

My parents and sister took advantage of the time in port and visited the Basilique Notre-Dame de la Garde. They reported back that the city views were stunning. We also heard wonderful things about boat tours and hikes at Calanques National Park, just 15km from the city.

We are actually headed back to Marseille in late February as a gateway to Provence. We won’t be spending time in the city, but we certainly could find more to do here. I don’t think I would headquarter myself in Marseille but it’s worth a day trip or overnight if you are in the area.