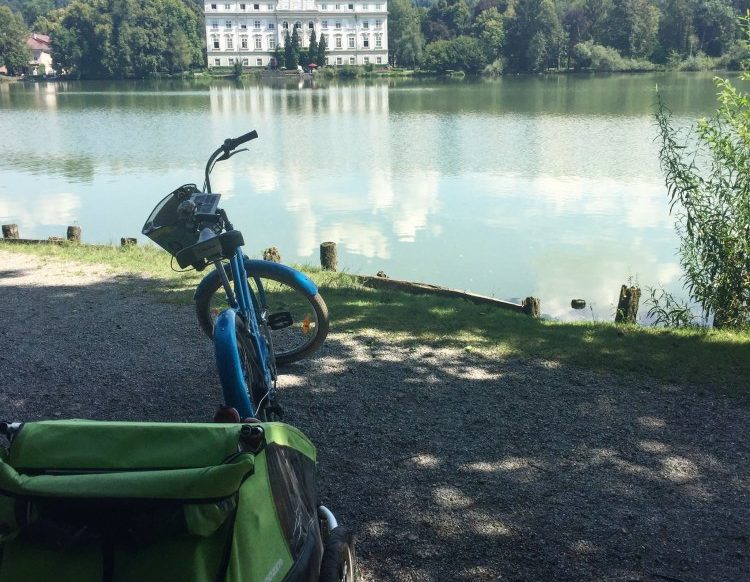 When I was little, I checked out “The Sound of Music” movie so many times from the library that for Christmas that year I found my own copy under the tree. The magic of The Sound of Music stayed with me and I’ve already forced the boys to watch the movie quite a few times. Therefore, when a recent driving trip took us near Salzburg, we stopped for the express purpose of taking the Fraulein Maria Bicycle Tour.

What you need to know.

If you plan to take this tour make your reservation now. The tours fill up as they are very popular!

The plan was for the whole group (two seniors, two adults and three kids) to go on the tour. Fraulein Maria offers tow behinds, ride behinds and kids bikes in addition to their normal bikes. We scheduled one tow behind trailer and one ride behind for the Big Little. Unfortunately, as we were getting on the bike the Big Little, who had a headache, threw up and we decided to have Jeff take him back to the hotel to sleep. Instead, my parents and I took the two littles in the trailer.

Our summer tour picked up in the center of town. You start by getting fitted on a bike. Each bike has a name, I ended up on Gretl – perfection.

Each bike has a basket to stow your stuff and a flipboard of film sights from each stop. I highly recommend you bring a water bottle. We were there in the height of the summer and it was H-O-T! We drained all the water we brought multiple times. We had some extra room in the tow-behind trailer as well. I packed a ton of snacks and water for the kids to enjoy in the trailer.

The tour has lots of stops where you get off the bike and get up close with the location. I didn’t want to get the kids out at each location, so I just kept the trailer open so they could see and listen without getting out. The guides are knowledgeable and funny, so even the kids were entertained.

When you are not stopped at a sight a portable speaker turns the ride into a sing along.

I ride my bike most days and still found two of the hills on the ride quite challenging. I ended up needing help getting the bike and trailer up one of them! (I think I would have made it on my own but gladly took the help when offered.) The city was also quite crowded and I nearly took out a few other people with the tow-behind. Sorry!!

What you will see.

There are so many stops and small tidbits on this tour, I haven’t captured them all. This is a highlight of some of the more famous places to give you an idea of how close you get to many of your favorite spots.

Built in 714, the Nonnberg Abbey is not only the setting in the movie, but also where the real Maria started her adventure. Clinging to the gate and asking to see Maria is a must!

Don’t leave this spot without catching a view back over the city! It is stunning and makes the uphill pedal worth it!

You can march up to this fountain just like Maria and splash the fountain. (Just make sure you face the right way when you take your fountain photos, unlike me who faced in the completely wrong direction!)

The Rock Riding School is a former quarry. It was created while building the cathedral and was transformed into a unique riding school and later converted into a theater. When we were there a music festival was holding concerts at the venue.

It was hot and crowded on the day of our visit so we didn’t go jumping around, but this is where Maria and the children run on the ring of the fountain and jump on the stairs. It is a must visit in Salzburg even if you are not a Sound of Music fan.

Frohnburg Palace was used as the front of the von Trapp House. On bike you can pull right up to the gate and check it all out for yourself. The house is now a student residence for the music university.

Pivot just a bit from the house and you are on Hellbrunner Alley, where Maria skips along on her way to the von Trapp house for the first time.

This was our second visit to the Gazebo, as it sits in the Hellbrunn Gardens now. We caught a glimpse while taking the trick fountain tour – which is a must! You can no longer skip around the benches, thanks to a few too many falls, but it is still magical to visit in person.

The flower garden here was just so beautiful that I had to wander over and check it out again!

The von Trapp’s backyard, lake, balcony and garden. You can actually stay overnight in the building now as it is owned by the Salzburg Global Seminar and run as a hotel and event space.

The cemetery lies behind the oldest church in the city. There was no actual filming here, but it was the inspiration for the cemetery scene in the movie. As it is in the middle of the city, you can only reach this place on foot. We parked the bikes in a square out front and walked in. We enjoyed this stop so much we actually came back after the tour to explore a bit more.

I’ll leave you with another little gem of sing along time from our journey! I highly encourage you to check out this tour if you’re going to be in Salzburg. It was family friendly and so much fun. There is nothing better than seeing a city by bike!