Elizabeth Newcamp is a Florida-based homeschooling mother of three boys (ages 7, 5 and 3). She is the co-host of Slate's Parenting Podcast Mom And Dad Are Fighting. 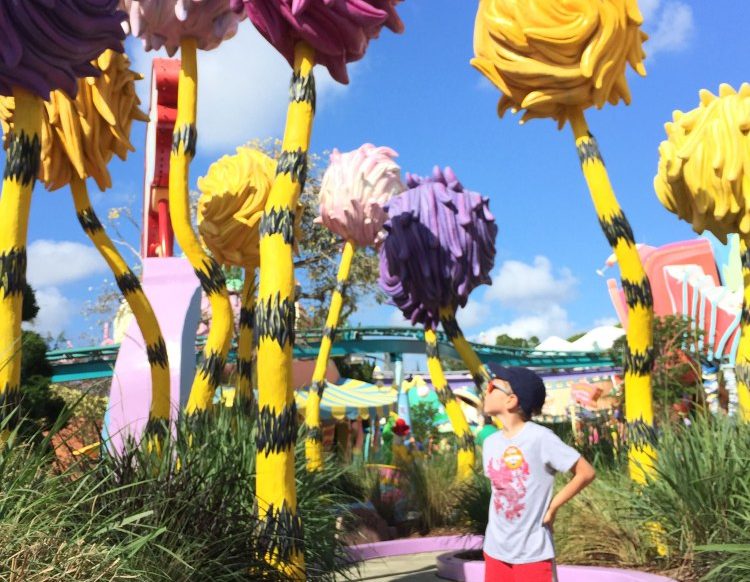 One Day Visit to Universal Studios & Islands of Adventure with Kids

We spent one day at Universal Studios & Islands of Adventure in Orlando with the sole intent of doing The Wizarding World of Harry Potter. When that took far less time than anticipated I persuaded my Big Little (7) to take a loop around both Universal Orlando parks to find some other fun.

I was nervous about visiting the two Universal parks because neither the Big Little nor I are big roller-coaster fans. Yet, we still found plenty to enjoy. While he mostly wanted to hang out in the Wizarding World, even after trying some of the other rides, we had a great time trying out some of the other things the park has to offer.

After The Wizarding World of Harry Potter, Dr. Seuss land was our biggest win. The few rides here were all kid friendly. The Big Little recognized all the characters and really enjoyed exploring this land.

We kept getting lost in the Truffula Trees on our way to the carousel.

Hidden in the maze is a playground complete with a little water play area. It is perfect on hot days with little kids.

We also caught a few meet and greets in this area, which my Big Little always enjoys.

This playground, full of oversized everyday objects, makes kids feel like mice. It was the perfect place to run around and play. We also sought refuge from a passing rain cloud under a large book. There is also a 200ft long waterslide!

This was probably his favorite ride outside of the Wizarding World, which I know is super weird. As you wait in line there are tons of interactive games to play. The ride itself involves 3D glasses and a large auditorium with motion simulation technology. You are not actually moving much, so it is easy for a non rolle- coaster rider like me to stomach.

The lovely woman in the Amex Lounge at Universal Studios gave us skip the line passes for this ride, so we didn’t have to wait at all. The ride is similar to Jimmy Fallon as it uses motion simulation. You are accidentally transformed into a minion and find yourself in trouble in Gru’s warehouse. We both found it fun to ride. The seven year old is a huge Minion’s fan so he was all in.

This is like a funny little 4-D movie where things appear to be flying at you while you get pelted with water and air and bounced in your seat. The theme is a little dark as you enter into the prince’s dungeon, but it’s a light, humorous take with a happy ending.

This fun log flume ride is one of my favorites. I had to coach the Big Little a bit because he was terrified of the fall at the end, however he was laughing the whole ride! The drop at the end is a bit dramatic and you are guaranteed to get wet. There are lockers for rent as you enter the ride. We just covered our bag with a reusable plastic bag and our stuff stayed dry while we were wet.

One of the Big Little’s favorite things was watching the Full Beat Builders. These guys play music on a variety of construction equipment. They toss sticks into the air and climb up on scaffolding. It is highly entertaining and in our opinion not to be missed. It had the Big Little drumming on everything in sight for days.

There were a number of rides at the parks that the Big Little was tall enough for and seemed tame but ended up being a big miss.

I absolutely should have known better but it is the same 3D motion simulator that the Big Little had been enjoying. The themes were a bit dark for what he is used to. (Krusty the Clown is trying to kill the Simpson family and you are escaping.) The ride itself is pretty jerky and was just not a big win for us.

This ride was unfortunately down for most of the day so although we walked over twice to check it out we didn’t end up riding it.

I really thought the Big Little would like this ride, but he cried through most of it. When the T. Rex jumps at you and you crash down the waterfall he lost his mind – oops. haha. He was also hungry and a snack fixed the tears but be warned.

This is the only thing we waited for all day. We waited about 35 min and then we just decided to leave the line. I suspect the load time is rather large as the line moves very very slowly.

Harry Potter was really enough to justify the visit to Universal. The rest of the park is just not really for us – too many large roller coaster rides vs. smaller tame themed rides. We had a great time though and glad we checked out a few other rides around the park.