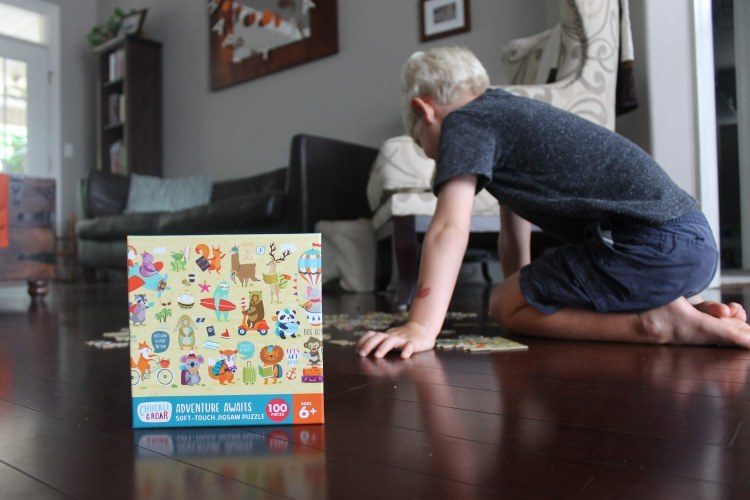 You may have noticed the new game section at Target stocked with beautiful games and puzzles from Chuckle & Roar. I was completely sucked in by the new games that looked fun, looked easy to understand, and looked like they would work for all my littles. Then I looked at the price and realized they were all affordable too!

This is a sponsored post by Chuckle & Roar. All opinions are my own, based on my personal experience. I went to Target to choose and purchase the products that are reviewed here. There are affiliate links in this post. To learn how affiliate links work you can see my disclosure policy at the bottom of the page.

We picked a few Chuckle & Roar products off the shelf and gave them a try. Overall, I found the Chuckle & Roar games enjoyable to play with the kids. (There is nothing more annoying than the kids wanting to play a game that makes me crazy). The games were able to be enjoyed by all three of my littles (ages 7, 5 & 3) and focused on concepts we are working on for school.

We picked up some Puzzles, Card Games, Board Games and Car Games. Here is a run-down of what we chose, how we used them and what to expect.

My Middle Little is obsessed with puzzles. He loves putting them together, so one of the Chuckle & Roar 100 piece puzzles was the first thing I pulled off the shelf. Honestly, it was hard to choose just one puzzle!

I knew he would love the cute animals doing funny things! The box says it’s for ages 6+, but my Middle Little (5) loves 100 piece puzzles and was able to put this together on his own.

We use an afternoon rotation to manage our quiet time. Puzzles are a great way to get my little ones who don’t read on their own yet to complete an activity quietly.

Sure enough the five-year-old used his time to put together the puzzle while listening to some quiet music.

When he was done I found him talking to himself about all the animals on the box and making up funny stories. I may use this puzzle for a writing prompt for the older one!

Chuckle & Roar makes puzzles for all ages. If we didn’t already own something similar I would have picked up the 2 pack of raised numbers and letters for my Little Little, because it has so many uses as blocks and as a puzzle. The three and four letter spelling puzzles look perfect for a morning basket! The 4 pack of Jigsaw puzzles has puzzles that are 48, 72 and 100 pieces all in the same box!

A card holder has been on our need list since we started family game night. When I saw that Chuckle & Roar made a card holder I knew I had to have it. Not only does this help the kids manage their cards, it also sits on the table so the kids don’t have to hold all their cards. The card holder has completely solved the frustration (from the littles and myself) that comes from cards ending up everywhere during game nights. Also, the Big Little (7) can now organize his cards, making his game play even better, and thus more fun when he plays with adults. The card holders can hold a ton of cards. The cards in the photo above are Chuckle & Roar’s jumbo cards.

A simple deck of cards is a gateway into family fun. Chuckle & Roar’s Jumbo Deck of Cards is so much easier for kids to handle and enjoy. The illustrations are fun, drawing kids in. Since they are larger all three Littles can see the numbers and suits on the corner with ease. The cards have expanded our card playing options with the boys.

I’ve been throwing the Jumbo Cards and card holders into my bag for family time on the go. While waiting for pizza on a recent trip we pulled them out and taught the Middle and Big littles a new card game. (Find a fun list of card games for kids on The Spruce.) The Jumbo Card deck also comes with a few instructions for games. I also love using a deck of cards as flash cards. We pull two cards and have the Middle Little add them while the Big Little multiplies them! At around $3 these Jumbo Cards are a perfect small gift for any kiddo in your life. Maybe try them as a stocking stuffer this Christmas.

We love playing board games as a family. Family game night is a weekly thing and I love to incorporate games into our homeschool day. I love that the Chuckle & Roar games are simple to understand, so it doesn’t take us very long to learn a new game. They are also all in small packages, making them easy to take along on a trip.

The concept of Scoop Up is simple, you have to stack 10 ice creams on your cone, but each one has to have a number greater than the number under it. Sometimes we play with the ice creams laid out, so the kids are challenged to remember where numbers are, and other times we mix it all up so no one knows what they are picking up.

You take turns picking up an ice cream and deciding if you want to stack it or put it back.

You need 10 scoops to win and the numbers only go up to 49, so there is some strategy involved too.

The box says 6+ but my five-year-old can play the game and it’s great for number recognition.

You can also use Scoop Up to work on number recognition and skip counting. We flip all the ice creams over so you can see the numbers and take turns stacking the ice creams in sequence by 2’s, 7’s or any number you are working on.

The Little Little (3) and I pull numbers and practice saying them. It’s a fun way to work on counting!

The fun of Red Light, Green Light happens as soon as you open the box. The first thing you get to do is decorate your own cars. Each of my three picked a car and went to work setting it up just as they like. Jeff and I were left to decorate the fourth car. Such a fun touch!

The game board snaps together to form a road and each player gets to place one cone in one lane in one section of the board. (The boys like setting up the game as much as they like playing!)

Red Light, Green Light teaches counting and impulse control. You draw cards to determine how many spaces you move, but you get to choose how many you draw. If at any point you draw a red light your turn is over and you don’t get to move at all. The first few games we watched the five-year-old draw card after card and cry when the red card came up. After playing a few times though he is learning to not press his luck too much!

The package says this game is for 4+, but we usually include the Little Little (3) in this game. He is able to draw the cards and decide when he wants to stop, but we help him with moving the piece the proper number of spaces.

The game includes a modification for playing with older kids. You can add in construction cards (included) allowing you to move the cones to make it harder on other players. My Big Little (7) loves to play this way. He once got lucky enough to draw three cones and completely boxed me in!

Chuckle & Roar also has some travel games that look perfect for traveling families like ours. (These were all sold out the day we went to Target, but I would be remiss not to mention them.)

Mega Maze has 50 dry erase mazes in a convenient carrying case that doubles as a surface to complete the mazes. The package comes with 3 difficulty levels, so it can be shared by the whole family. Best of all it’s an independent activity.

The Kids Scavenger Hunt has three decks of cards with items for your kids to find. One deck is for home, one is for outside and one is for the car. I actually carry around a set of homemade “find it” cards in my purse for waiting with the kids, so I think this is a great idea. If you get these cards I suggest placing them on a binder ring so you can throw the outdoor set in your bag and keep the car set in your car.

The Travel Bingo Set also caught my eye. The boys love playing car games together and the Chuckle and Roar set allows you to swap out the cards. You can use the alphabet cards to play in a restaurant or while waiting at a doctors office.

The Magnetic Foam Tangrams also looks perfect for travel. (One of the littles may find these in his stocking!) Tangrams are something the boys love. We have a tablet game and also a set in the morning basket. These magnetic ones are small and can be played inside the tin, making them great for on-the-go times.

We were thoroughly impressed with the quality of the Chuckle & Roar products. Most of their product line is under $10! They have quickly become our go-to for gifts because of their great value.

This post was sponsored by Chuckle & Roar. All opinions are my own. Some links contain affiliate links. If you make a purchase through one of these links, Dutch, Dutch, Goose! receives a small payment at no cost to you. We appreciate your continued support.