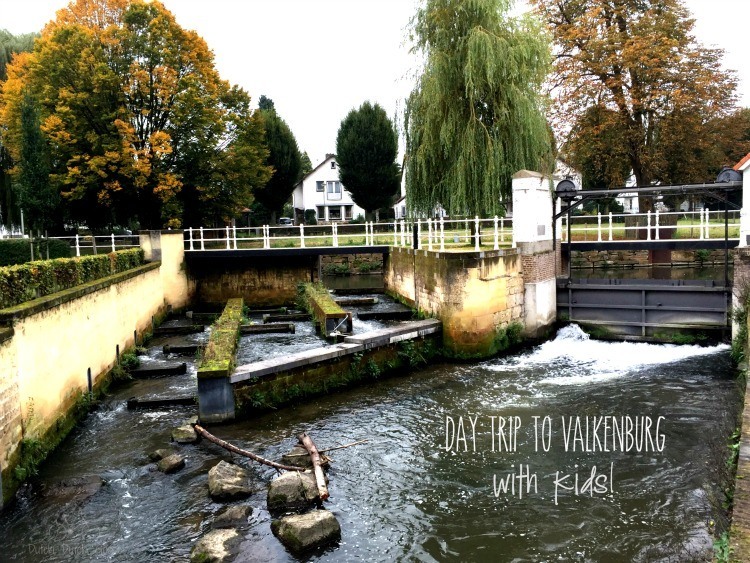 It seems that every town we find our way to these days is cuter than the last! Jeff once again had some work in the southern part of the Netherlands. We booked two nights at the TownHouse Hotel in Maastricht. (Read our review here.) This trip we had two days to spend in the area so we decided to check out Valkenburg. Valkenburg is a great tourist town. There is plenty to do, ample restaurants and the town is easily walkable. We drove from Deflt (~2 hours) and arrived a bit before 11am. (You could also very easily take the train. Valkenburg is home to the oldest train station in the Netherlands.) We found parking in one of the all-day pay lots just outside of the city.  The pay terminals are easy to use but you will need coins. Alpine slide in the background.

Our first stop was the Alpine Slide. It appeared that you could drive to the top, but this was well beyond our navigational ability. Instead, having parked our car in town, we paid to take the chair lift up to the top. The chair lift was €4.50 for the adults, €2.50 for H, and O rode for free. Our family of four rode the slide for €8, which included two runs, one down each of the slides.  I teamed up with H, while Jeff and O braved the slide together. The kids had a blast! We spent a bit of time on the playground, though the wind on the top of the mountain made it quite nippy. We needed to grab a quick lunch so we found a bakery in Valkenburg’s main square, just across from the TI. We grabbed some cheese pinwheels, — and sat on a bench to eat. We had 1pm tour reservations at the Romeinse Katakomben, which are complete replicas of 14 of the Roman Catacombs built into an old marlstone mine with unbelievable attention to detail. These were built by a wealthy Dutch family in 1910-1912. They are only replicas and were never actually used as burial sites. Interestingly the caves architect, Pierre Cuypers, was also the architect of the Castle in Utrecht we visited last week, as well as Amsterdam’s Central Station and the Rijksmuseum in Amsterdam. Everyone on the tour was given a candle to light the way through the caves. The only downside to this tour was that it was given in Dutch. The tour guide spoke English so between rooms she was able to fill us in on what she had been talking about. It was incredibly interesting, but the children lost interest at the hour point and we basically ended up playing flashlight games on the wall. Painting detail in one of the catacomb rooms. Inscriptions inside the Catacobs are exact replicas of those found in Rome.

The walk back into town from the Catacombs takes you past the Valkenburg Prehistoric Flint Mines. These mines were used in the Neolithic Age for mining flit to make tools. They are exposed due to erosion and the building of the present-day road. This is why Europe continues to amaze me – Neolithic mines!! Parks around town also have entrances to the mines that have been sealed off.

A bit farther into town is the Valkenburg Lourdes Grotto, a replica of the Grotto in Lourdes, France. Jeff and I always thought the boys’ first visit to “The Grotto” would entail a visit to our old Notre Dame stomping grounds, but alas, it was in the Netherlands. This, like the one at Notre Dame, is a peaceful site where we were able to take a minute to offer some prayers and light a few candles. The backdoor was closed, disappointing H. You can visit the Valkenburg Castle ruins, although we decided just to take a little walk around them. The castle was destroyed in 1678 by the Dutch to prevent it from falling into the hands of the French under Napoleon. It is unique for being the only castle in the Netherlands built on top of a hill. There are several other cave tour options in Valkenburg. The Velvet Caves are another cave network that actually run under the castle ruins. They are open for tours. These mining caves were created when stone was removed to build the castle. The remaining caves were also used as escape paths and secret tunnels for knights and lords of the castle. We did not venture into them as we opted for the Catacombs and had seen similar caves on our last trip to Maastricht. The other option is the Cave Tour Experience. This looks the most touristy with a light show, train tour and murals, but gets great reviews online. Our walk back to our car took us through some of the most scenic parts of Valkenburg. The pedestrian passageways pass under restored city walls and castle gates and are lined with cafes. We stopped into one (browse a menu and take a pick) to grab a snack. Every cafe we passed by looked great. There was a band playing in the main square as we left town. We stopped just long enough to dance a bit and enjoy the music before hitting the road to Maastricht.