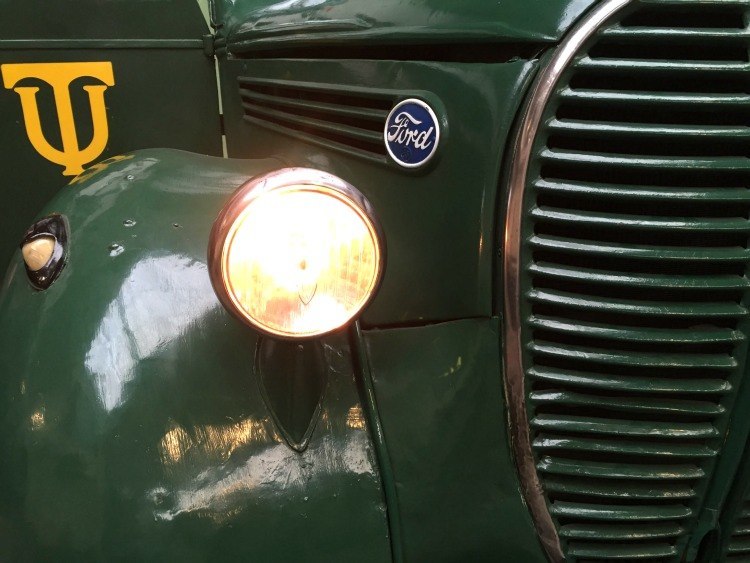 A Quick Afternoon in Liege, Belgium

Sometimes even the best laid plans fail. That is how we ended up in Liege, Belgium. Making the best of poor planning that led us to completely forget that Monday was a U.S. holiday, we booked an extra night at a hotel and decided to spend our free Monday in Liege. We chose Liege because we knew there was a transportation museum and we figured the rest of the plan would take shape from there. As soon as we drove over the border into Belgium we noticed a difference. The roads were all under construction and the windmill-lined river gave way to factories. The boys almost instantly fell asleep.

Jeff and I drove through Liege seeing what we could from the car and finally parked outside the transportation museum assuming the boys would wake up. They did not.

Jeff went inside to get a lay of the land. We discovered that the museum closes from 12-1 for lunch. It was of course noon. Jeff got directions to a place for lunch and we waited for the boys to wake up. They did not. We sat in the car reading our books. (Thank goodness for a Kindle and iPad in the car.) We were the only car in the parking lot. The doors to the museum opened and out came throngs of children who were visiting the museum on a school trip. They proceed to play games around our car. Many involved children thwacking into our car over and over. Still our boys slept. Finally, once the school children had come and gone and the museum opened back up, the boys woke up. They were both starving. Having expanded our trip by a day the snack supply was running low. We walked a few blocks to the mall where we found a variety of options in the food court. It was not fancy but it fit the bill. We had a bit of a cultural-adjustment experience just ordering. Everyone in the Netherlands seems to speak English, but the folks in Belgium all spoke French – Jeff had to point at things on the menu to order us lunch. We returned to the transportation museum where we were the only ones there. They had English audio tour guides. We started using them but quickly abandoned them on the stroller as the boys hopped in and out of busses and trams, pretending to be drivers and passengers. We stayed at the museum until it was ready to close. The museum also had posters and paper trams as gifts for the boys. Upon leaving we picked up a ton of brochures about things to do in Belgium.We did not have time for any additional exploring but have a whole list of things to see next time on a more well-planned trip.