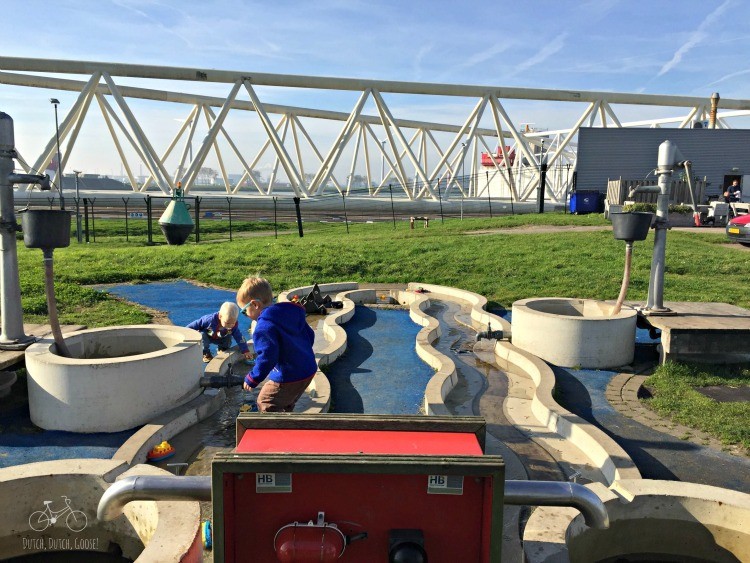 The Dutch are experts in water management.   Over 55% of the Netherlands sits below sea level. Exacting measurements are made in Amsterdam where the normal sea level is called Normaal Amsterdams Peil. Most of the land that sits under sea level was created by the Dutch. They drained water through a system of polders, canals and windmill-driven pumps. On our visit to Kinderdijk we learned how the land is continuously drained.

God created the World, but the Dutch made Holland.

The goal now is to defend this land from rising sea levels and heavy rain. Cue the Maeslantkering. These giant storm surge gates are part of the Deltaworks Project which began after the devastating 1953 flood. The large Maeslantkering gates are one of the largest moving structures on earth. They have to protect Europe’s largest port in Rotterdam from a storm surge without hindering the movement of cargo in and out of the port.

You can visit the gates, and it is well worth the trip. It is a short 45-min drive from Delft and your 2 Euro admission fee covers admission to the museum for a full year. The small museum is full of hands-on exhibits, although they are entirely in Dutch. The kids loved pushing the buttons and running the simulations. There were even anthropomorphic Maeslantkering coloring sheets available. Outside, you can walk up onto a hill to see the gates from above. The boys enjoyed the cargo ships which are constantly passing in and out of the gates.

The real highlight though is the water playground. The boys (Jeff included) built dikes to simulate how they can hold back the water. The playground has hand pumps as well as an electric pump to fill the track with water. English tours are available, although we did not attempt one with the kids.

Once a year (typically the third week in September) they test the gates. Closing them in the afternoon (4pm-ish) and leaving them closed for a few hours.  The gates close by floating into place and then are filled with water to sink them. The process is reversed to open them again. We hope to be able to see them close during our time here

You can go here for some great overhead shots of the gates. It is hard to imagine how they work when you are standing up against one of them. There is a beach just down the road from the gates. The town of Hoek van Holland is also where the ferry to England departs. We headed to the beach to give the kids some sand play time, to watch cargo ships and grab a snack. This beach looks like it is hopping in the summer, but had a very relaxed attitude and free parking in the winter season. There was a playground in the sand on the far end that was teeming with families including ours. We chose a little cafe that had a bounce house and a playground to enjoy a coffee and cake before our drive home.