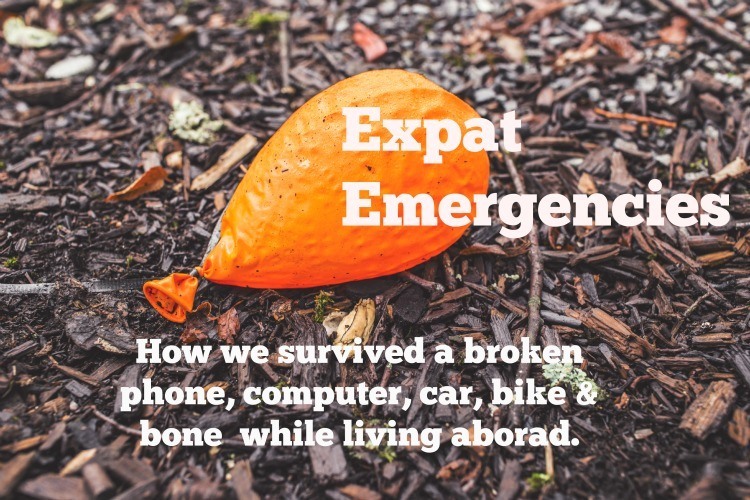 We’ve had a run of bad lucky lately around here. In the course of a month we have endured the breaking of an  iPhone, a computer, a car, a train and a baby. I’m really hoping we are done. Here though is a run-down of how we weathered the storm and the lessons to be learned along the way.

First though remember that the emergency number here is 112 – NOT 911. Put it in your phone now. If you are not from here, you probably won’t remember what it is in an emergency.

The iPhone was simple enough. I was using it when one of the kids grabbed it. It fell to the ground and despite the case and Gorilla Glass the screen shattered. We were a few blocks from the Apple Store in Den Haag. Unfortunately they did not have an appointment for another week. Then on the day of our appointment they called – after Jeff was already on the train to Den Haag – to tell us the WiFi was out in the store. As a result they would not be able to fix the phone. They rescheduled us for another week. When Jeff took the phone to the store for the third time we found out the phone was bent and would need to be replaced. A new phone was ordered but because it was a U.S. Phone it would be. . .yes a week before we could pick it up.

Lesson Learned: When toddlers are involved make sure you have Apple Care.

Sometime while the whole iPhone drama was going on the MacBook Pro’s hard drive failed. The Apple Store did not have an appointment for another week. (See a theme here!) The MacBook was still under warranty so once we were able to get it to a store they fixed it although it took them the whole day which required another trip to the store to pick it up.

Lesson Learned: Your home insurance may have a policy that covers your computer and tablet, although it will not cover your phone. We did not have to file a claim however since the computer was still under warranty.

Since we ride our bikes every day and bought them second hand we have quite a few small bike repair issues. Jeff is able to do most of the maintenance on our bikes but sometimes they call for a repair on the go.

Our first bike emergency happened when we returned home from a train trip to find Jeff’s bicycle tire completely flat. Luckily, we were at the Delft train station which has a bike shop inside the bicycle parking area. They were able to do a quick repair of the tire while we waited. The train station also has rental bikes so we could have taken a rental bike while they had Jeff’s bike.

The second bike emergency came when Jeff was riding to work and broke a chain. He was able to walk to a nearby bike shop, wait for it to open and get it fixed. It took most of the day for them to fix the bike but they did have a loaner bike for him to borrow so he could get to work on time.

Lesson Learned: Know where all the bike stores in your town are located. You never know when one might not be open. We also have come to find some stores have better knowledge of bikes then others and have a preference for which one we like. We were driving near Schiphol airport when the car started making a funny noise. This was followed by loud thumps. The battery light came on. The power steering went out. We tried to get off the highway but ended up on an on-ramp to another highway. We called USAA but their international roadside assistance is not open on weekends. The U.S. road assistance was willing to help us out by sending an e-mail to a German company. Unfortunately the e-mail did not go through. We called a friend to come get the kids and me and take us home. Jeff stayed on the phone with USAA to get someone there. Eventually the police saw him on a highway safety camera and came over to hang out with him until the tow-truck finally arrived.

With our car in the shop and not ones to be set back, we took the train to Utrecht for a full-day adventure. We had biked to the train station, so on our evening ride back we were surprised to find ourselves pulling into Den Haag Central Station.

I’m sure if we spoke more Dutch we would have understood the announcement, but instead we found ourselves not where we needed to be.

We used the 9292.nl app and the public WiFi to find all the possible routes home. There are so many options from Den Haag Central Station. We decided on a train leaving in 20 min.

We had just gotten a call that the computer was fixed and available for pickup at the Den Haag Apple Store. Jeff took off on his own to run into the store and try to meet us back before the train left. I took the kids to the Albert Heijn To Go and we picked up some sandwiches and other dinner items. I got the kids settled and eating on the train and moments before the train took off a sweaty Jeff appeared in the door, computer in hand.

after the train adventure we were involved in a small bike accident and our little one’s hand was caught under the bike handle. To make a long story short he ended up fracturing his thumb and requiring a cast.

The medical system works a bit different here than in the states. We needed to call a doctor to have them first look at his hand before heading to the ER. We had not yet signed the kids up for a “house doctor” (i.e. primary care) here so instead rushed our screaming child into the student medical center. They provided us with the needed referral to the ER.

Alternatively we could have called the emergency number, 112. There were also police on the street that responded to the accident, but I turned them away in an attempt to calm O down. At the time I thought he was just frightened and had not seen his rapidly swelling hand.

Once we got the referral we biked as fast as we could to the ER. The medical process was speedy and we saw a radiologist and doctor pretty much immediately. They also made us the follow-up appointment to have the cast removed.

My only complaint was the lady putting the cast on our little guy’s arm was slow as molasses and we were unable to find a common language.  I still cannot fully understand how she thought my one-year-old was going to sit still through getting a cast on. At the end my coat and his clothing was covered in the cast material, which thankfully washes out.

With no car, a little one in a cast and new electronics we decided to lay low for a few days. The good news is now a month later we have mostly returned to normal and are smarter about how to handle emergencies in the Netherlands.