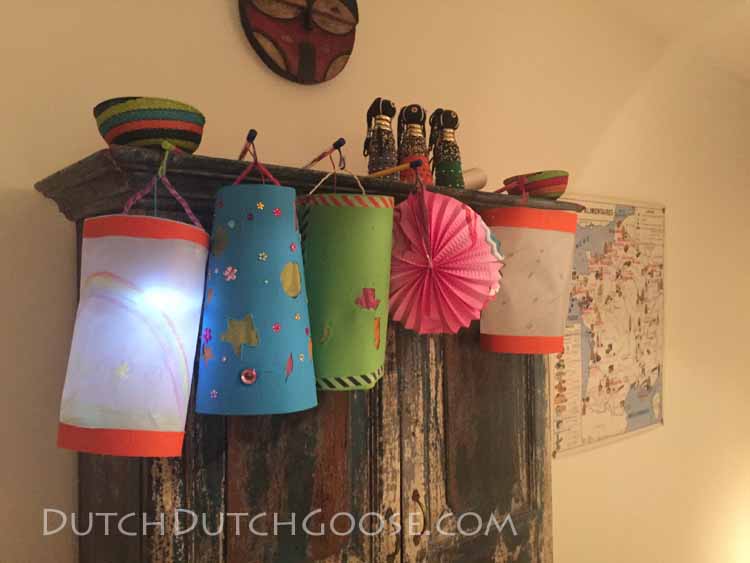 The Feast of St. Martin is celebrated each November 11th with children going door to door singing and carrying lanterns. Much like on Halloween, children are given a treat at each house they visit. St. Martin is known as a friend to children and a patron of the poor. The children celebrate St. Martin’s with “lantern parades.” Children walk around the neighborhood, knocking on doors and singing the St. Martin song. They know which houses are participating because families places a lit lantern by the street. Although Halloween is gaining popularity in the Netherlands, it can be quite scary. It is largely viewed as an event for older children. The “haunted woods” this year was scary enough to keep even Jeff away. We stuck to the typical “fun” Halloween opting for a Royal theme. This was a bit unfortunate because the neighborhood kids kept asking Jeff is he was posing as King Willem, which he was not. As Americans we celebrated more traditionally this year with our Delft Mama Halloween Party, which included bobbing for apples and costume contests. Then we went with our expat friends door to door for some Trick-or-Treating. (You can read about last year’s Halloween here.)

St. Martin’s has a completely different “family friendly” feel. Last year the holiday passed us by, since we still felt new here and were largely confused about what was going on.

This year we asked some parents at H’s school and before we knew it were invited to join a group for the festivities. (Ok… we may have sort of invited ourselves!) The only instruction was to show up with a lantern on a stick. We dutifully went to the forest and found the straightest stick we could. In fact Jeff and the boys brought back several options. Then we repurposed a camping lantern from the boys’ birthday party by attaching it to the end of the stick. Turns out that the lanterns are traditionally made of paper. A light stick can be purchased from a local store (Hema, Bruna) and you color paper to wrap around it. Oops!

With our very American lantern we headed off with our Dutch friends. Jeff and H went out while I stayed home with the other two littles to hand out candy to those who came by. They started the night with a small party at one of the homes, where the kids played, the adults chatted and enjoyed drinks and everyone had a hotdog sandwich. Halfway through the evening Jeff texted me to tell me we needed to put a lantern in the front so families would know to stop by. Good thing those camping lanterns came in sets of two! haha. (Next year we will get some paper lanterns to set out.) Once the lantern was out the families and groups stopped by to sing the St. Martin song.

A few moments later Jeff texted me again to put a few bottles of wine in the fridge since the group was headed our way. The kids were going door to door but the parents were stopping for some wine along the way. (Sounds like my kind of event!)

When the group got to us they were cute as can be! The kids were all hopped up with sugar, except for our kid who wanted to save all his treats for “later.”

You can watch the kids sing the St. Martin song here. It was actually much more fun than scary Halloween and we look forward to participating again next year.. but with a paper lantern!