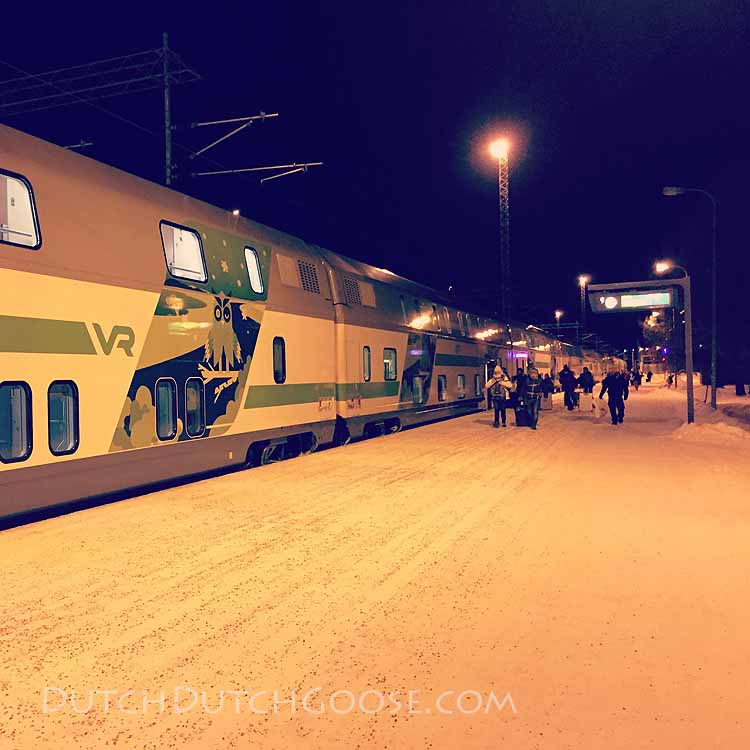 Going on an overnight train has been on the kids’ travel “wish list” for a while now. Finland’s Santa Claus Express night train seemed like the perfect time to cross this off our bucket list. We were so sure it was going to be a good time we booked the train both ways. The 12 hour journey would take us from Helsinki to Rovaniemi, while we were sleeping. Our train from Helsinki left at 7pm arriving in Rovaniemi at 7am. Helsinki is the origin point for the train so there is plenty of time to get on and get settled. The train was at the platform 10 min before departure time. We were a bit early to the station, so we waited inside until we saw it pull up.

We thought the 7pm departure time would be easier since the kids didn’t have to stay up late. However, I spent most of the evening worried we would miss our 7am departure stop, where the train would stop for 5 min before moving on. I set every alarm we had, including the clock alarms in both bunks in the room. We did not miss our stop, Jeff even got up in time to shower.

On the way home we took the 9pm train. This turned out to be a better option. The boys went right to bed when we boarded the train. Everyone woke up naturally and we were ready to go when the train pulled into the Helsinki station at 9am. We were in one of the new double decker sleeping cars. We decided that we would book two sleeping compartments to accommodate the five of us. Each room had one set of bunk beds, a fold up seat, a table, a sink and a window.

Bathrooms are down the hall. Ours were clean and spacious enough. The shower room requires its own key, which is available with each room. Jeff showered during both train rides, but the kids and I did not.

Jeff called in advance to ask for adjoining rooms. This gave us a bit of extra space, although we shut the door to sleep so we didn’t disturb each other.

You can also call and get netting over the beds. We asked for all the beds to have this put up. It just provided a bit more safety with the kids in the bunks. It was easily removable once we figured out who was going to sleep where. I shared the room with our big and little littles. The big little slept up top and loved it. The little little slept in his Diono Bassinet, tucked onto my bed. I was a bit cramped, but slept fine. The beds and bedding were actually quite comfortable. The kids loved the owls on their pillows. We kept our window shade open so when I woke up I could peek out at the passing snowy landscape. It was quite incredible. The train stops frequently and I did wake up a few times because of the light from the stations. Jeff and our middle little had the window shade down.

The train has amazing wifi and plenty of power ports in the room. We were able to charge up all our devices and even stream some media on the ride. The station in Rovaniemi is small. It was cold when we got on and off so we were glad to have the kids fully bundled up. There is a small indoor station with a restaurant and pay toilets.

We expected we would be able to grab a cab from the station into town upon arrival. We were wrong. There was seemingly one cab and a long line of tourists waiting for it. Instead we walked into town at 7am. On our route home the hotel called a cab for us and we were dropped off at the station stairs.

If you have the option to do this overnight train I think it’s a lot of fun and is a good value. Using the trains twice essentially gave us two additional full days in Rovaniemi without needing lodging. Plus, we were able to fly out of the bigger Helsinki airport which saved us on our airline tickets.