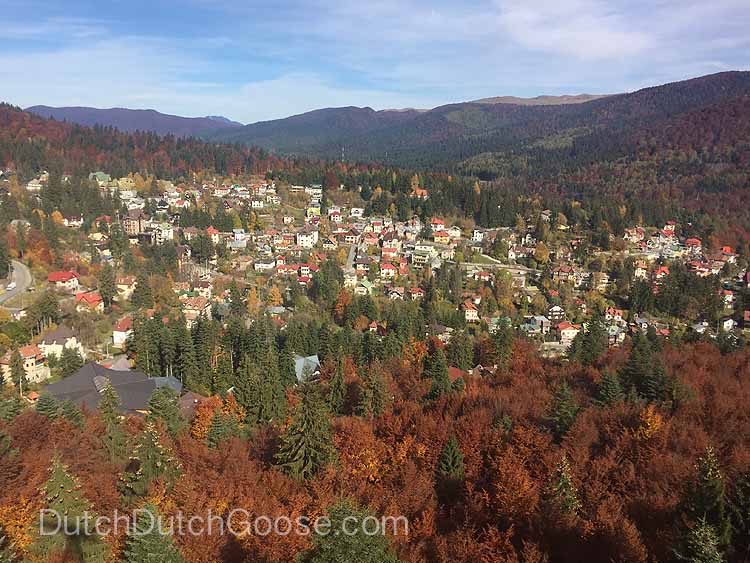 A day trip to Sinaia, Romania

With fall all around us we opted to head out of Bucharest on a day trip to the mountain town of Sinaia, Romania. If you read my earlier post on Bucharest you’ll know we were having a bit of trouble there, so getting out of town provided a breath of fresh air. Romania blossoms in these small towns, and although we still encountered a few problems we were much more relaxed and able to enjoy ourselves away from the city.

We took the train from the Bucharest main station to Sinaia. The train tickets only cost a few Euro and the hour and a half train ride through the mountains is magnificent. Seats are all assigned, so check your ticket before you board. Our first order of business was to walk through town. We were headed to the gondola to take us up the mountain, but instead of following the footpath, ended up following the signs intended for cars. It led us in a large loop but we got to see a bunch of cute houses, including one that the kids loved because it looks like a face. This place looks like the most charming place to live. The Cable Car and Gondola system in Sinaia is incredibly confusing. It is run by several different companies so it’s best to know where you are going before you arrive. The service is not exactly regular. They stop for lunch and depart only on certain hours. We went over the schedule with great detail before we purchased our tickets (~9 Euro) and headed up the mountain. The views from the gondola are spectacular. The ride is smooth but we could not get the windows on the car open on the way up and we were all boiling. They had packed the car full, we had full sun and there was zero air circulation. The two minutes we hung and waited to go into the docking station at the top felt like an eternity. You can see the entire town including Peles Castle.  Many people come to Sinaia to visit Peles Castle, but after some mixed reviews and concerns about being charged for each floor you visit individually, we opted to spend some time outside enjoying nature. The view from the cable car was perfect. Once at the top of the cable car we changed to a gondola going back down, but not all the way. The gondola is not run by the same company so we had to buy new tickets. The gondolas are modern and run continuously. This gondola takes you to the national park. We saw lots of people who were renting mountain bikes. We walked a bit down the road to reach a restaurant that had been recommended to us by a local friend of Jeff’s. Taverna Sarbului was one of the highlights of the trip. The food was delicious. You order a plate of meat and it comes with some sides. Everything was tasty and perfectly cooked. We all enjoyed the large local beers as well.

Once we left things once again got messy. We tried to re-board the cable car up the hill to take the gondola back into town. Unfortunately they told us that we had only purchased one-way tickets. We explained that we had told the person at the booth our plan to have lunch and return so we should have been sold round trips. Instead of charging us the difference for the round trip ticket they said we needed to buy the full fare one-way. It was a giant mess. In the end we handed over just the difference in the money and boarded the gondola.

The whole mess though took us so much time that we missed the cable car back into town. The cable car left a full two minutes early from the station. As a result we were stuck on the hill for another hour with nothing to do. We enjoyed a nice walk and let the kids throw some stones down the mountain. Once we were back in town we headed to Ghica Park in downtown Sinaia. There was a lovely playground and walking paths. It was nice to spend some time just letting the boys run around.  This is the perfect place to enjoy a short walk. Just across the street in town are a line of cafes with outdoor seating that would be perfect for grabbing a bite or a drink. When the boys got tired of the playground we walked uphill to the three hundred year old Sinaia Monastery, after which the town is named. The complex contains the main monastery, a smaller monastery built in 1695. The webpage says there is a fee to enter but we never found anywhere to pay and tour groups were flooding into the place from a bus. As we were checking out the smaller monastery the boys discovered a bunch of kittens running around. They could have watched the kittens all day. Our Big Little cried when we had to leave because he wanted to take one with him. The boys watching the kittens gave us plenty of time to explore the enclave for a bit. There are a few other things to do in this town. You can find a full list here. We were all waiting on the station platform when our train was supposed to arrive, but it never came. It disappeared from the board without any announcement. Jeff hurried inside to the ticket window to see what the situation was. Apparently our train had been canceled. I’m not sure what would have happened if we didn’t go to the window. It took Jeff nearly half an hour to be issued tickets on the next train headed to Bucharest, which was also running late. Eventually we got on a train with some very tired children. The train was crowded and noisy but ran smoothly on the way home.

When we arrived back in Bucharest we did not have the energy to argue with the cab drivers. Jeff found one willing to charge us only 200% more than the posted rate, instead of the 400% the first few drivers wanted and we took it to get the kids home and into bed. We ended another day in Romania annoyed with the way things worked, but astounded by the beauty of the country.