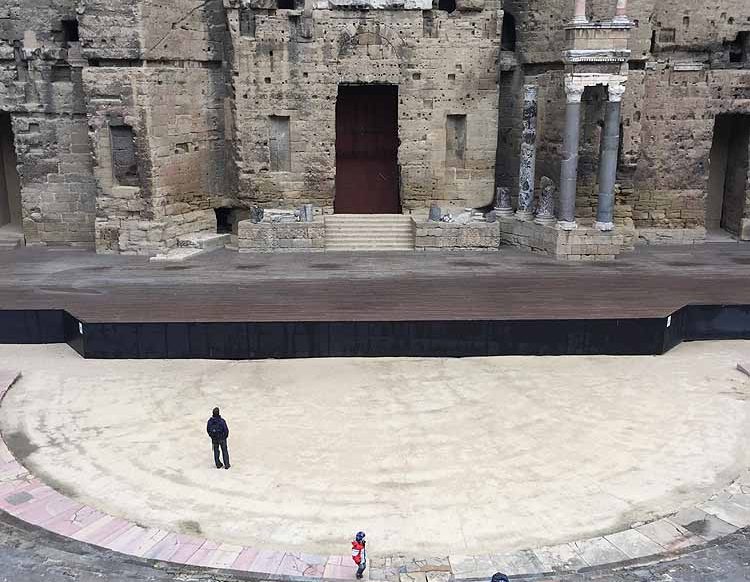 We headed to Orange, France to check out the Roman Theater. While the Roman Theater is the main attraction in this Provence town, Orange is as cute as any other town in the Provence region and worth spending a bit of time exploring.

Our visit to Orange was unfortunately on a rainy, cold day. The market was in full swing, but the weather kept crowds to a minimum. We easily found parking in one of the many paid public parking lots and headed into the market with our umbrellas. The season and weather kept the market small, but it was still fun to walk around. We made our way through the market across the old town to the Roman Theater. We purchased our tickets and the staff advised we head over to the museum across the street since it is included in your ticket and closes midday for lunch. The Orange Museum is an Art & History museum with nothing particularly exciting for kids. Many murals and artifacts found around the city are housed here. We spent about a half an hour exploring the museum, which is about all the kids could handle.

Our Big Little enjoyed all the mosaics. One of his favorite travel activities is the Paint by Sticker for Kids books, which works a lot like a mosaic, so he was interested in looking at how archaeologists fit all the pieces together. We also enjoy the Roman Mosaics coloring book which was a great option to bring with us on this trip for down times. The Big Little also loves mythical creatures and there are plenty of these to find in the museum. He enjoys The Mythical Creature Bible and the fully illustrated book Fantastic Beasts and Where to Find Them. These two books have really helped keep him engaged on trips like these. The Little Little was happy to ride along on my back through the museum and Jeff kept the Middle Little engaged with a game of I-spy.

We left the museum as it was closing for lunch, unfortunately this meant that most everything in town was also closed for lunch! Oops! We found one little shop open and grabbed sandwiches and soup. We had just enough time to eat at the small counter before being swished out as they closed for lunch as well. We would have been better served to pick up lunch prior to going to the museum or arrive with a packed lunch. After lunch we headed back across the street to the real Orange attraction, the Roman Theater of Orange. This is one of the best preserved Roman Theaters in the world. The entire back of the theater remains. Our visit on a rainy day in the off season meant we had the place to ourselves. This gave the kids lots of leeway to explore.

An audio guide is included in admission. We didn’t use them as the kids plus the rain had our hands full. There is signage throughout the theater. We also used the Rick Steves Provence book. (Rick points out that you can see into the theater from the park on the hill behind and avoid the admission cost altogether.) The kids took turns performing and testing out the natural acoustics of the theater. They also really enjoyed going up and down the stone steps of the theater. You can explore all around the interior of the theater and ponder all the shows that have been performed throughout history in this space. The most interesting tidbit for me though involved the statue above center stage. The head comes off and could be replaced by a bust of the current emperor. That way they always had the right person in the center of the stage but didn’t need to replace the entire statue. We’ve seen so many theaters but never with a full backdrop so imagine that all over the Roman Empire they would replace the head of these statues with a regime change.

There are several exhibits inside the theater as well that guide you through the history of the theater. I wish there had been more pictures of the theater throughout the ages as the few displayed were fascinating. Seeing the same theater backdrop of the Roman Theater as the period dress changes in front of it really drives home the idea of how long this theater has been in use.

We walked a bit around Orange after the theater just taking in the city. You only need about a half day in Orange so it’s easily combined with another town in Provence.

This post contains Amazon affiliate links. When you purchase through these links Dutch, Dutch, Goose! receives a small payment at no cost to you. This helps us keep our travel advice website running.