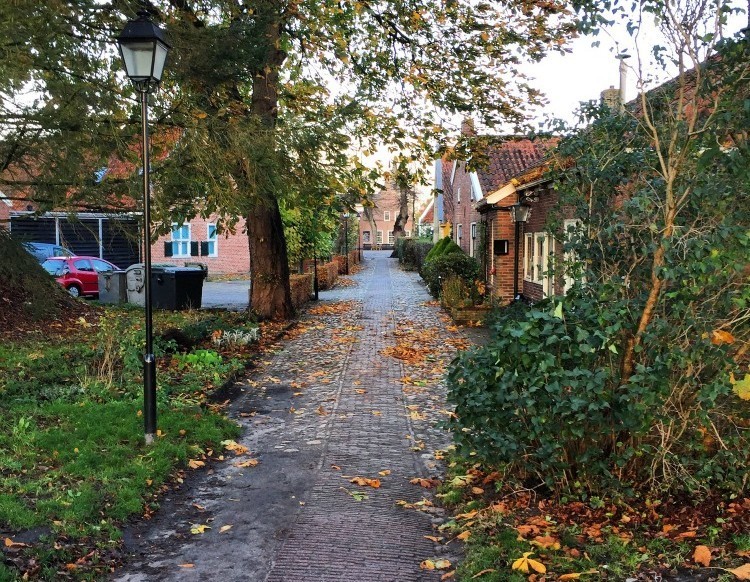 Fort Bourtange in the Offseason

Fort Bourtange was another “saw it on Pinterest” bucket list find for the Netherlands. This star fort on the German border was built to control the only road from the city of Groningen into Germany, but it’s now one of the most charming places we have visited. I’ve read a few blogs about the fort overflowing with tourists. Our mid-November visit was quiet and magical. There was not a tourist in sight. We booked a room  at Vesting Bortange (here) allowing us to stay the night in the fort. When Jeff checked in, we thought we would be outside the fort but were instead given keys to a building that required us to drive through the city gate and park right in the middle of the fort town. The lodging includes your breakfast. We did opt for a room without a bed in a box. In hindsight maybe we should have given it a try! We were in a spacious room in the converted stables, I promise it was better than it sounds. The bathroom even had a bathtub and the ceiling was vaulted. We arrived just in time to check in for the hotel, and only a few minutes before the museums in the fort closed. Since we had the kids with us, we decided to forgo the combined museum ticket that provides entry into the four museums in the fort for the day.

Instead we parked in the fort (a privilege for only residents and guests staying in the fort) and made our way around the wall. The kids had a blast running up and down the steep hills of the fort, playing on the cannons and even peeing into the moat via the still-operational bathrooms. We explored the old church and the base of the windmill, peered into the windows of the closing shops and chased a cat through town until a storm blew in. We retreated to our hotel room for a quick change and headed off to dinner. There is only one dinner restaurant inside the fort. Restaurant ‘s Lands Huys provided us with the best meal we have had in the Netherlands to date. There is a small English menu with lighter options, probably due to the tourist crowd only being in the fort for lunch. We opted to order off the Dutch menu and were not disappointed. Kids are welcome in the restaurant. The staff provided a high chair and had a nice childrens menu. Once the delicious amuse-bouche arrived, we gave the kids electronics so we could enjoy the beer and amazing food. I ordered what I translated to be a baked cod fish. The cod came in a delicious butter and cream sauce covered in mussels. I repeat, covered in mussels! Jeff ordered a lamb shank. As is the Dutch fashion the entrees came with more sides than you could imagine: potato, vegetable, salad, cranberry relish. At the end of our nearly hour and a half dinner, another Dutch standard, we were stuffed and the storm had momentarily passed.

Our night in the hotel was one of the best we have had in a long time despite the storm kicking up. We woke up, the boys got a quick bath and we walked down the street for breakfast – the full Dutch spread. Since occupancy at the hotel was low (just two rooms), the breakfast staff did not present a buffet. Instead, they filled our table with plates and plates of goodies. Our bellies were full of cheese, breads, sprinkles, soft-boiled eggs and meats. We took a few more laps around the town before we got back into the car and took the road to Groningen to explore the city.

Fort Bourtange was part of a road trip that included stops at Westerbork, Borger,  A Star Fort and Groningen.