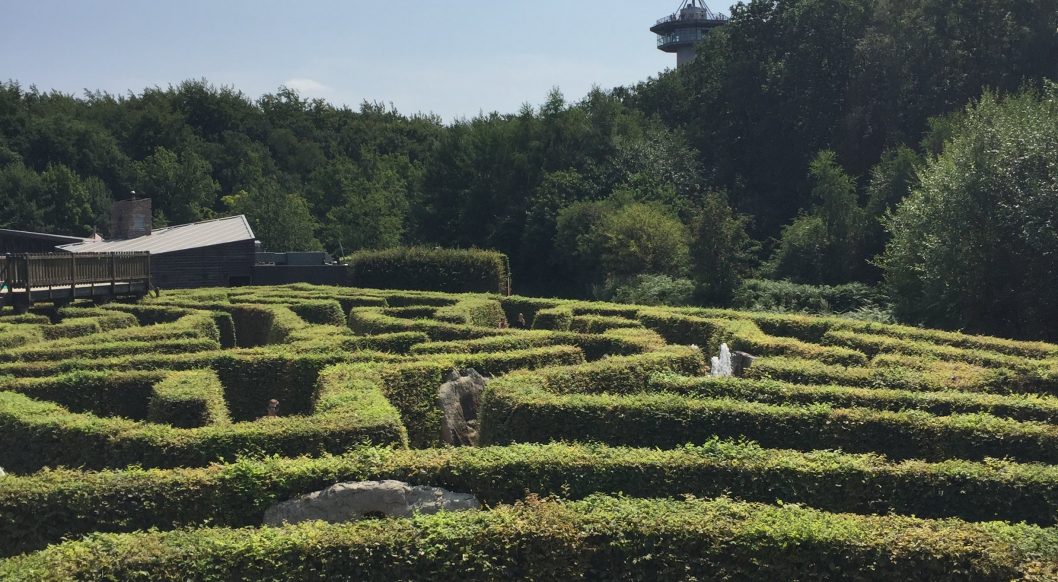 The Tri-Country Border Labyrinth was one of those touristy stops that we just had to check out. The corner where The Netherlands, Germany and Belgium all meet is packed with viewpoints and restaurants, but we couldn’t resist the kitsch and fun of the Tri-Country Border Labyrinth. It turned out to be the hardest Labyrinth we’ve ever experienced and afforded us over an hour of fun. We arrived at Drielandenpunt around 11:30 on a summer Saturday and the place was busy, but not packed. Paid parking is available, though you’ll need a €2 coin to get out of the lot.  We found a table at the adjoining restaurant. We decided it was better to feed everyone before we headed into the maze, so as to not be lost with hungry kids. The labyrinth looked pretty serious. We sent the big kids to play on the large playground while we ordered. The menu is full of Dutch favorites plus a kids menu with smaller portions. The Little Little opted to stay at the table and play the bunny tail matching game that I keep in my purse. The pace at the restaurant is European leisurely, so it was good to have something to do. Everyone cleared their plates. With everyone fed we headed to the labyrinth. Admission is around €4 for adults and €2 for kids. We brought the carrier for the Little Little, which turned out to be a life saver. We wish we had known to put the kids in swimsuits and water shoes. At the very beginning is a jumping fountain you play in. It was hot and the boys would have loved to run around in the fountain. The labyrinth is also full of water gates. They go up and down at various points. At some point in the maze you will get wet. It happened to each of us. If we had had water shoes and bathing suits on we could have walked right through these gates, saving us a bit of time in the maze. As it was, we spent a lot of time standing at water gates, preparing to run through them. The labyrinth was intense in the best way possible. We’ve visited quite a few in Europe and this was by far the best. The water gates added a fun element. The hedges were too tall to see over, and too thick to see through. Fencing running through the hedges also prevents people from creating their own paths. I was a bit worried after we were kicked back out of the maze for the third time that the kids would grow bored, but there are enough fun things hidden in there to keep kids excited to explore more. We passed the two dragons a few times, but luckily we knew passing through them meant a dead end. We only bumped into this bear once. The kids tried to climb it and kept asking to come back to it, but we never found him again. There are small towers, fountains and fun finger mazes all hidden within the labyrinth. The Big and Middle had a blast running through the hedgerows. We did have to institute a rule that we would all stick together, as we saw several other families become separated. There are several routes to the middle but the one we found required us to cross over all three of the bridges. Each bridge gave us a bit of a better view of how to approach the center. It took us over an hour to get there. Once you reach the center though you are rewarded with a view of the maze, as well as the border. The tall tower in the back sits at the actual point where all three countries meet. The way out from the center is well marked, so you won’t need to find your way back out. (Something I was actually quite worried about.) This was a great outing with the kids and a great stopping point on our way into Germany. We had three sleepers shortly after pulling out of the parking lot, something that rarely happens to us!