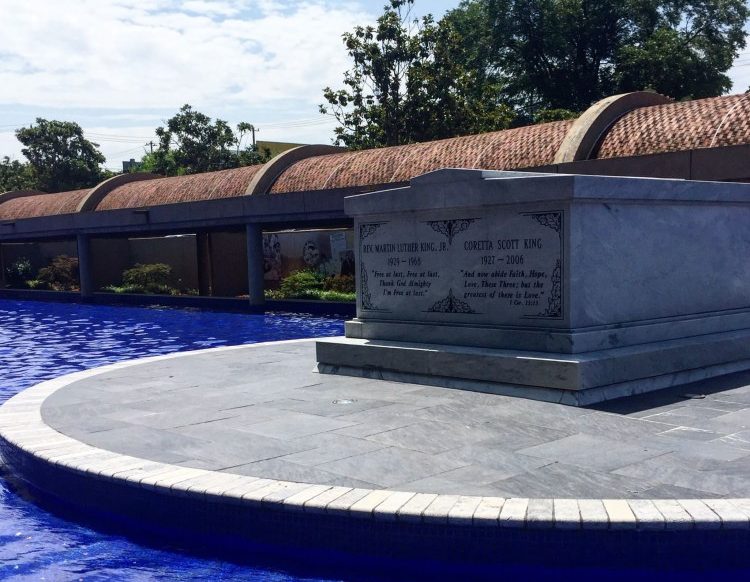 The MLK National Historical Park is located in downtown Atlanta. It has its own dedicated, free parking and is accessible by public transit. The park is made up of several locations spread out over a city block. You may want a to bring a stroller or carrier with you if walking on city streets is not something your children excel at.

MLK’s birth home was recently added to the park. You do need free timed tickets to tour the house. These tickets are distributed each day at the visitors center and typically run out. We saw lots of people waiting in line for tickets later in the day and leaving disappointed. Plan to get there early if you want to tour the house. We decided the guided house tour was not a good idea with our rambunctious group.

Inside the visitors center you can pick up a Jr. Ranger booklet that helps kids understand the historic site and the life of MLK. The packet was a great way to keep our Big Little engaged in the museum. You’ll find plenty of video of MLK speaking too, which my Littles found riveting. We didn’t have time to read everything in the three-room museum with the littles, but I felt that we got a good overview.

Benches throughout the museum are a perfect place to stop and work on your Jr. Ranger packet.

There is a child-friendly exhibition in the lobby that introduces kids to segregation and MLK’s non-violent principles.

Across the street from the visitors center is the Center for Nonviolent Social Change. This is also where you can see the graves of Martin Luther King Jr. and his wife in the center of the reflecting pool.

The Fire Station across the street is also part of the visit. It was one of the first de-segregated fire stations in the city of Atlanta. Here two volunteers took the time to chat with our kids. One had been at MLK’s “I had a Dream Speech” in Washington, DC. He told the boys how crowded it was but also about the electricity that ran through the crowds.

The other volunteer was a former firefighter. He had gear for the kids to try on and also photos of himself in the same gear.

With completed packets we headed back to the Visitors Center to take the Jr. Ranger pledge and have the boys receive their badges and certificates.

We let the boys enjoy the great playground just behind the Visitors Center. It is on the walkway toward the parking lot, where no child will miss it. It is a great place to stop and play and a fun way to end your visit.