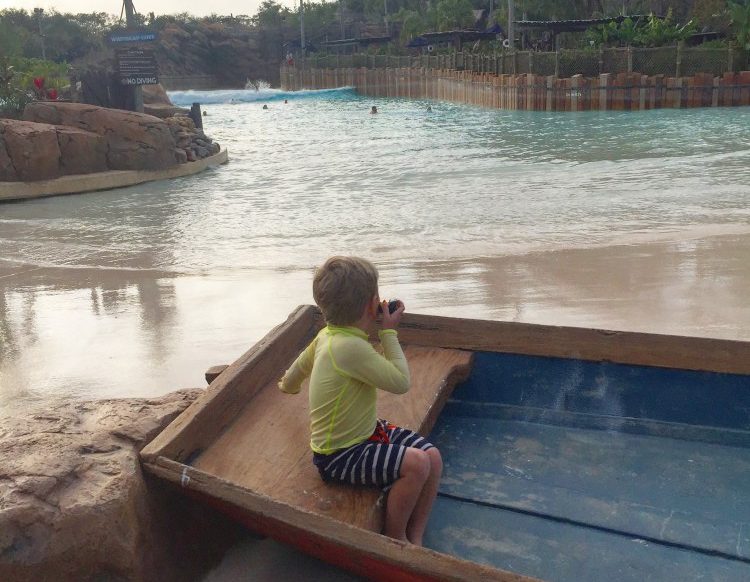 Completely unplanned, we found ourselves at a Disney water park in January and it was amazing! What the park lacked in warmth it made up for in zero wait for every ride at the park. I actually may never go to a water park in the summer again…ok that is not true, but the off-season has some real charm.

Typically in the off-season Disney has one of its two water parks open while they do maintenance on the other. The schedule was in flux the week we were in Orlando. On Friday, it was Typhoon Lagoon that was open and we jumped at the chance to go to this extremely family-friendly water park. Jeff went to Typhoon Lagoon 29 years ago so it was fun for him to see the iconic water features again.

In early January, the forecast for the day had the high at 85 degrees. We let the temperatures rise a bit and arrived at Typoon Lagoon at 11am, an hour after opening. The parking lot was basically empty. Parking at Typhoon Lagoon is free. We purchased our tickets at the entry.

We arrived in our swimsuits and brought a bag with us that included lunch foods in a soft sided cooler, sunscreen, a change of clothing, travel towels and goggles for everyone.

Once through security, we found a place to put down our things. When all the spaces are open it can be difficult to decide where to go. We opted for some chairs between the wave pool and the lazy river. This was the perfect place to dump our stuff.

There are lockers available for rent, but we just didn’t bring our valuables with us. (Hence why I don’t have many photos.) If you were staying on property you would need nothing except your magic band. We had just a credit card and my apple watch. The whole park has wifi so my watch worked great! (You can use apple pay at all Disney Parks.)

Typhoon Lagoon keeps its water between 81 and 84 degrees year round. We found the lazy river to be on the cooler side, although not unpleasant. Meanwhile the pool by the Crush n’ Gusher water coaster was on the warmer side and the children’s pool was downright steamy!

Typhoon Lagoon has life jackets available for everyone to wear, free of charge. Our Little Little was the only one who needed one. We put the Middle Little in one to head out into the wave pool the first time, but discovered he was just fine without one.

The great thing about Typhoon Lagoon with kids is that there are only two slides with height limits. Our Big Little (7) was able to ride everything in the park and the Middle (5) and Little (3) gave everything they could a try! Everyone had a great time.

Visiting Typhoon Lagoon in the off season meant we waited for nothing. We rode rides back to back, as fast as we could get back up the stairs…and there are a lot of stairs. Some rides even allow you to stay in your tube and just ride over and over when there’s no line.

The Typhoon Lagoon wave pool is the largest in North America. It puts out 6 foot swells and bobbing waves. There is a posted schedule for the waves, but there is never a period where nothing is going on. The boys love wave pools, and this was no exception. The Little Little took his first 6 foot swell in the deep end and was pulled away from us. He laughed it off, but wouldn’t return to the deep end. The Big and Middle Littles loved diving under the wave as it crashed over them.

The lazy river, Castaway Creek, was my favorite. It is long and calm and travels throughout the park. We liked using it as a way to get around. It was cold, so the kids weren’t thrilled to get in, but were fine after the initial shock. There were a variety of float types though, which was super fun. The theming on the river is excellent and fun to enjoy, although you will get wet. I imagine in the summer the lazy river is packed!

Katchakidee Creek is the super fun children’s area. You need to be under a certain height to play here and that was strictly enforced. (All three of our boys were under the height limit.) The water here is super warm and shallow. There is a small tube ride just for kids that our Little Little couldn’t get enough of. There are also plenty of small water pools and puddles to play in. The two body slides in this area were a dud for us though, the kids kept getting stuck on them.

Keelhaul Falls and Mayday Falls are single-rider tube slides. The Big and Middle Littles loved these two tube slides. They were a bit bumpy for me, but still enjoyable. Gandplank Falls is in the same area and has a family tube that holds up to four people. For our family of five, we had to split into two tubes.

The five story drop body slide is the one ride our kids did not even attempt. It has aa 48″ height requirement and the Big Little was not interested.

The Storm Slides were a huge win for us, even the Little Little gave them a try. There are a lot of stairs to get back up to the top, but the slides are long and fun. The Middle Little asked to go back to these when we were doing “last call” at the end of the day.

The Bay Slides are smaller body slides just for little ones that empty into the side of the wave pool. The Middle Little and Little Little loved them. They do require an adult to be at the end due to strong currents from the wave pool that happen at the end of the slide.

Misadventure Falls is another family raft ride, but you get a lift up the mountain in your raft. The ride has an animatronic parrot and lots of twists and turns. It’s fast and fun. We rode it back to back like three times.

I saved the very best ride for last. The Crush n’ Gusher water coaster was amazing. All the slides allow double tubes and two allow single riders. It has a height restriction of 48″ so Jeff and I fought over who got to ride with the Big Little. The three slides are all slightly different. The Big Little and I both loved the coconut crusher, which has three hills in a row. The Pineapple Plunger is a good first start as it is the tamest of the three. Banana Blaster has a tendency to flip your tube at the end for a special surprise. Oh man, it was so fun!

We were unimpressed with the food selection at Typhoon Lagoon. We packed plenty for the kids but were hoping to pick something yummy up for ourselves. The food is standard park fare, but given the major food wins around the other parks we were hoping the same would be true here.

There are plenty of picnic tables around, particularly when the park is empty. We also just ate on our beach chairs without much trouble.

We had such a great time at Typhoon Lagoon. We easily stayed until the park was closed at 5pm. We hopped out of the water just in time to get changed in the dressing rooms. Showers and blow dryers are available.

I would 100% recommend a winter water park visit to Typhoon Lagoon if temperatures allow. We were thrilled to get to hop from attraction to attraction without the wait, even with milder temperatures.

This post contains affiliate links. Purchasing through one of our links provides Dutch, Dutch, Goose! with a small payment at no cost to you. As usual, all opinions are our own.