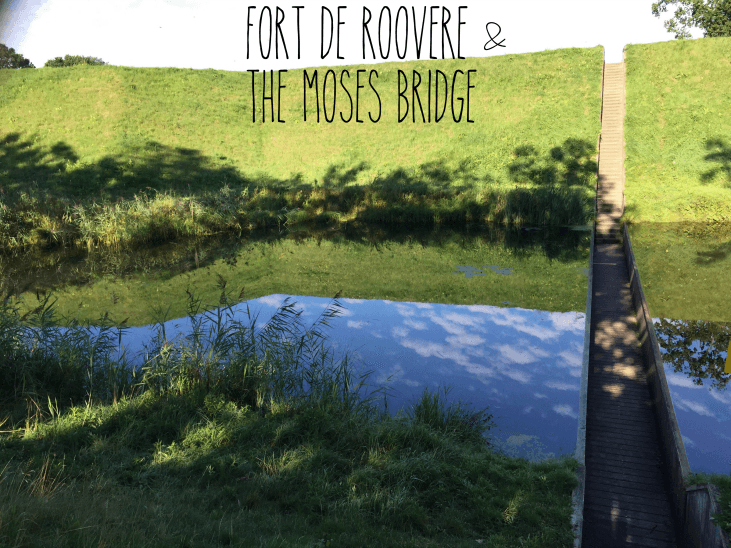 In anticipation of our move to the Netherlands I’ve been pinning things I wanted to see around Europe. One of those pins was the so-called “Moses Bridge” at Fort de Roovere. (The bridge’s actual name is the “trench bridge.” You can read more about it in this Daily Mail article from the bridge’s opening.) On our first non-unpacking weekend in the Netherlands,we decided to drive to Fort de Roovere. The earthen fort is the best preserved of the 17th century waterline defense forts. The fort has only one informational sign and you won’t find any buildings. Oh, and the sign is in Dutch.

The recent addition of walking and biking paths will help you explore what remain of the waterline defense system. We failed to bring our bikes on this trip, but there appeared to be a bike path that ran the length of the wall that would be fun to explore. There is a small dirt parking lot. Walk across the street and through the gate into Fort de Roovere. There is a walking path that takes you through the center of the fort and up onto the walls. This path will also take you down to the moat and across the trench bridge. Once you cross the bridge you can follow the path around to your right or left to circumnavigate the walls of the fort. We brought some pretend swords along so the boys could pretend they were defending the fort! We also brought lots of snacks. It was a short outing but quite picturesque. The bridge was in fact as amazing as I had hoped and we are glad we went. Driving there gave us a lot of confidence on the Dutch road network because the route was a mix of motorway and surface streets. It was the perfect first weekend outing.