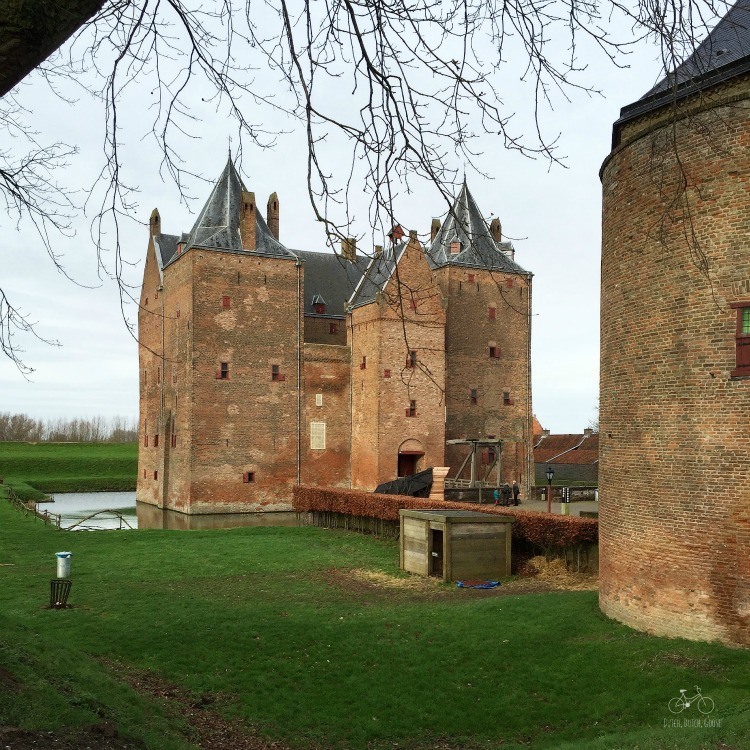 Slot Loevestein has everything required for a wonderful outing with the littles. Like many of the great finds in the Netherlands it is part of the Museumkaart program, making it free to cardholders. Slot Loevestein is a medieval castle build in the late 1300’s as part of the Hollandic waterline defense system of the Netherlands. The big plan was to build castles around the waterline as a barrier to invaders. It later became a place to levy tolls. Its fame, though, lies in its imprisonment of Hugo de Groot, a poet and politician. Hugo escaped Slot Loevestein by hiding in the trunk of books he had delivered weekly and freeing to France. (Oddly his family was living in the castle with him during imprisonment. Once Hugo was in France he petitioned The Netherlands to send his family to join him, and they did!) A visit with the Museumkaart includes the “Keys to the Kingdom.” These RFID chipped keys, worn on lanyards, set off attractions all over the castle. The boys thought they were the coolest things ever. In the gun barrel room the boys learned what chemicals they needed to properly load a cannon. When they achieved the correct combination there was a loud explosion! (Want to guess how many times we did that one?!?) The keeps opened the castle gates and turned on audiovisual presentations – some are even hidden inside of objects for the kids to find. The castle also had plenty of low tech fun for the kids. The first room has period dress up clothing kids and parents (there were adult sized costumes) can wear throughout the castle. H was already in costume when we arrived! And Jeff was a good enough sport to dress up for H. The castle is a bit confusing with paths doubling back on themselves. It took us two passes to get through the entire castle. The first time we exited through the kitchen without even going upstairs. We inquired at the entrance about places to picnic. The weather wasn’t great so they suggested we bring our picnic into the restaurant. We supplemented our packed lunch with some warm drinks and cake from the restaurant. With everyone fed and bundled back up we explored a bit of the castle grounds. There is a small “water playground” that lets kids play with the idea of flooding the defense line. We walked the perimeter of the defensive walls and watched the ships go by. The kids loved leading the way around the castle looking for attackers! There were also plenty of cattle and sheep to be spotted from on top of the wall. Back in front of the castle  were some stilts, rings, and wooden horses to play with as well. Our little prince rode off into the sunset…at 4pm. Ah.. winter!