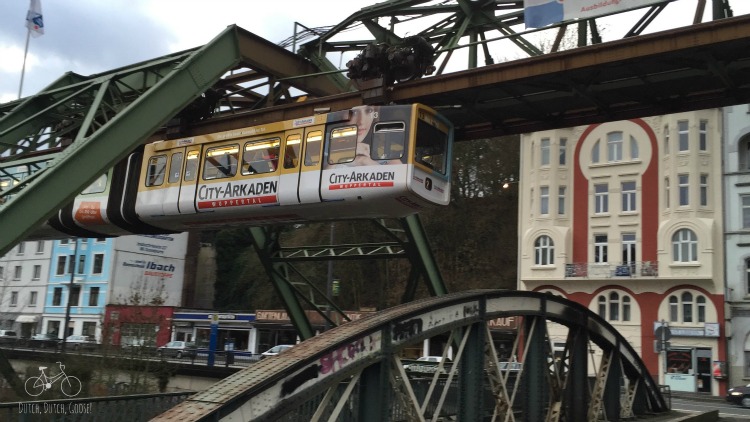 Topping off H’s 2016 Travel Wish List was the “upside down railroad” from his Big Book of Trains. Turns out the Wuppertal Suspension Railway is driving distance from our house and was on the way to some work related travel Jeff had scheduled. Our first stop in Wuppertal though was the Wuppertal Zoo. Parking is free in a lot down the street (down a big hill, incidentally). A combo ticket that includes transit on the Wuppertal Suspension Railway with your zoo entrance is available for the same cost as zoo admission. You can walk from the parking lot to both the zoo and the railway. The walk from the parking lot to the zoo is straight up hill and we were glad to have our travel stroller with us. The kids love zoos and this one did not disappoint. Wuppertal Zoo sits on 59 acres and is home to nearly 5,000 animals. The zoo opened in 1881, and while the main building betrays its age, and thus no longer houses animals the rest of the zoo is incredibly modern. The elephant house had two baby elephants as well as a bull, something you do not get to see often in the U.S. We were treated to a roaming sloth exhibit where both sloths were on the move. The one strayed from his ropes course to hang out in another exhibit and sample some of the tasty plants. One of O’s favorite exhibits was the bird house. You can watch and listen here to all the birds chirping away. In addition to animals the zoo is full of other attractions A large playground had H’s favorite German playground toy – a working mini excavator. It was only one Euro! (You can watch a video of the mini excavator in action here.) There were also a set of suspension bridges that cross over an aquatic exhibit. The petting zoo, which featured no animals on the day of our visit but tons of shovels and rakes, was a huge hit. The kids actually cried when it was time to leave and see more animals.

We could have stayed longer at the zoo but wanted to ride the train before it got too dark. We walked back down the hill, deposited a few things (like the stroller) in the car and headed off to the train. The Wuppertal Suspension Railway is as cool as it looks. It is built in 1901 directly above the river and tilts as it runs on its elevated track. You can watch a video of our train ride down the river here. We rode the train into town with no real plan, thinking we would walk around and find dinner. It was Sunday and most everything was closed. We found another station and headed back toward the car.

Even if you don’t want to ride the railway, watching it fly into a station is magical. You can watch a video of the train from underneath here and one of it coming into the station here. Finally, here is a video of the train leaving the zoo station. (If you have train loving kids it may be on loop like it is in our house.)

The best story about the railway though is about an elephant, Tuffi, that was loaded into the train in July of 1950 as an advertising gimmick. Somewhere mid-ride Tuffi became spooked and jumped from the train into the river. The elephant was fine, suffering only a bruised bottom.

You can download the 39 section audio guide to your ride on the Wuppertal here. We grabbed dinner at Da Vinci, a restaurant conveniently located near our parking lot (down the hill from the zoo). It’s a pizza and pasta sort of place, was child friendly and was there. The food was good and a great alternative to typical German fare.

We stayed the night in the Best Western in Wuppertal. The hotel had a pool and a wonderful breakfast. We were accidentally given a single room. My brain was spinning as I tried to figure out how we were all sleeping in there. We checked with the front desk though and were moved to a new room. My only complaint was the funny door locks at this place. I never quite got the hang of their strange electronic knobs. The next morning after an early breakfast we attempted to give the kids some outdoor time before the rain set in. Engelsberger Hof is in the neighboring town of Hilden, Germany and has a ton of great play structures. The kids loved the different structures and we had the place all to ourselves. Jeff even had some fun climbing on a real old steam train with cargo nets attached to it. When the kids got hungry for “second breakfast” we pulled out the leftover Da Vinci pizza and had a playground snack. The little train was a nice place to hide when the rain started. With a little more time to burn, and the rain pouring down, we headed to the Haribo factory store. There is plenty of free parking just in front of the store. We let the boys pick out some gummy treats to send to their friends back home. There were so many to choose from! We made a little bag of individual treats for ourselves so we could try the ones that were new to us. The store also had a collection of riding toys that were free. Our kids were the only ones in the store and rode them over and over. Little O even figured out how to push the start button so his ride never ended. When we checked out, the cashier gave the kids a collection of stickers, note pads and a little bag of the classic gummy bears really making the stop worth it. Our kids were over the moon.

The Bear & The Fox blog also took a trip to Wuppertal and found some great kids cafes and playgrounds along the way. If your are headed to Wuppertal check out her post here.